Just Deserts in The Negev

Only about 5% of Israel's wine grapes are grown in the Negev, which with its desert climate comprises over 50% of Israel’s land mass. With daytime temperatures in the Negev that often exceed 30˚C or even 40˚C during the growing season, it seems daunting or counter-intuitive to try growing quality wine grapes in the warmest region of the most southern part of a country that straddles the southern limits of where grapes can be grown in the Northern Hemisphere.

Yet one winery that seems to have burst the bubble of those conventional expectations is Midbar Winery. Midbar is Hebrew for desert and although there are several big wineries that have tapped into Negev vineyards, it's rare for them to promote the Negev as an appellation in the way Midbar does on the front of its label and even in its name.

So, how does Midbar make award-winning wines in what would seem to be an inhospitable excessively hot climate devoid of natural water as well as a white powdery topsoil not commonly associated with growing grapes or anything else for that matter?

Well, the geography isn't as disadvantageous as one might think.

Their vineyards are located in Mitzpe Ramon at the top of a crater 800 meters above sea level in the Nahal Zin wadi which provides cooler temperatures and breezes than lower altitudes and helps the vineyards mimic climate patterns of more northern and moderate climes. This isn't too different fromgood wine grapes and wines produced from higher altitude vineyards in similar climes in Arizona and in New Mexico in the United States.

With only two days of rain most years, the lack of water is not seen as a disadvantage as frequent and excessive rainfall can cause all sorts of issues in growing wine grapes in contrast to table grapes for eating. Each period of rain makes it necessary to spray fungicides,, so northern vineyards have to be sprayed 12-19 times a year, whereas Midbar only sprays twice. The lack of rain allows them to use drip irrigation (pioneered in Israel) and give the grapes as little water as possible .With wine grapes this can be critical to producing quality wines as vines, when challenged, release their aromas and other beneficial compounds earlier and in higher concentrations than they would otherwise. When left to their own devices wine grapes would mature later when they are ideal for animals to eat (and spread their seeds) rather than being ideal for making good wine.

Also typical of desert climes there can be a dramatic difference in daytime and nighttime temperatures (as much as 15˚C). Warm days help create sugar needed to make alcohol and develop fruity ripe flavors and aromas, while the cool nights help preserve the acidity of the grapes and the health of the vines. That natural acidity is one factor in a wine tasting vibrant rather than flabby, and also making it better for pairing with food as it delivers a longer more satisfying finish.

Of course, having the right vineyards is only one part of making good wine. With its unusual challenges, it takes a certain level of expertise to tend to those vineyards and steer them into the best possible wines. That expertise is delivered by native Israeli, Meital Damri from Beersheva, who studied Oenology (wine making) and Viticulture (grape growing) at the University of Florence in Italy.

As a young winemaker Meital's expertise has been bolstered by outside consultants such as Israeli, Doron Rav Hon of the Sphera Winery (and previously of Ella Valley), who now focuses on making only white wines, and Diego Ciurletti, an internationally acclaimed winemaker most closely associated with Panzano winery Cennatoio Tuscany’s renowned Chianti region. As Meital gains experience at Midbar, she and the winery are relying less on outside consultants. 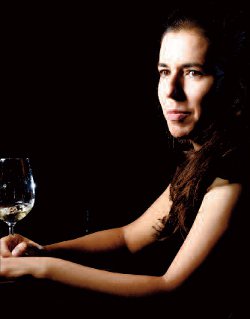 I recently tasted some of Midbar's wines with owners Itzhak Wolf and his wife Shelley Goldman who live in Tel Aviv's Hamedina neighborhood. Their apartment looks like a chef's restaurant inside with all wood floors (very unusual in Israel) and a kitchen many chefs might envy. Itzhak, in the hotel business, and Shelley, a former journalist/editor/publisher, make for a pair of amiable and more than capable hosts. It wasn't my first time tasting their well-crafted wines so I was optimistic that I would be sampling good wines and eager to see how consistent the quality was with delicious wines they poured me over a year ago.  I wasn't disappointed.

The 2014 Midbar Viognier Single Vineyard (K), 92 points, is 100% Viognier, showing notes of white peach, apricot, guava and smoke with a nice body. Itzak says all of the wines in the Negev have a bit of smokiness to them that some might think comes from barrel aging. White wines would traditionally be thought to be even more challenging in warmer climes than reds, so the fact that this wine recently won a gold medal as the best Israeli Viognier (at the Golden Cluster Awards, Israel's most respected competition) is not only a testament to Midbar making good wines in the desert, but to the fact that some of Israel's best white wines can be sourced from its most southern wine region. NIS 109

Also, of special interest to me is their 2014 Midbar Chenin Blanc Single Vineyard (K), 93 points. Chenin Blanc was once a popular white grape for making inexpensive wines in Israel that fell out of favor with Emerald Riesling, Colombard and Muscat of Alexandria becoming more prevalent. In 2007, the Sea Horse Winery started a resurgence, championing Chenin Blanc being used in premium white wines. Midbar and Netofa are two wineries which are now successfully adding to Chenin Blanc's reputation for making premium white wine in Israel. NIS 109With more floral notes than their fruitier Viognier, notes of pear, quince, honey suckle and cinnamon prevail with some Negev smokiness for which I'm developing a particular fondness. I'd prefer the Viognier with poultry or even veal and the Chenin Blanc with fish or salads.

In 2014, the winery made a conversion to making only kosher wines, and there is no drop-off or change in quality. In fact, they meet a requirement no other winery might dare to meet, - the Rambam's standard of kosher wines, which is 100% grapes with nothing added save sulfites. The winery actually has cameras monitoring production to verify that the wine is unadulterated. Even though the owners aren't Shabbat-observant Jews they want to ensure that it is as kosher as any kosher consumer might imagine or desire.

Midbar makes several other wines including white blends, red blends and single varietal Syrah and Cabernet Sauvignon. The only reds they have currently are Single Vineyard Syrah, Cabernet Sauvignon and Southern Red which were bottled unoaked in February 2014 and will be ready for drinking in September 2015.

Midbar wines are available at wine stores, bars and restaurants throughout Israel, or directly from the winery. Wherever you taste Midbar be assured you are getting good value for your money and that you are supporting development of the Negev, which will be crucial as Israel's population grows and its demand for arable land increases.

David Rhodes
2015-09-03
thanks for the kind words Shelley, and thanks for not calling me a critic...I'd rather keep the company of other wine connoisseurs than those who call themselves critics :) I'm glad to have revisited your wines after first meeting you last year and appreciate the consistency of quality that prompts me to give a winery an ESRA article which I only get opportunities a year to highlight...by the way I think the Jewish National Fund will reprint this for their newsletter and ESRA has given permission. They have a theme on water conservation in Israel so the story has some bearing
Frank Mecklenburg
2015-09-04
Well written and very informative. I was able to witness the crushing of the grapes yesterday.
shelley goldman
2015-09-02
A great article by an exceptionally knowledgeable wine writer and connoisseur .... it captures accurately the challenge and excitement of this new/ancient terroir ....in short, congratulations and appreciation to David Rhodes for his rare ability to explain and share his knowledge and expertise with wine lovers