Born in the Cape in 1921, Milton Tobias grew up on a farm in the Malmesbury area and was schooled at Paarl Boys High.  At age 16, he was invited to join the Cape Town Philharmonic Orchestra as he was already an excellent violinist.

At age 17, at the start of World War II in 1939, he voluntarily joined the South African Army.  He trained at Robberts Heights in the Transvaal, and played rugby in his spare time for the Northern Transvaal "Blue Bulls" Rugby Team.  He fought in North Africa, Italy, Germany and France and became an officer.

On April 24th 1945, Boykie helped to liberate the Dachau concentration camp and suffered nightmares for 25 years, and even stopped playing the violin for 18 years.

After the war, back on his parents' farm in the Cape in 1947, he trained 600 Machalnik volunteers for the Israel War of Independence in 1948.  The police visited the farm to stop the training.  However Boykie's father convinced the police that the Israelis were facing the same problem with the British that the Afrikaaners had faced with the British during the Boer War and so they allowed the firing training to continue.

In 1953 Boykie moved to Rhodesia with his wife, Sybil, granddaughter of Moses Rabinowitz, a pioneer in Southern Rhodesia and daughter of the first Jewish doctor there, Dr. Lionel Bergson.  He farmed there and did the first concrete gunniting for mines and silos.  He was a sports official in the Rhodesian Amateur Athletic Union and joined the Bulawayo Municipal Orchestra in 1963.

Boykie and his wife returned to South Africa in 1979 and continued farming in the Cape and later at Mooi River in Natal.  In 1991 he worked as the guard at the Durban Jewish Club until the visit of Ariel Sharon when there was a Muslim demonstration at the Club.

They made aliya with their daughter, Rose Richter, in 1998 and settled in Eilat.  Boykie had a super time there, making new friends amongst the Anglo retired community, growing flowers in the desert sand and playing the violin at schools, parties and functions.  From his side, there are 155 cousins here in Israel!

Boykie died suddenly, sitting on his couch in his lounge on December 8th, 2006.  He is buried in the Eilat cemetery, next to the grave of his late wife, Sybil, who passed away in 2002. 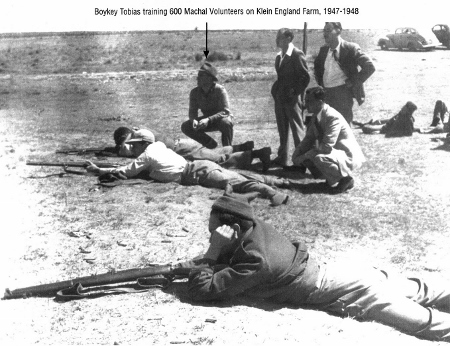 ESRAmagazine documents and illustrates the life of the English-speaking community in Israel. It keeps readers in touch with the community, with each other, and involves them in life in Israel. Cont...
More...