August 2016 marked 20 years since the modern city of Modiin was first populated. The first residents moved in time for the opening of   the schools on September 1, 1996.

I moved into the city on December 3, 1996, when some 700 families were already living here. I was the first to move into my building and about the fifth to move into the still unfinished street – Nahal Hayarkon in Malibu.

Families seemed to be scattered all over the place, very sparsely. It was only a full year later that I came across a congregation in my neighborhood that included a large number of English speakers.

One day, in February 1998, I overheard a young man standing in the aisle of the bus speaking English to someone about a meeting. 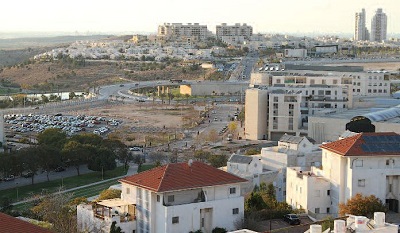 Modiin then (top) and now ... a view towards the Transport Circle  Photo: Anthony Green

When I asked him what it was about, he told me that there had been a first meeting of ESRA and invited me to attend the second one. He was Ralph Birnbaum, who, together with Reuven Lerner, had started the local English Modiin email list.

This second meeting brought me face to face with a group of enthusiastic young people. The group had previously decided on a list of activities and who would be  responsible for them, while the second meeting involved a short discussion on how each function would be taken forward.

The following were active members and the committees they headed: (information taken from ‘The Modiin ESRAch’ issue 2 Nov/Dec 1998):

Toward the end of the list was an item entitled Older People. The discussion centered on whether there was a need for it. As I felt that it was specifically “older people” who had difficulty with Hebrew, it was especially necessary to provide for them. Since I was one of the older people at the meeting, it became my responsibility. 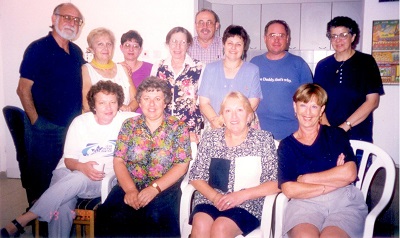 Together with Joan Lester and later on, Stella Padeh and Sandra Apperman, we formed a group that would meet every month on a Saturday night in someone's home. The group became known as 48+.

It was decided to have a large, introductory get-together. At that time there were no suitable venues for events, but we managed to obtain the use of the lobby in the municipality. We drew up a questionnaire, put out notices on bulletin boards throughout the city and a notice was posted on the local Modiin List. 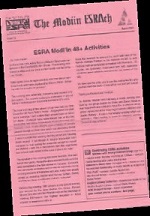 The night arrived – May 16, 1998 – and to our delight over 200 locals attended, as well as ESRA leaders Merle Guttmann (founder and president), Audrey Goodman and Adele Hunter (co-chairs), and Adele Rubin, (coordinator of social services and volunteering). ESRA's Modiin branch was taking shape.

We produced a magazine in English to update English speaking residents not only about ESRA activities, but also about developments and activities taking place in the new city. It was called The Modiin ESRAch (see left) and was edited by Jackie Rosenzweig and Julie Zuckerman. Lisa Isaacs did a great job with the layout and graphics and Rona Michelson helped with distribution.

I produced a list of names, addresses and phone numbers for the various institutions and reliable tradespeople who were available at that time.

As more and more people made Modiin their new home, more meetings took place as well as activities for children (Story Hour and Mommy and Me, started by Rona and continued by Sandra).

Books were collected for the library, newcomers were welcomed, etc. Community events were held, such as an ice cream evening in the summer of 1999. There were no ice cream franchises in Modiin yet, and it was a challenge to obtain a large quantity of ice cream and keep it frozen at the height of summer. I worked next door to an ice cream factory and managed to get a good deal. Rachel Max served as taxi driver, and we managed to keep the ice cream more or less frozen all evening!

We also held a successful yard sale, and sold ESRA’s Ethiopian embroidered products. Close and lasting friendships were made through all these activities. 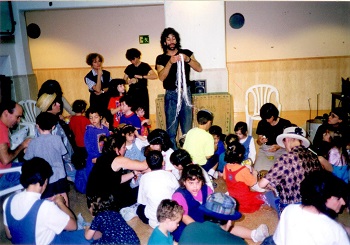 Entertaining the children in those early days in Modiin

One Friday morning, the late Professor Yair Parag took us to see the Hasmonean burial caves that were discovered along Route 443, just east of Mevo Modiin. Yair was a founder of the Society for Preservation of Sites and Landscapes in Modiin.

The main road between Modiin and Maccabim is called Sderot Yair Parag. It was a privilege to know him and an honor for our group to be guided by him. The photographs I have from that day are precious.

When Stella Padeh arrived in Modiin, things progressed steadily with her guidance, as she had worked with the main ESRA office in Herzliya and knew the personnel.

From time to time, representatives from the ESRA Executive came to Modiin to offer encouragement, suggestions and help when needed.

Our 48+ activities went from strength to strength. We had a good turnout at every meeting with interesting speakers.

One time we went to the new Luciano's pizza restaurant at Mevo Modiin. We had made reservations, but for some reason they were not ready for us. So, we waited a bit longer for our pizzas, enjoying each others’ company.

Another time we were invited by our guests from Kfar Daniel to spend the evening with them, which was also very pleasant.

Looking back, I am glad that I spoke up for ‘older people’ at that second meeting. 48+ continued for many years, served its purpose, and, in fact, it was the last remaining activity from those times and was finally adopted by the municipal Olim department about 12 years ago.

ESRA Modiin today is managed by others but is still giving a lot to the community. The needs in the old days were so different, but the work we did then is no less important.

All it took was a week, and I felt at home.

I came to Modiin in 1999, from Jerusalem. I had left behind friends and the familiar to come to a strange new city where I knew absolutely no one.

On a visit to see the city prior to moving there, my daughter suggested stopping by the municipality to get any information they may have regarding activities offered and of interest to me.

It was there that I found a reference to an English speakers’ group which attracted me. Although I spoke Hebrew, when you are in a strange place with new faces, something familiar is very inviting and comforting. I found out that ESRA was meeting that week. 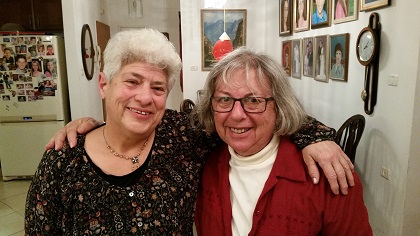 So off I went to my very first, but by no means last, ESRA meeting. I was greeted by friendly faces and an interesting agenda, and that was the start of a new relationship.

At that meeting, I made new and lasting friends and was immediately recruited by Rona Michelson who promptly declared that I was perfect for a new project: Children’s Story Hour. By the end of that week, I felt at home.

It didn’t take long before I became very active in ESRA. It was a way to give back a little of what I received. I was part of a creative, active and very motivated group that worked well together to provide interesting and supportive programs and activities for the English speaking community.

I presented a bimonthly story hour in the park, which included a creative activity. It attracted 15-20 children each time.

Marion Stone created a business and important numbers list. That list became my main reference for a very long time. We created an annual garage sale, a single parents’ group, and an ADHD support group.

There were so many more activities created over time that met the needs of the ever-changing English speaking community, but all drew interest and were successful.

A bit of Humor