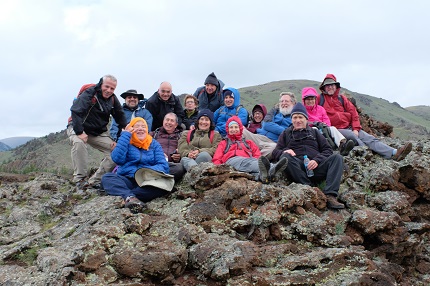 Having a lava-ly time ... the group rests after climbing to the top of a volcano in Northern Mongolia

Story and photos by Jeri Hahn-Markowitz

I recently returned from a two-week trip to Mongolia with a group of lifelong friends who have been part of my journey from Spring Valley, New York to my life in Israel.

The “ken”. A branch (“ken”) of Hashomer HaTzair, a Socialist-Zionist youth movement with origins in pre-World War I Europe, was opened in Spring Valley, New York, in 1971 when I was 14 years old. This was initiated by Judy Tischler, herself a product of “the movement”. Judy and her husband Arieh, who had survived the Holocaust, wanted their children (twins Mira and Marva, then 13, and Gary, then 9), to experience all that the movement had to offer, intellectually and socially. The ultimate goal of the movement was aliyah to a kibbutz. The stage was set.

The Spring Valley ken grew quickly and my sisters and I were among those interested in learning more about Israel and making new friends. The activities of the ken and older branches in the boroughs of NYC, Philadelphia, Boston, Chicago, LA and Montreal were many and dynamic throughout the 1970s, including summer camp, winter camp, political activity, learning, and preparation for aliyah among the older members (aged 18 and up, depending on whether or not they first attended college in North America).

And so it came to pass that a group of 55 young adults, a “garin” (settlement group), made aliyah over the course of three years to Kibbutz Harel in the Jerusalem corridor, from 1974-1977. Most spent two to seven years on the kibbutz before returning to North America. Twelve remained in Israel, nine leaving the kibbutz for city life, graduate studies, developing careers and raising families.

Reuven Amitai (born Kahn), originally from Philadelphia and active in the ken there, moved from Harel to Jerusalem in 1982 to pursue advanced degrees in medieval Middle Eastern and Central Asian history. Over time, he became a well-known scholar. In 1991, Reuven made his first trip to do research in Mongolia. 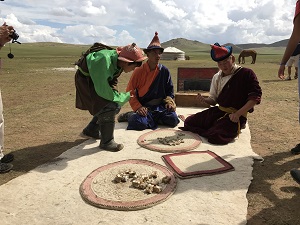 Your move ... Nomads in traditional dress play a typical game on the Mongolian steppe

As Reuven's career advanced, eventually including professorship and an appointment as Dean of the Faculty of Humanities (2010-2014) at the Hebrew University of Jerusalem, so too did those of others from the garin to Kibbutz Harel. Some married fellow American “shmutznikim” (members of HaShomer HaTzair), while others married sabras. A small group, mostly comprised of guys from Philadelphia and gals from New York, gather each Yom Ha'atzmaut to celebrate their long and deep friendship and the birthday of the land they chose to make their home years ago.

A few years ago, Elana Dorfman (Brooklyn, Jerusalem, Harel, Boston and finally Haifa), said, “Let's organize a trip to Mongolia and Reuven will be our guide.” Last year several of us began to seriously consider making this dream a reality. We agreed that if we could get a minimum of ten participants, we'd make this happen.

We set a date and let all those from the garin and others, both in Israel and abroad, know about the trip. Ultimately we were a group of 15, mostly former Americans who live in Israel, including Mira Tischler Edelstein, whose mother began the Spring Valley ken. Other participants included a former garin member who previously lived on Harel and in Tel Aviv and now resides near Washington, D.C., a Canadian couple (one a former member of the garin who spent seven years on Harel), his brother, who has been living on Kibbutz Shomrat, near Acco, for 47 years, two Israeli spouses and an Israeli couple, not connected to the movement and new to the group.

On August 2, 2017, we met in Ulaanbaatar, the capital city of Mongolia. The complex logistics of planning and executing a successful trip to this relatively untouched country were handled brilliantly by Ron Oren, an Israeli who has lived in Mongolia for 18 years, and who owns and runs Mongolian Ways, an impressive tour company. The outstanding services we received included a superb local guide, a varied itinerary, rich with thousands of years of history and culture, breathtaking natural scenery on the Mongolian steppe, lodgings in “ger” camps (a ger is a traditional Mongolian tent, round in shape, covered with layers of felt, sometimes called a “yurt”), meals, entrance to sites and transportation in jeeps by skilled, tireless and friendly drivers.

Of course in addition to all that, Reuven enlightened us along the way with animated history lectures at museums in Ulaanbaatar on our first and last days, reading passages from source material he had sent us before the trip, at appropriate memorials and various other sites of historic significance. The history of Mongolia, leading to the rise of Chinnghis Khaan and up to the present day, came alive as we came to understand and appreciate the impressive achievements of Mongolians, not only as warriors but as politicians and as patrons of the arts and education.

Lessons by group member Professor Yossi Yechieli, a geologist, explaining the rock formations, soil and water at various sites and other natural phenomena, enriched our understanding of our host country's physical make-up and the harsh terrain. Dr. Roni King, a veterinarian, became known for asking the drivers to stop the vehicles so that we could get out of the jeeps to photograph yaks, sheep, horses, cows, birds and wildflowers. 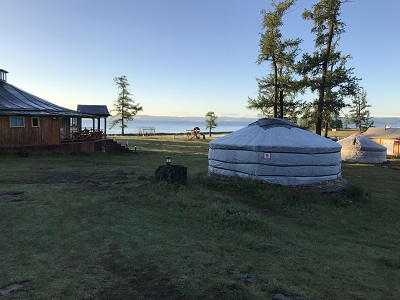 On our travels we drove over rocks, in mud, through forests, on dirt paths, across rivers and on few paved roads, which exist predominantly, but not exclusively, in the capital city. We saw Buddhist monasteries (Tibetan Buddhism is the predominant religion in Mongolia), ancient gravestones from the Bronze Age, archeological artifacts and art that document history. Visits were made to several nomadic families, who each live in gers, tend their herds of sheep, goats, yaks and horses, and make much of their own food and other products. We enjoyed their hospitality, listening to authentic Mongolian music (including throat singing) and observing them in other typical activities, such as playing a game with dried knuckle bones, wrestling, archery and horseback riding. We watched cow milking and horse milking and the production of a type of cheese as well as that of Mongolian vodka. One unique type of nomadic tribe is known as the Reindeer People, numbering 300 in all of Mongolia (and limited to the north of the country). We petted the velvety antlers of these gentle animals and were excited to meet them “in the flesh”. Nomadic life is harsh and isolated in our eyes, however it's the only reality known to these people for many generations. Children learn to ride bareback at a very early age and help with all chores until they begin to attend school, often boarding there due to the distance from each provincial school to their homes. 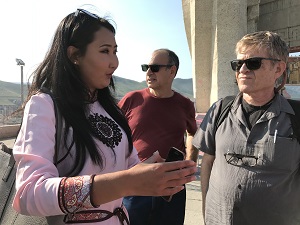 In addition to seeing sites and learning, there were opportunities for leisure activities, including soaking at hot springs and horseback riding. Elana prepared and delivered a drasha for each of the two Friday nights, after which we sang and welcomed the Shabbat.

This description is of course superficial and by no means all-inclusive of the breadth and depth of experiences we had during our twelve full days in Mongolia. Needless to say, one of the highlights was sharing vacation time with friends (some of 50 years). Most of us are in our early sixties and none of us let the more rustic aspects of the trip (such as the rough terrain and the communal bathroom facilities of varying quality) interfere with the pleasure we derived from each day's new experiences and the joy of spending quality time together.

At our farewell dinner we began to discuss future trips to other countries. Our trip to Mongolia, however, will remain indelibly impressed in our memories as a special, exotic and wonderful experience.

■Dr. Jeri Hahn-Markowitz, who made aliyah from New York in 1979, is an occupational therapist and works with people who cope with ADHD.

Advertisers Directory 192
From Bible to Bedouins and Battles

Dr. Jeri Hahn-Markowitz, who made aliyah from New York in 1979, is an occupational therapist and works with people who cope with ADHD.