Recently at the Kfar Shmaryahu social club we once again welcomed Dovik and Yael who in the past have shown us Tibetan bowls.  This time they entertained us with unusual musical instruments.

The meeting started with a short session of meditation accompanied by appropriate music and guided imagery so as to get us into the relevant mind set.

Dovik then demonstrated the special instruments that he had brought with him including several sized versions of what he called in Hebrew “harp bells”. This is an instrument made of steel tubes in a five or six sided wooden frame played by beating on the tubes with a variety of “drumsticks”. The sound that is produced by the instrument is somewhat like the sound of a harp. The instrument can be turned while playing so as to produce further reverberations.

He also showed us another interesting instrument that looked like a circular long piece of wood. The wood had been hollowed out, rice grains had been inserted and then the wood piece had again been closed off so that when he turned the instrument around the grains produced a tinkling sound.

He demonstrated his instruments in conjunction with his electronic keyboard that played a pre-prepared accompaniment and gave the group participants a very small taste of the musical options that he has at his fingertips. The music that he played was soft and soothing, appropriate for meditation and massage.

We then had a birthday celebration for those members who had a birthday this month with a pleasant musical accompaniment provided by the variety of musical instruments that we had been shown. 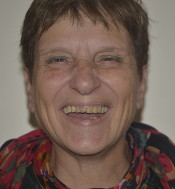 Shifra Neumann was born and schooled in Manchester, England, in 1953, to a large family where volunteering and helping others were an essential part of her upbringing. Says Shifra: “As long a...
More...