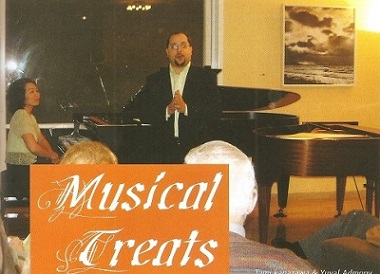 Kfar Saba bills itself "The City of Music," and ESRA has certainly proved this to be true.

On December 30, 2006, ESRA Kfar Saba was once again privileged to present Tami Kanazawa and Yuval Admony, professionally known as the Kanazawa-Admoni  Piano Duo - in a wonderful evening of two-piano music. This remarkable duo - a couple both onstage and off - performed works by Gershwin, Rachmaninoff and Liszt which delighted the capacity audience.

For the second time, Benny and Irina Miller graciously hosted ESRA in their lovely home for this very special evening. Benny's forte is buying, selling and tuning pianos in the Sharon area.

Though they make their home in Israel, Tami and Yuval travel the world, regularly performing throughout North America, Europe and Asia, both in concert and in competitions, where they have won many gold medals. Yuval Admony is currently the Artistic Director of "The International Piano Duo Festival in Israel," which began here in 2003. Both he and Tami conduct master classes here and abroad for aspiring young pianists.

Then, on February 22, we had another musical treat - a morning with the wonderful Barbara Blum who acquainted us with the life and music of Jacques Offenbach (born Jakob Eberst in Germany, son of an itinerant cantor.) As only she can, Barbara brought us back to mid-19th century Paris and to Offenbach's Bouffes Parisiens musical theater where he staged his unique style of musical entertainment. From there he went on to great success throughout Europe and the United States. One of the highlights  of the morning was a recording of his famous "Can Can," which brought smiles to all our faces.

Once again, Naomi and Eli Resnick  invited ESRA into their home which is the perfect venue for a Barbara Blum  presentation. The Resnicks are recent immigrants from Florida, U.S.A., and Naomi as already an enthusiastic member of the Kfar Saba Committee.

How fortunate we are here in Kfar Saba to have the Millers and the Resnicks as such good friends and supporters of ESRA. Their generosity allows us to host outstanding musical performers and lectures for the enjoyment of ESRA members and their guests.

We plan to present more such intimate musical events in the future and we hope that many of you will be able to join us.

Shakespeare and his Readers

Gert came on Aliyah in 1976 from Philadelphia, USA. She has a BA in English literature and almost completed her Masters in teaching. She has worked in Family Planning and Development and Public Relat...
More...