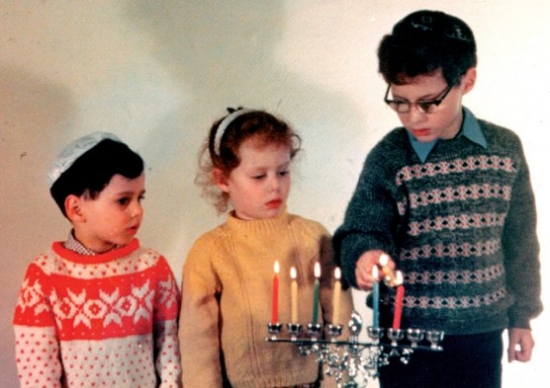 The children of Mike Finestone, lighting the Chanukiah of Rev Morris Rosenbaum, 1967

My Chanukiah is both a sad and a happy story

My family goes back many generations in England – my children are at least thirteenth generation British born (but we’ve stopped all that). My grandmother on my mother’s side was one of eight girls born to the Reverend Jacob Lesser of Dalston shul– anyone remember them?  One of these girls, Harriet, married Reverend Maurice Rosenbaum, a brilliant man who allowed himself ten minutes to complete The Times crossword each day.  His name is still found in numerous religious books with deep thanks from the authors for his invaluable help.

Maurice and Harriet had four children, two girls and two boys. One of the boys was a ‘black sheep’, I believe, and was never referred to. None of the other three married. The second son, Jack, died leaving the two girls, Netta and Marie, living in the large family home. After many years, they decided to sell up and go to live in a retirement home. They sold and distributed the household belongings but were left with the problem of what to do with the beautiful Chanukiah which they wanted to pass on to someone who would use it. The extent of the family at this stage can be guessed when one considers that there were eight sisters on their mother’s side alone (I do not know what family Uncle Maurice had). They carefully scoured the whole family and from all the descendants of both sides they could find only one person who would use it. That is how I got it.

The attached blurred photo was taken on the first Chanukah after we got the Chanukiah,1967. As this was taken over 40 years ago, the children have grown since then.

A bit of humor
Kabbalah For All

Mike Finestone was an Optometrist and Hearing Aid Practitioner. He was born in 1930, in Southport, U.K. and educated at Croxton Preparatory School and King George V, Southport, Kirkham Grammar...
More...