A bridge too far ... for the faint hearted

I am not too good with heights, especially when between feet and solid ground is a not-exactly-motionless suspension footbridge. Couple that with what would seem to me far too many fellow crossers of the deep divide between the hills where said bridge is strung, swung and definitely swinging at the time of my adventurous crossings, you can understand why my nervous system kicked into top gear.

No. I have not been on a trek to some far flung, end of the world outback as fast approaching being pensioned off. Neither, as about to be put out to grass,am I trying to recapture my youth, nor emulate my Israeli born kids who during their post army period travelled wide, tested the elements whether waters, mountains, volcanoes - the more dangerous the better.

Nothing like that at all, but just a day out with my children and grandchildren on the Carmel Mountains, where we literally had a swinging, sometimes stomach-turning but in the end, enjoyable experience traversing the Hanging Bridges at the JNF-KKL Nesher Park, gingerly making our way over a deep gorge on one bridge and returning eventually to point A on another a short walk higher up the mountain.

There was a sign saying what the maximum number of people should be on the bridge at any one time, but there wasn’t anybody counting and I absolutely feared to do so!

Created from 70-meter steel cables, the Hanging Bridges are suspended across the Katia Gully, and although the shrieks of delight and fright of some small children (and a couple of adults) walking across were quite ear piercing at times, birds of a feather stuck together with a high-pitched chorus of their own as they flew above the gorge.  Apart from the amazing – well, to look at anyway – bridges, one wallows in large open green spaces, clearly marked footpaths leading to jaw-dropping vistas over and beyond the tree tops of the JNF-KKL planted forests on the lower hills of the Carmel range.

Apart from these forests, there are large tracts of natural woodland where oak and terebinth trees, and arbutus (also known as Greek strawberry trees) are abundant as are many different species of bushes, shrubs and undergrowth.  Bugs of all shapes and sizes thrown in for good measure delighted the grandchildren of course.

Observation points, both man-made and natural, afford breathtaking views over the Haifa Bay area, taking one on a visual journey up along the coastline to the white cliffs of Rosh Hanikra and the mountain range that creates a natural divide between Israel and Lebanon.

Ships out at sea waiting to dock at Haifa port line up in the near distance, Israeli naval vessels and a few large cruise ships between them seem to be taking an awful lot of space in the harbor itself.  Land, sea and air – and very fresh the latter is on the hilltops – at their very best. When a small aircraft takes off from Haifa airport it feels as if with a slightly outstretched hand it would be just possible to pluck it out of the lower reaches, but it is off and away flying south before one can say Biggles.

Carefully making our way, crocodile fashion, along a narrow, rocky pathway hugging a few ominous-looking cliffs above, a family rests up in front of a magnificent rock formation reminiscent of the open jaws of a monster, fangs and tonsils thrown in for good measure. Although a somewhat precarious picnic spot, the attractive ledge overlooks a large expanse of the Haifa to Acre coastline, all bathed in sunshine, with the sea and sky vying for the bluest hue in Mother Nature’s coloring box that day. 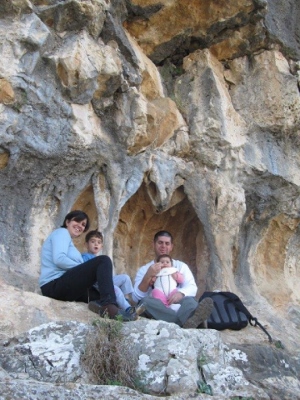 In the jaws of Mother Nature ... Ihab Zeidan and family

A short conversation with the four-member family perched on high between “fangs” and sky was one of the highlights of the day. The gentleman was Ihab Zeidan from the nearby Druze town of Daliyat al-Karmel. A tour guide by profession, he was out and about with his wife and children not far from their Mount Carmel home. If we hadn’t already been bitten by the beauty bug of our surroundings on the mount, then Ihab’s enthusiasm and passion for the area where he lives and sometimes guides Israeli and overseas tourists on hikes certainly would have done the trick.