To the Negev for Inspiration

Encouraging movement in the hydrotherapy pool at Aleh Negev

A bus full of ESRA members left Modiin, traveling southward for a day of experiences and learning about what is happening these days in the Negev desert. On the way, our guide, Avraham Kalman, former Head of Tourism at JNF and a veteran guide, gave us a lot of background information about the solutions providing water supply to farmers, industry and private homes, and other developments before we arrived at our first stop, Aleh Negev.

Aleh Negev is a facility for children, youngsters and young adults with severe disabilities. Its therapeutic rehabilitation programs are an example to the world.

The center was founded in 1982 by former Major General Doron Almog whose son, Eran, was autistic from birth with Castleman’s Syndrome, and for whom there was no educational or care framework. Together with a group of parents with severely disabled children in the same situation, Aleh Negev came into reality. Doron and his wife, Didi, had always spoken openly about Eran and his condition, with disregard to any stigma or negative social attitudes. Their approach is very apparent at Aleh Negev, where the residents and outpatients are treated as normally as possible.

There we witnessed a spirited procession of residents, parents and carers, dressed up in jolly fancy costumes, since this day was Rosh Hodesh Adar, the month in which the festival of Purim falls.  We visited the specially equipped hydrotherapy pool in continuous use to help boost youngsters' motor ability. The center is beautifully landscaped with a uniquely designed amphitheater with accessibility for wheelchairs.

We also had the opportunity of purchasing various items crafted by residents, such as ceramic hamsas and silk scarves. The salespeople included a disabled young man in a wheelchair, whose head was lowered and who did not speak, and a counselor alongside handling the sales transactions. This was just one example of Aleh Negev's efforts at inclusiveness. Integrating their youngsters into society, irrespective of disability, underscores how each person is valued and can contribute.

A hospital wing is being planned initially with 28 beds, and it is hoped that it will grow into a full-sized hospital with a research department. Perhaps most impressive of all was the sense of family and camaraderie in the relaxed and friendly atmosphere. Most assuredly, Aleh Negev responded to a need. It may not be high-tech, but it certainly qualifies as another jewel in the crown of Israeli innovations. 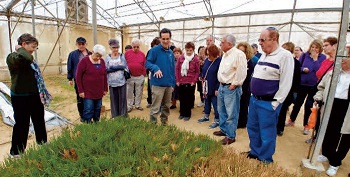 Experimenting with crops irrigated with saline water at Ramat Hanegev

Our journey continued to Kibbutz Revivim, which was one of first three "Tower and Stockade" settlements set up overnight in the summer of 1943. Their very presence influenced the UN to include the Negev as part of the State of Israel. Revivim's few members fought thirst and isolation, as well as the Egyptian forces during the 1948 War of Independence.

Our visit took us to the Mitzpe, the reconstructed original dwellings of settlers, and today a museum. Mitzpe Revivim was besieged in 1948 by Egyptian soldiers and the hard battle was won by a handful of pioneers and Palmach soldiers. We visited the tower and stockade, trenches, positions and bunkers used for shelter and storage, and an exhibition of items from that period as well as communication and residential rooms, showers, the dining room, old agricultural tools and tractors and even the small aircraft that were used for transport. The brief but moving visit dramatically displayed yet again how the courage and ingenuity of a few changed the course of the war.

As an aside, in 1937, there were no pipes in place for bringing water south to the Negev. The Negev at that time was dry wasteland, a no-man’s land of no value other than strategic, and the Egyptians were ready to take the land for themselves. The British were interested only in looking for oil, which they didn’t find, but they found highly saline water, which was drinkable, but left untreated, and it carried the risk of disease. Keren Kayemeth's Josef Weitz wanted to experiment with the land, and an experimental station was established on the site of today's Revivim, not intended at that time for settlement. The original pioneers, who came from Rishon LeZion, a town that had also resolved a water supply problem some 30 years earlier, lived in the caves and a well was 9 km away. The Bedouin owners demanded payment for the water, and whenever there was friction between them, the settlers were unable to obtain water. The water project ran between 1944-1946, when a channel was dug to collect floodwater. In 1959, the Yarkon-Negev Pipeline began to bring water to the Negev Desert. Today we take Negev settlement for granted, but actually the plentiful water supply is a miracle resulting from courageous hard work, which should never be taken for granted.

Our picnic lunch in the shaded Park Golda was a surprise. Although the lake was empty due to lack of winter rains, this beautiful oasis in the desert is worth a stop on any trip through the region.

The tower (“tallest in the world”) of the new Ashalim Thermo Solar Power Plant several kilometers away from Revivim is very visible, and up close, its 250 meters height towered over us. After security clearance, we were able to drive through the site that covers a large area. When in operation the plant will provide 440GGWh per year of electricity. This is expected to reach 10% of Israel’s power by 2020.

As we drove through this field of hundreds, if not thousands of mirrors, collectors, pipes and tubes, we were told that the mirrors’ angle is adjusted by a GPS system as the sun moves. The mirrors concentrate solar power onto a receiver tube that heats oil, which in turn heats water for steam. The steam drives the turbines, which produce the electricity.

The electricity is clean energy, with environmental benefits, all according to international standards, such as:

It is expected that this 2.8 billion shekel installation will be fully operational by July 2018, and it will have paid for itself within 25 years, thereby lowering the cost to produce power.

Afterwards, we travelled to the nearby Ramat Hanegev R&D Agroresearch station, one of ten in the country. Each station is located in a different area of Israel, with different soil, climate and water conditions. The research stations do not work with GMO (genetically modified organisms) because Israel complies with European prohibitions.

At Ramat Hanegev they test the growth of various crops utilizing the plentiful underground saline water, conduct pest control, introduce new crops, and, with an eye to commercial interests, market the sweetest, reddest and largest organic strawberries I have ever seen.

Ramat HaNegev covers 22% of Israel. 95% is assigned as a nature reserve or for military use. Forestry affects climate, and carbon emissions may also affect climate. Weather in the Negev can become cold and there is sometimes snow in Mitzpe Ramon with an average 20mm of rain annually. Crops that need cold, such as grapes, apples and almonds can be grown. A flourishing wine industry has developed. Olives can also be grown but the saltiness in the water affects the yield, although the resulting oil is a richer quality. What is most amazing is that despite the salinity of the water, crops are generally larger, sweeter and have a longer shelf life.

In the experimental greenhouses we saw strawberries being grown in bags, courgettes with their flowers that are used in fashionable cooking, tomatoes and aubergines, also with a beautiful mauve colored flower. The research station has a small shop where refreshments are available, and locally grown vegetables and fruit, as well as some ceramics on sale.

Our day in the Negev was filled with new experiences and we gained special knowledge about Israel's remarkable accomplishments in that part of the country. A truly awe-inspiring day. Thank you ESRA Modiin for such a fabulous tour.

Milestones 195
From Bible to Bedouins and Battles