When I visit Britain there is usually little time for going to the cinema as most visits are work-related and I find myself on the move between synagogues, youth clubs, schools and university campuses.

However, during my last such visit to England I managed to squeeze in a cinematic break at a local Odeon cinema.  The film was disappointing but not the answer to my question as to the source of the cinema chain's name.

I discovered that what I could have termed my weekly house of worship when living in Wales or England prior to aliyah many years ago, had a deep Jewish connection indeed as it was founded by a Mr. Oscar Deutsch and Odeon is an acronym for 'Oscar Deutsch Entertains Our Nation.'

This was not the only connection I discovered with Mr. Deutsch.

He was born in Birmingham and so was I, although I rarely admit to it as I consider myself Welsh through and through.  My mother was from Birmingham, my father from Ystrad Mynach, South Wales and apart from the first few weeks of my life, most of my childhood and teen years were spent in Wales.  Even now, forty years down the Israeli line there are those who spot a Welsh accent in my English, apparently more pronounced when speaking Hebrew.

Birmingham, where I still have family and friends from the time there in my late teens, was one of the cities I visited on my last speaking tour in Britain.  I was asked to address pupils at Small Heath high-school, youngsters in the city's Jewish school as well as the Liberal Jewish Synagogue community.

Birmingham is home to Britain's second largest Muslim community so I shouldn't have been surprised that over 80% of the Small Heath pupils were Muslim and of Asian background.  However, I did a double take upon discovering that 70% of the local Jewish school pupils weren't of the Jewish faith but Muslim and Hindu in the main.

To top it all off, I met with the Liberal Jewish Synagogue congregation in a Friends Meeting House (Quakers) being used by the community whilst a new synagogue is being constructed.

Birmingham had changed so much that I hardly recognized anything in the city center except for city hall.  Even the hospital where I had worked in the 1960s had been pulled down and replaced by some of the most exciting and adventurous architecture I've ever seen.

The rather dismal and crumbling city center I had known had not only been given new life but was teeming with people pouring out of high-rise office blocks on lunch break or shoppers frequenting the area I knew as the then out-of-bounds Bull Ring but now a new millennium shoppers' paradise.

Oscar Deutsch, who was born in 1893, came from the same neck of the woods as the high school pupils I addressed, and like them, was the child of immigrant parents. Oscar's father was a scrap metal merchant who hailed from Hungary and his mother from Poland.  His first Odeon cinema was opened in Perry Bar, Birmingham and by 1930 he had opened no less than 258 cinemas throughout the land. 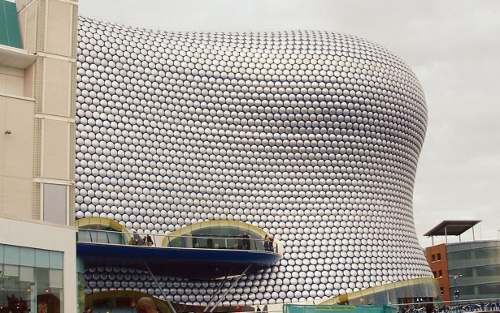 The legendary Oscar Deutsch died from cancer when he was just 48 and his cinema empire was taken over by J. Arthur Rank. However, the visionary cinema mogul still has his name up in lights in many British cities and towns as the Odeon cinemas continue to entertain the nation to this day.

Most folks know of the Birmingham connection to Cadbury and Bournville chocolate and their more that sweet connection to the Quakers, but Birmingham is also where H.P. Sauce and Bird's Custard were developed and manufactured.  The Bird's Building is now the site of an arts and entertainment center called "The Custard Factory" and another household brand name of the 1950s and sixties Rock'n Roll era of more than greasy-looking hair Brylcreem was also 'born' in Birmingham.

Strolling around the tranquil and spruced up landmark canals and wharf areas like Gas Street Basin, one feels Birmingham's long-gone industrial past meeting in the most attractive ways with the pulsating city of modern times.

I spotted a signpost pointing to the Peace Garden and after a short walk found myself in a rather attractive memorial area created in 1998 when the G8 summit was in town.  Eight trees were planted in the small park commemorating the summit attended by Bill Clinton, Tony Blair, Jacques Chirac and Boris Yeltsin among others.

Firmly embedded in the center of the park is a two meter high Peace Pole of the World Peace Society, one of 200,000 such poles spread throughout the world upon which is written 'May Peace Prevail On Earth' in English on one side, Japanese on another and local lingo on the remaining two sides.

Such a peace pole is firmly embedded in the ground at the Givat Haviva peace education center in Israel as well as in Bethlehem and alongside the Allenby Bridge and also by the pyramids of Giza.

Around the peace pole and eight trees planted by the 1998 world leaders are gardens, and on bronze plaques verses in Arabic from the Koran as well as verses from the Bible in English and Hebrew.

This seemed a more than fitting way for me to end my few days in the city talking about peace education projects involving Jews and Arabs in Israel.

A short visit to Birmingham re-opened the door to part of my past whilst reconnecting to what the local tourist board terms as the 'new' city.