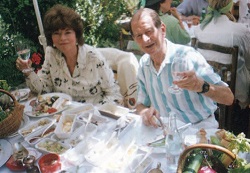 Sheila Ottensooser died in August 2015 and Richard Stein, former Chairman of ESRA, attended a memorial service for her in London as a representative of ESRA.

This gift came about as a result of the friendship I (a former chairperson of ESRA) and Mike, my husband, had with Sheila and Eliezer Ottensooser for over 60 years, first in Israel and then abroad. We were at their son Gavriel's brit at the Sharon Hotel where Eliezer was deputy manager in 1956. Our son, Ilan, who was born a few months later became Gavriel’s friend till Gavriel died of cancer a few years before his parents retired and moved to Cannes France. 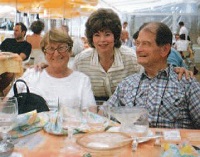 Left: Sheila Ottensooser with Mike Rubin at the entrance to St Paul de Vince in 2001.  Right: Adele Rubin (left) with the Ottensoosers in Cannes, June 2001

We often visited the Ottensoosers in England where Eliezer (who came from a well-known German banking family) became a very successful Insurance Broker. We went to London in 1999 for Gavriel’s memorial service.

We also visited Sheila and Eliezer in Cannes soon after they moved, and as usual we had a wonderful time with them. Unfortunately Eliezer died suddenly soon after. 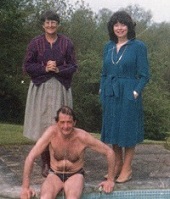 The Ottensoosers with Adele Rubin in May 1989 in the garden of their London home which overlooked the River Thames.

We kept in touch with Sheila and tried unsuccessfully to encourage her to come to a retirement home in Israel as she was mostly confined to bed with a bad back. I occasionally sent her the ESRA Magazine and then, at my request, Brenda Katten, who had met the Ottensoosers in London, arranged that ESRA regularly send Sheila the magazine. Through reading the magazine, Sheila became interested in ESRA and its projects, including what we were doing in Sderot.

We knew little about the bequest although in one of her regular monthly conversations with Mike, Sheila asked if ESRA was still functioning and said she was considering including it in her will.

We are proud and pleased that our friendship and staying in contact over many long years have borne fruit.

Adele Rubin came to Israel in 1951 from Cape Town South Africa after completing a first degree at Cape Town University. Upon marriage to Mike, she left Jerusalem for Tel Aviv. She has 2 children and ...
More...