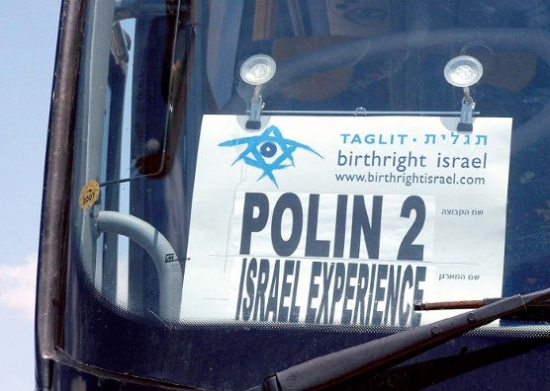 A few hundred Polish citizens recently met in Krakow to share a relatively newly discovered fact of life – that they were Jewish.

Most of these ‘new Jews’ in Poland discovered their Jewish roots because an elderly, often dying parent or grandparent didn’t want to pass away taking the carefully guarded secret that they were Jewish with them to the grave.

In some cases, where young people had become involved in anti-Semitic organizations, a close relative had decided it was time to tell them of their own Jewish background, jolted by the fact that their own post-war kith and kin could gravitate toward such shocking sentiments.

For the close family of those Jews hiding their real identity, people afraid to be discovered to be Jewish knowing it would mean certain death during the Holocaust years, the proclamation that their loved one belonged to the Jewish people – and therefore also they themselves – was somewhat difficult to handle.

Three years ago, Beersheva born and raised Tal Altar decided to take time off from her physics studies at Ben Gurion University and experience working in a Jewish community in the diaspora. She had thought of going to an English-speaking country but after acceptance as an emissary Tal was chosen to go to Poland.

“I was delighted to have ended up in Warsaw as a community volunteer,” said Tal, whose intended one year period in Poland eventually extended to two and a half, during which time she also learned to speak Polish fluently.

“The Jewish community of Poland is intriguing – not even a series of books can describe it. The history of Polish Jewry is well known but the present is unknown and misunderstood, even ignored. The people you meet working there are amazing and each one of them has an incredible story connected to the past. These people have chosen to be Jewish and have set out to discover what that means,” said Tal, who mainly worked with students, pupils of a local Jewish school and preschool as well as with senior groups and community organizations in general.

Recently Tal led a group of young Polish adults on a Taglit-Birthright ten-day trip to Israel. Some of the group members had only discovered their Jewish connections a relatively short time before their first trip to the Jewish state.

“The Taglit-Birthright groups from Poland underwent a series of activities prior to their coming to Israel and continued with activities upon their return home. There is a great deal of interest amongst these young people with regard to Jewish history, culture and, of course, Israel,” explained Tal, who returned home recently and is now working with new immigrant students in her hometown of Beersheva.

One young lady in Tal’s group this summer discovered her Jewish roots less than 6 months prior to joining the Taglit-Birthright group.

Up until the death of her grandmother the young lady, who lived in a small place near Krakow, thought she was just another young Polish Christian. It was only at the reading of her grandmother’s will that the young student and her family discovered they were actually Jewish.

Her husband began to cry loudly and when asked if he had known and how he felt about his wife being Jewish, the family were further shocked when the anguished grandfather said, “For over 50 years we lived together and I never told her that I am Jewish – I was afraid to tell her, just as she must have been afraid to tell me,” the devastated man replied.

“This was how this young student, her mother, aunt and uncle – all in their 40s, and their own children all found out that they were Jewish,” said Tal, adding that every person she worked with had an emotional story.

Tal, who served in the Air Force, starting out as a physics, maths and English tutor at the Air Force Technical School in Haifa and also completing an officer’s course and finishing her service with the rank of first lieutenant, was exposed to the emotional stories of the local community almost upon arrival to take up her post in Warsaw.

A week after her arrival she had been invited to a synagogue for a wedding which, it had been explained to her, was not an everyday thing in Warsaw.

“I realized that I had been invited to participate in something special but had no idea just how special that was going to turn out to be,” explained Tal, who halfway through the ceremony understood that a 10 year-old boy and 6 year-old girl standing by the couple were their children. She was astonished to discover that the bride and groom had met during their high school days when both were members of the same skinhead group.

“The girl had become pregnant so they had married and later had another child. All the while they continued with their anti-Semitic views but some years later the woman had began to question on what these views were based and had visited a synagogue to find out why she hated Jews so much.

“Slowly she had been drawn to visiting the synagogue more and more, much to her husband’s horror, and it had become an issue that had led to many fights between them. However, one day during a visit to his parent’s home they were reminded that there would be a family occasion the following Friday and the young mother said she would not be able to attend as she would be going to the synagogue.

“A big fight had broken out between the couple in front of his parents and he had dragged his wife out of the house and to their home,” explains Tal.

“The following morning the young man’s father had phoned and demanded that his son come to see him immediately. Thinking he was to be admonished for his wife’s interest in Jews he once more began to apologize and the father had lost his temper and screamed at him he should come immediately, no excuses!”

Arriving at the parent’s home the young man had continued to make excuses, saying that he thought his wife had gone slightly mad and that he could not understand or even grasp why she was shaming him and the rest of the family.

His father had told him to sit down, called in his mother and announced, “Son, you have to understand something. I am Jewish and so is your mother, which means you are also Jewish.”

“Another amazing thing is that the young mother’s father had then also admitted to being Jewish and so his daughter had converted and there I was witnessing this young couple standing under a chuppa with this unbelievable story of what had led them to be there,” said Tal.

“They say that there are only two growing Jewish communities outside of Israel, the first is Germany and the second, Poland.

“In Germany the growth is due to immigration of Jews from the former Soviet Union. In Poland it is due to brave, confused people who have made a decision to find their way back to Judaism.

“Poland is an amazing place with some pretty amazing people,” concludes the young emissary with passion.