Story and photos by Marion Stone

Pushkar is a holy pilgrimage town sacred to Hindu people. Its holiness is derived from mythology about the Hindu God, Brahma, the creator god, who saw a demon trying to kill his two children, and was harassing people. Brahma killed the demon using a lotus flower as his weapon. Lotus petals fell to the ground at three places where springs emerged, creating three lakes. When Brahma came to earth, he named one of the three places where the lotus petals fell 'Pushkar'.

Today Pushkar has a prominent Temple in Brahma's name, and 52 bathing gatts – stairways leading down to the lake. The lake's water is believed to cleanse sins and cure skin diseases. During the annual Pushkar fair, famous for trading of camels, horses and other animals, crowds of pilgrims arrive as well as holy men. At sunrise and sunset, they descend a few steps into the lake and sacred bathing takes place. When dressed, the bathers go straight to their temple to continue their rituals.

This is where we were going to spend our first Shabbat in India. Early Friday afternoon, as we entered Pushkar, our bus stopped on the main road outside the Chabad House, and Rabbi Shimshon Goldstein came out to greet us.

The bus continued for a few hundred meters, passing a Sikh Temple, and dropped us off at a junction of narrow streets that it could not drive along. Our luggage would be brought to us and we had to walk through the narrow lanes to our hotel. As we walked past a shop selling clothes, pashminas and other textiles, a young man called out to us “Welcome - here is Rami Levy's Shop”! I really couldn't believe what I was hearing. How did he know that this group of westerners was Israeli?

We had been told that our hotel has remained rather old-fashioned, and we were asked to appreciate the history and bygone style associated with it, this being the best hotel in walking distance to Chabad House.

In fact, the hotel is a converted 400 year old former Maharaji’s Palace that retains its original style features. It stands by the holy lake of Pushkar. The rooms surround a central garden courtyard, and it is possible to go up to the roof for terrific views.

I seemed to hit luck with the room I was given. A corner room, it had two windows – one leading to a small balcony that overlooked the holy lake, and the other also overlooked the lake, but from a different angle. A beautiful solid rosewood cupboard stood in the room, and when I opened the door I was hit by a strong whiff of moth balls. There was no hanging space in the cupboard, but I couldn't have put anything there anyway because of the horrible smell. The electrical fittings must have been at least 100 years old. The bathroom was modern and so was the hospitality tray. The entrance door seemed to be original with a metal sliding lock and I had to lock or unlock it with a padlock in order to get in or out. It truly was a room of character and history. 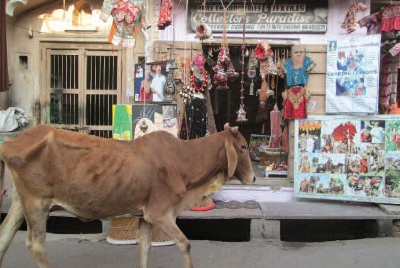 Window shopping in the bazaar ... a holy Indian cow in Pushkar

There was time to walk around so I found my way to the lakeside and some shops. Signs at the lake ask people to show respect and not to photograph (the bathers), but since no-one was bathing, I still hadn't grasped what that meant. Also, I came across several signs in Hebrew! It seems that many Israeli backpackers come to Pushkar, and falafel was being advertised as well as postal and delivery services.

The group met at 5pm to walk to Chabad House to be in time to light the Shabbat candles. After candle lighting, Mincha and Maariv were recited, with some hearty singing and handclapping during Kabbalat Shabbat. I wondered what the passers-by made of these foreign sounding songs and sounds.

We then stepped up a floor to where long tables were set for dinner. There was room for at least 150 to 200 diners, though around 120 were present that night. The other guests were mostly young people, probably backpackers, several Israelis, but also speakers of other languages. Here I was once again, a long way from home, witnessing the coming together of a diverse assortment of Jewish people who wanted to spend a traditional Friday night among their own people.

Only this time there was a difference. The whole city is vegetarian - no meat allowed anywhere. I was curious to know what would be on our Shabbat menu instead of the Shabbat chicken that we are used to. And the burning question – would we be hungry?

As we became involved in the rituals of Kiddush, blessing the wine, washing hands and eating challah, I tried not to lose track of the fact that here we all were in an isolated town in north western India, following our long-time traditions of our ancient religion, while a totally different ancient religious lifestyle was going on outside.

How does Chabad do it? Far away from Jewish civilization we lacked nothing. There was plenty of food, nicely served, all delicious. Starting with a great choice of salads, there was beetroot, coleslaw, two types of aubergine, and mixed vegetable salad. The tuna patties were a treat. Then we had plain rice, green beans with sesame, and a kind of potato stuffed verenikes in a mushroom sauce. Afterwards we were offered homemade spicy biscuits and both apple and chocolate cake, all superb in texture and taste.

At the end of a pleasant relaxing Shabbat meal we said the Grace After Meals and walked back to the hotel.

I slept well, but awoke at 6am to the sound of a telephone. 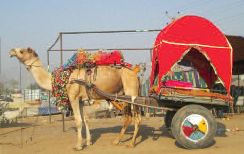 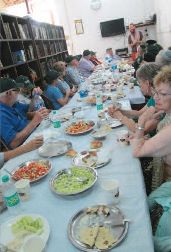 From Top Left: A Pushkar woman carrying vegetables on her head.  At the Pushkar camel festival.  Entrance to a Hindu temple and Lunch at Chabad in Pushkar.

As I became more conscious, I could hear high-pitched voices of women outside, and the ringing of a bell every so often. By 6.30 I was out on the balcony listening and watching what was happening around the lake. To my right was the huge white building that was the Brahma Temple, and men and women were stepping down into the water and washing themselves. Some individuals and small groups of women were doing the same below my window. Now I understood why there are signs prohibiting photography.

My mind wandered way back into history to a time when Jews would immerse themselves in a mikveh before making their way to our first and second Temples in Jerusalem during our pilgrim festivals.

Devout Hindus are said to bathe twice a day - at daybreak and sundown, and it is a mitzvah to bathe in this holy lake at Pushkar. During the annual Pushkar festival, which was taking place at this time, groups of pilgrims and holy men and women arrive in Pushkar, walk in procession through the town streets to the lake where they bathe and then go immediately to the Temple to pray. I witnessed three of these processions during the day. The grandest was headed by trumpeters and other musicians wearing formal uniforms. Then came the Guru, accompanied by holy men holding trays of offerings, and behind them walked many women in colorful sarees, and behind them two camels decorated for the festival.

We returned to Chabad House in time for coffee and cake and the morning prayers, and after the service, there was Kiddush, and lunch was served, starting again with salads. I heard that in Pushkar they bake their own bread and challah, and also make their own cheese. Our main course was the best vegetarian cholent I have ever eaten. The dessert this time was a refreshing fruit salad.

After Birkat Hamazon (Grace after Meals) we were taken for a walk, and on the way met some Israelis some monkeys, and we also saw cacti and Tamarind trees growing wild.

I was back at the hotel when the sun started to set. I could hear loud music and people singing, and once again people were bathing in the lake. It was so beautiful to watch the colors change as the sun set. At this time the group was back at Chabad House for Mincha, Maariv and Havdala.

At 7.30pm we all went up to the hotel's roof to watch a performance of Indian gypsy dancing with musicians. They seemed to be a family of performers and brought their small children with them. It was a very colorful performance and one of the men demonstrated his fire-eating skills.

By 9pm we were back at Chabad for supper. What a sight met our eyes! A huge bowl of chips, another of shakshuka, a dish of falafel, and of course, salad. Served with a small round bread roll, I took the opportunity to fill my roll with chips, and voila! Here I was in Pushkar eating a Yorkshire style chip butty. It was really a home-from-home feeling so far away from home. We were accompanied by two skilled drummers, the Rabbi and guests spoke to us, and thus ended a surreal day of contrasting, yet in a way, similar customs.

Timing of our tour of India coincided with the Hindu Diwali festival, which celebrates the victory of good over evil. It is known as the Festival of Lights because one of the festival customs is to decorate with lights both indoors and outside in the street. The older way of lighting oil in small pottery containers could be seen everywhere. It also seems to mark the sugar cane harvest. Indeed, there were colored lights decorating shops and houses by the roadsides, as well as streamers of fresh yellow and gold flowers everywhere. Sellers of flowers, ceramics, huge household pots and pans and clothing were to be seen everywhere ahead of the festival. Once the festival began, so did the fireworks. Sugar cane was everywhere, and was even used to decorate vehicles as a good luck omen.

Marion Stone travelled with India KosherTravel, www.indiakoshertravel.com. The itinerary covered Udaipur, Jodhpur, Pushkar and Jaipur, all in Rajastan, and then Agra for the Taj Mahal, Old and New Delhi, Cochin and Mumbai.

In Pursuit of the Trivial
From Bible to Bedouins and Battles