Plato once said, “Music gives a soul to the universe, wings to the mind, flight to the imagination, and life to everything.” This idea is expressed in A Late Quartet, Israeli filmmaker Yaron Zilberman’s second film after his award-winning 2004 documentary Watermarks. Although the film (written by Zilberman and Seth Grossman) did not garner enough accolades – including being snubbed for Oscar nominations – it is nonetheless a gem.

The exposition introduces us to the camaraderie, creativity and tribulations of a classical string quartet. As Juilliard graduates, The Fugue live in Manhattan and has had a successful career playing together for 25 years. Close-ups reveal violinist Daniel Lerner’s (Russian actor Mark Ivanir) handwritten, scrawled notes on Beethoven’s sheet music. We wonder which is more primary and integral for the piece: pristineness or collaboration. This idea is challenged by violinist Robert Gelbart (played strikingly by Philip Seymour Hoffman) who says, “Playing without these endless markings would be exciting and a worthwhile risk”. Cellist Peter Mitchell (played effortlessly as usual by Christopher Walken) agrees. However, Daniel retorts: “A risk? We’re in the casino business now?” Robert’s wife, Juliette (cleverly played by Catherine Keener), is a viola player who shares Daniel’s more conservative view. Nonetheless, when they play together, it is exquisite: Robert adds color and texture to Daniel’s precise playing; Peter leads as the most veteran musician; and Juliette adds a unique depth of sound.

In an early scene, Peter explains to his students the genius of Beethoven in having composed seven interrelated movements for one of his late quartets at a time when only four were the standard. Peter’s love for music complements his effective communicative and teaching skills. Sadly, we learn that Peter has developed Parkinson’s disease and must cope with his new handicap which cruelly impedes his playing. Nonetheless, he retains a “quality above all” (verbatim) attitude and decides that it’s best for The Fugue to find a replacement for him. This news affects each musician personally and, as a result, we glimpse inside their minds.

We learn, for instance, that Robert had never wanted to be second violinist, but agreed for the sake of their superb harmonies and to maintain the quartet’s overall excellence. Daniel is so dedicated to his craft that he makes Alexandra (Robert and Juliette’s daughter) read several books about Beethoven in order to prepare and attempt to play the Opus 131. Robert is more congenial and tells her that just days before Schubert’s death, the composer’s last request was to have Beethoven’s Opus performed for him. Robert shows respect for Daniel’s unusually high demands, derived from deep passion by revealing that before performing that particular piece, he imagines The Fugue surrounding Schubert on his deathbed. Nonetheless, Robert harbors resentment towards Daniel as the soloist of the group, "whose playing", he says, is too “rigid, monotonous and safe, and sucks the life right out of it.”

As the more loving and sympathetic member, Juliette implores the other musicians to give Peter time to adjust to his difficult situation. She is hopeful that Peter will not only be well enough to play a farewell concert in his honor (upon his request), but also to finish the quartet’s concert season. Daniel, on the other hand, cannot quite understand the individuality each musician brings, and thinks that replacing Peter with another competent cellist will hardly alter the group’s sound or affect its performance. In any event, Juliette has so much love for the seasoned quartet (and for Peter) that she is unsure about continuing at all.

To put things in better perspective, fellow pianist and friend, Gideon Rosen, (played by the well-known actor Wallace Shawn) admits to Peter that he loves being middle-aged because he doesn’t have to prove himself anymore as a musician. Gideon can simply have fun and perform music, and he begs Peter not to retire. Of course, his interests are not entirely objective; Nina is his sought-after cellist whom The Fugue wants to employ, which causes a slight rift. Later on, at a Parkinson’s group therapy session, Peter shows exasperation but deals with his situation in the interest of the quartet’s future. 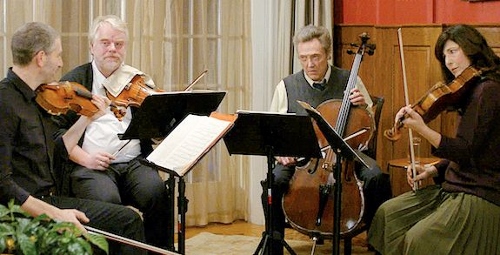 Making sweet music: a scene from A Late Quartet, directed by Israeli Yaron

In a more poignant scene, a documentary is made about The Fugue (a film-within-a-film) and we get to learn about the group’s inception. Robert says, “From the first note, I got it. I understood this: the dynamic of a quartet and how special that was to be part of a group [which] is about becoming one”.  He then describes his first encounter with Juliette: “There was this incredibly beautiful woman across from me playing the viola like her life depended upon it. She was breathtaking: star-crossed, you know.” However, their relationship (like many) is complex. Afterwards, Juliette urges Robert to drop the idea of alternating first violin with Daniel because “it puts the quartet in danger,” and he is “the best second violinist out there.” As a result, Robert is deeply insulted and, in turn, he winds up hurting his wife.

Finally, we understand that forming the ideal quartet requires great devotion and sacrifice. The young Alexandra reveals that she had always felt second to her parents’ fiddle, especially as they toured for seven months at a time. Juliette explains to her, “This is a musician’s life; we rehearse, and we practice, and we perform.” Peter is willing to accept his self-imposed loneliness, but Daniel has second thoughts. No matter, he explains that the greatest composers who dig deep into their souls always used this form, always, always the quartet.” We hope that they will continue to work on the group’s dynamics, and remain the ideal quartet.

Michael Lipiner is a doctoral student in film studies at The Hebrew University in Jerusalem, and teaches cinema and English Language Arts. He is a native New Yorker, pub...
More...