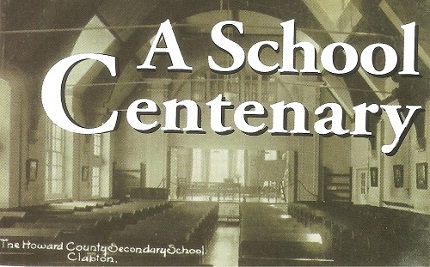 It was a great surprise for me to learn that there was to be a centenary celebration in my old school. I had no idea that the John Howard School for Girls of Laura Place, Clapton, was 100 years old! And by coincidence it turned out that the celebration was to be held a day after my arrival in London.

I have been in contact with five of my classmates during my visits to London over the years and now we were all to meet up again at the school on September 28, 2006.

I didn't know what to expect and I was curious to recover some of my past years.

At the end of World War II and aftermath there was a large thriving vibrant Jewish community in north and east London and the schools in the area were of a high standard of education with dedicated teachers and great achievements.

I began to study in Laura Place in 1945 after five years of evacuation in the country. My mother had had the foresight to bring me back to London during the blitz to sit for the LCC scholarship exam and thus I had a place in a grammar school at the end of the war.

I was proud to join this school and wear the brown uniform with badge and blazers edged  in the color of the 'house' to which I belonged. We were encouraged to wear school uniform even after school hours, but in my case after 1948 the brown uniform of the day, in the evenings, changed to the blue shirt of the Zionist youth movement. To school I would daily ride my bicycle up past Hackney Downs, across Clapton High Road into Laura Place.

Returning after so many years, as I entered those 'hallowed portals' of the school doors, they seemed to be so much smaller than I had imagined in my memory. In the corridors of our time, it was single file along the right, no speaking after the third bell, and the great polished oak staircase which only teachers and prefects were allowed to use, appeared to me now to have lost all it significance. 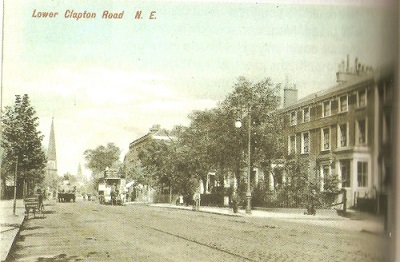 In the assembly hall, it was somewhat disappointing to see that the wall paneling had been removed and the now non-existent stage was divided off for other activities.

The Jewish community of the area had long ago moved on and the pupils of Laura Place are now of multi-cultural backgrounds, residents of the surrounding area of Clapton. With progress in technology, here too this subject is of much importance in the present school curriculum; in fact, the name of the school has been changed to Clapton Girls' Technology College.

I could not immediately see the present school uniform as the first pupil I met was swathed in black with the headscarf of Islam, but mostly it was black and white with purple sweater.

We were taken on a tour by teachers and staff to classes in enlarged additional buildings and finally we joined the 'old girls' in a very large hall.

There were about 200 'old girls' between the ages of 60 and 80 years old attending this celebration. With our name tags attached and before the ceremony began, there was a hustle and bustle of pleasure in recognizing old faces and sharing photographs of those special years of our youth.

The program included an introductory welcome by the deputy head teacher, a lecture on the centenary successes of the school over the years by the head teacher and memories of the years 1930, 1940 and 1970 recounted to us by former students, which were mostly very amusing. The school song was sung and as my neighbor pointed out, instead of Bach and Purcell, music of our time, we heard the Steel Pans Band and rock music.

Finally, there were light refreshments in another hall with pupils' displays on the walls and there we had the opportunity to have fun together, reminiscing and remembering ourselves as the students of yesteryear.

I would not have missed this opportunity of going back to my school, but it was once in a lifetime and no more.