On the 5th Iyar 1948, as the UN vote for the establishment of the State of Israel was passed, Lucien Harris proudly raised the Israel flag atop the Jewish Agency building at 77 Great Russell Street, London. His son, David Zohar, 7-years-old at the time, recalls:

“Everyone was singing Hatikva in the rain, and someone opened a bottle of wine for the Shecheyanu blessing. All the grown-ups around me were crying with joy.”

The Harris family sold their Golder's Green house and arrived in Israel wearing warm winter clothes in October that year, to a hamsin wind and temperature of 36 degrees centigrade.

Tamar is a graduate of the Bezalel Academy of Arts and Design in Industrial Design and while she was studying for her Master's degree at Eindhoven Academy in Holland, she won the UNESCO Grand prize for her game, Master Peace for Dialogue.  As we well know, current conflict resolution most often place protagonists in a win-lose situation. Tamar's game is based on collaborative face-to-face interaction for participants in order to jointly create a new narrative. This is a useful tool for intercultural dialogue and an important precursor for more successful conflict resolution.

Tamar's art is rooted in her surroundings. Whenever I walk along the Jerusalem Light Rail Park track, I make sure to visit Tamar's “Green Seat” sculpture in the community garden of Ma'agalei Yavne Street in Katamon. 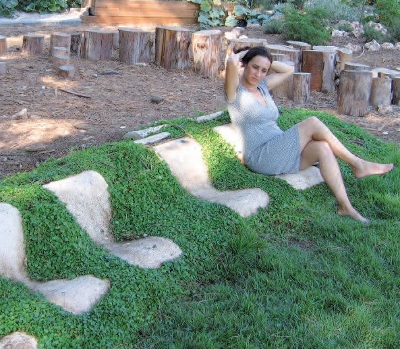 Tamar (above) with her ‘Green Seat’ sculpture in the community garden of Ma’agalei Yavne Street, Katamon Her ‘Cool Seat’ (above) recently won a commendation in a contest held in South Korea

One Friday evening we saw young mothers with their children enjoying a relaxing moment on the bench which was constructed with the local residents and integrated into the surrounding vegetation. Tamar's “Cool Seat”, based on the Arab ceramic water jug that cools by slow evaporation of water through its pores, recently won a commendation in a South Korean biannual competition.

Ruth Rabb
2014-02-11
My comments are that it is a privilege to know someone who has so much talent and to think I met her many years ago in Nairobi Kenya and of course one knew that she was a talented artist! I wonder if she remembers her time here?

Connecting with your Kibbutz volunteer friends
Farewell, My Lovely
Now we’re making the headlines . . .
Art from the Heart
Jewish Art Returns to Jerusalem