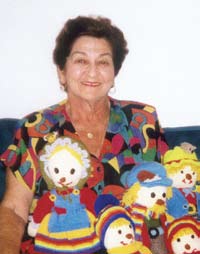 In the early 90’s Shulamit Lamie Ravinsky (nee Poliak) discovered the joys of knitting dolls. Here she is in her apartment in Ramat Aviv surrounded by these elaborate, colorful, lively and impeccably knitted dolls which are an example of her perfectionism and sense of light-hearted fun. They proudly filled two cabinets in her living room and gave everyone who saw them, much joy.

Shulamit was born in Mazeikiai, Lithuania, in 1925 and two years later, together with her Mom and brother, Archie, she found herself bound for South Africa. A passionate Zionist from a young age, in 1969, as a young widow, she realized her dream and immigrated to her beloved Israel with her two sons. After ulpan Shulamit was hired by Bank Leumi as an English language correspondent where she worked until well after she reached pension age. She took immense pride in her work and was quickly revered for her sense of integrity, honesty and impeccable work ethics, always willing to go the extra mile for the job and with one of her big bright eyed smiles. All that coupled with her strong sense of aesthetics, her rich and elegant dress code made her an admired asset.

Her meals and feasts which included wonderful traditional Yiddishe dishes learned from her Mom were amongst her many attributes and were 'hummed and ahhed' about far and wide. She also knitted, crocheted or sewed, making herself and her sons clothes and later scarves, balaclavas and socks for the soldiers when her son was in the army in the 1970's.

Shulamit played bridge, loved classical music and had a 35 year subscription to the Israeli Philharmonic orchestra. She took courses in music appreciation and in English literature which was a passion of hers. An avid sports fan she played lawn bowls and always followed the TV sports channels watching snooker, golf, tennis.

She is sorely missed by her sons who loved her deeply: “Mom was always there for us – a pillar of support and wise advice”.