Graves of Rabbi Meir of Rothenburg – the Maharam – and Alexander Ben Salomo Wimpfen, who paid a large sum to redeem the rabbi’s body, on condition that he was buried next to him

My husband and I recently took a trip to the ‘ShUM’ cities of Germany. No, the ShUM cities are not associated with garlic, as you might think, but instead are living treasure houses of Jewish medieval history.

ShUM is an acronym of the first letters of the medieval Hebrew names for Shpira (today Speyer), Warmaisa (Worms), and Magenza (Mainz), which are located along the Rhine River, not far from Frankfurt. Here, from the 10th century, Jews lived a vital and thriving communal life, led by some of the most famous rabbis of history, including Rashi. Their scholarship had a profound effect on the culture, songs, rituals, and traditions of Ashkenazi Jews all through the Diaspora and is still felt today.

As Rabbi Isaak Ben Moses wrote around 1250, “How very much do our teachers in Mainz, in Worms and in Speyer belong to the most learned of the scholars… and from there the teachings go out to all of Israel…All the communities respect and follow them, on the Rhine and in all the land of Ashkenaz.”

Even today, some 1,000 years later, much can be seen of that history, including the remains of synagogues, gravestones, and many artifacts which are preserved in the museums of Speyer and the graveyards of Worms and Mainz.

We started our trip with a visit to Speyer, which has an excellent historical museum. Jews were first allowed in Speyer by charter in 1084 and built their synagogue on Judengasse (Jews’ Street), which has been renamed, but still exists.  In the museum, we saw gravestones from the former Jewish cemetery which had been dragged away and used in construction, but were then returned to the community. One of them was of the scholar Baruch ben Elieser, who died in 1365, with the inscription still clear. Also in the museum are buried treasures—coins, silver vessels and jewelry—which had been hidden by their Jewish owners to protect their property prior to the pogroms at the time of the plague.

Behind the museum are the remains of the synagogue, built in 1104. Models and drawings allowed us to see what the synagogue looked like. I was interested to see that gender equality was not in evidence in medieval synagogues; women did not sit behind a mehitza, but in a separate building altogether, located next to the synagogue, with only a few holes in the wall to allow them to hear the prayers.

The Speyer mikvah, next to the synagogue, is the oldest preserved mikvah in Europe.

A figure on Worms Cathedral which represents the Jewish religion

We next visited Mainz, the largest city of the three. At the time of flowering of the Jewish community, it was one of the most important centers in the Holy Roman Empire, and today, it’s a thriving, modern city. We had arranged for a guide—a young man who is not Jewish, but who has written his PhD thesis on the Jewish graveyard, which is some 1,000 years old. It is truly remarkable. Many headstones had been taken away and used in construction, but over 200 have been salvaged and returned. We saw, among others, a copy of the gravestone of Yehudah ben Senior, dating from 1049 (the original is in the State Museum in the city)—the oldest Jewish gravestone in Europe. Also buried here are the scholars Gershom Ben Judah and Meshullam ben Kalonymus (‘the Great’ or ‘the Roman’). Many visitors leave pieces of paper on top of the graves, bearing their wishes for prosperity, health, and so on. There are hundreds of these notes, reminiscent of the notes in the Western Wall.

Another guide who was a volunteer, Rosemary Spars, then took us to the new (2010) modern synagogue and community center in Mainz, designed in the Liebskind style, which was funded by the government and is architecturally full of symbolism, such as a sculptural translation of the word “kedusha” and a roof which is meant to invoke the shofar. It is striking, but I must admit I didn’t find the design sympathetic.

Not medieval, but modern Jewish influence can be seen in the stained-glass windows designed by Marc Chagall in 1973 for St Stephen’s Church, built in 990, in Mainz. Chagall had said that he would never work in Germany again after the Holocaust, but he changed his mind when he learned that the rector of the church, who had a Jewish father, had also been persecuted during the war.

Worms was just 20 minutes by high-speed train from Mainz.

This city also has an ancient Jewish cemetery, which is still largely intact. It contains some 2,500 gravestones from the 11th to the 20th centuries. The oldest dates from 1076. Here we saw the graves of Rabbi Meir of Rothenburg, the Maharam, whose saintly character can be deduced from the fact that he had been taken prisoner by King Rudolph of Hapsburg who demanded a ransom from the Jewish community. Rabbi Meir refused to be ransomed, claiming that the money could be used for better purposes. He died in prison. A merchant paid to have his body released, on condition that he himself be buried next to the rabbi. And so he was; the two graves can be seen today, side by side. 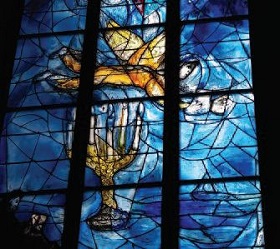 The status of Jews among Christians in medieval times can be seen from a figure carved into a door of the Worms Cathedral—the synagogue personified as a broken woman with blindfolded eyes. That symbolized the blindness of Jews who were unable to recognize Christ as the Messiah.

We got an impression of the Jewish area in medieval times by walking down the Judengasse, the main street of the Jewish quarter, in which the rebuilt structures still retain the proportions of the medieval buildings. The synagogue is located here, first built in 1034 and rebuilt many times until it was burned down in 1938. It has been rebuilt as a copy. Also in this area is Rashi House, built in the 1980s on the site of the dance hall, which was a site for marriages, a school, and a home for the elderly. Today, it houses a museum with artifacts and documents illustrating the development of the Jewish community.

After three days in the ShUM cities, I felt that I knew a little more what it was like to live as a Jew in medieval Germany, or Ashkenaz.  On the one hand, their life, when things went well, was full and rich. Their community boasted the greatest Jewish scholars of the time.

On the other hand, the history of the ShUM cities was not an easy one. The Crusades wiped out much of the community and the pogroms at the time of the Black Death, in 1349, for which the Jews were blamed, destroyed the community again. Rebuilt, the cities struggled on in the face of mistreatment and discrimination—and then came Kristalnacht and the Shoah. That was pretty much the end.

Today, there are only a few thousand Jews in Worms, Speyer and Mainz, many from the former Soviet Union. But the historical record remains.