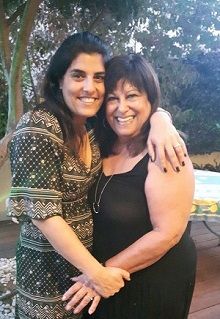 It was a Friday afternoon when my daughter and her family came down from their Kibbutz - Beit Alpha - to Raanana to spend Shabbat. We were sitting in the kitchen when suddenly she said: “Mum, I need to tell you something.”  All kinds of thoughts raced through my mind in those seconds, “What is it?’ I asked anxiously.

Keren replied: “I really want to be pregnant again, but I feel I have my three beautiful children and that completes my family. SO, I have decided that I will help someone else have a baby. “

I was in shock! What was she saying? I couldn’t grasp the sense of what she was actually telling me. Then it clicked – she wanted to be a surrogate mother.

I was very apprehensive at first. Keren Mohnblatt Nahum, my beautiful thirty-eight year old daughter, wife and mother of two girls and a boy, was about to undergo a huge life-changing experience.  Did she really know what she was taking on? A pregnancy? A labor? How she was going to be able to give away a baby that she had carried for nine months? How was Shahar – her husband of fifteen years - going to feel? How were Lior (10) Shira (7) and Shani (5) going to react? They were going to see their mother’s tummy getting bigger and bigger, and then in the end she was going to come home without a baby.

I should have realized, and later did, that Keren, who is such an incredible woman, knew exactly what she had to do and say to get her family on board, including me! She explained every single detail of what lay ahead and in the end – not without some apprehension - we were able to understand her decision.

It turned out that her sister-in-law’s friends Liko and Avi Hafner Sela who live in a neighboring kibbutz could not have a child. Liko has a disease called Endometriosis. This disease causes the layer of tissue that normally covers the inside of the uterus to grow outside of it. Apparently, one in ten girls suffer from this and don’t even know that they have it. Liko had undergone surgery several times but finally was told that she would never be able to conceive.

Liko and Avi dreamed of having a family and they opted to follow the path of surrogacy.
When Keren heard about it, she immediately made her decision – “I’ll have their baby for them.”

So this was how this really noble, beautiful, heart-warming story began.

Legal proceedings here in Israel took several months. Finally, Keren was allowed to be impregnated with a donor egg which had been fertilized by Avi’s sperm. Thus, there was no actual biological connection with Keren – she was “simply” the oven for forty weeks!

Keren underwent a very difficult labor, but my brave daughter went through it all like a trooper. I was there the whole time – it was so hard for me to see her in pain but after eighteen hours, Liko and Aviv were blessed with a beautiful son.  The first thing Keren said to them was “Take your baby – you are a family now.”

Everyone was in tears – tears of joy (including the nurses) of Poriyah Hospital in Tiberias.

Another remarkable side to this story is that when Liko and Avi returned to their home on the kibbutz, new mothers who had recently given birth supplied them with mother’s milk for the first six months of Mai’s life. What amazing people there are in the world!

I could not feel more proud and in awe of my daughter. She is an amazing woman, who feels so strongly about helping people.

Recently Liko and Avi have had another baby boy by another friend, who also volunteered to be a surrogate.

A dream come true …. and hopefully an example to others.