I was surprised when years ago I passed my first Rosh Hashanah in Haifa to find that my new synagogue at the top of the Carmel observed a “long-distance Tashlich ceremony.”  We would gather on the synagogue patio and face towards Haifa Bay, kilometers away.

It made me nostalgic for all the Tashlich ceremonies of my American synagogue experience, wherein we actually went down to a body of water and “cast our sins into the depths” in the form of breadcrumbs.

I especially remembered a Tashlich ceremony from my childhood in Philadelphia.

I grew up in a new, post-World War II neighborhood.  It consisted of a large grid of row houses.  On the periphery was some undeveloped forestland complete with a creek running through it.  We kids called it “the woods.”

The synagogue itself was freshly organized in this new neighborhood of mostly Jews.  The adults, like my parents, were the first American-born generation of East European immigrants.

Some considered themselves “Orthodox,” but would not pass “Orthodox” muster by today’s standards.  The basically non-observant claimed to be “Reform.”  The synagogue was chartered as “Conservative,” a compromise.  Since the “Orthodox” were the ones who actually came to daily, Sabbath and holiday services year-round they got to set the tone of the synagogue.  But, many of them were Jewishly “learned” only relative to those who were abjectly ignorant.

Among the “learned” was a man who wore his Jewish “knowledge” on his sleeve.  He carried himself in an extremely haughty manner and saw himself as an amateur “halachic decider.”  His arrogant manner and stiff-necked demeanor earned him the sobriquet “the Pope.”

On Rosh Hashanah we would go down as a group to “the woods” to stand by the creek for Tashlich.  Adult males and young boys alike were dressed in suits and shirts and ties, our holiday finery.

In order to reach a large open space where we could stand as a group we had to cross over the creek on a natural bridge of big boulders.

On this particular Rosh Hashanah, after most of us had crossed one-by–one over the boulders, which were damp and covered with moss and algae, it was the turn of “the Pope” to cross.

He stepped on the rocks with his usual stiff, ultra-dignified posture.

But, as he stepped forward he was paying more attention to heaven than to the slippery boulders underfoot.  Two paces forward and he slipped sideways into the flowing water.

Watching him sitting there in the creek in his suit, I believed for the first time in my young life in Divine Reward and Punishment.

Tashlich that year was real.

Tashlich (Hebrew word meaning cast) refers to a prayer ceremony recited during the days of awe (the days between Rosh Hashanah and Yom Kippur) recited alongside a body of running water. It symbolizes one's casting away their previous years’ sins. 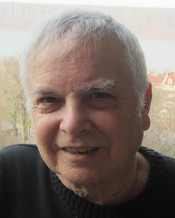 Born in Philadelphia, J. Leonard Romm is a retired rabbi from Long Island, New York. He is the author of The Swastika on the Synagogue Door, a novel for young adults, and has written numerous stori...
More...