THE AGONY AND ECSTASY OF TEACHING ENGLISH IN ISRAEL 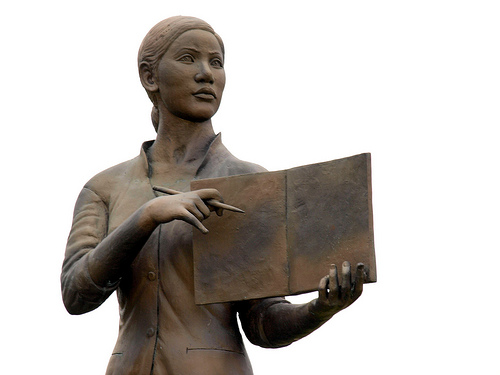 After volunteering as an English teacher in various schools for several months, I was hired by two schools – one in the gifted Arab sector and the other a new Druze middle school. The staff and children were welcoming to the point that I felt like a rock star most days.

Teaching English to such eager students surrounded by supportive staff should be pure joy. Unfortunately, month after month there was no sign of pay – instead, the schools and the Ministry of Education (MOE) threw more and more random paperwork at me while I was patronizingly told to be patient. It was not until I started a mandatory 6-month college course about teaching English in Israel, where I met fellow Anglo and Russian teachers that I realized we were all in the same sinking boat with no life jackets or preservers.

One highly qualified and dedicated teacher’s creative response, after six months and no pay, was to politely tell the principal that he was leaving his teaching post until he was paid. The principal, surprisingly, supported this move and even helped write the necessary Hebrew paperwork to the Ministry’s treasurer and the school inspector (apparently the telephone is never answered in the treasury department, so a call is not an option). The teacher also requested that on his return he be allowed to negotiate his salary and not be ‘assigned’ the standard unlivable, low monthly pay. He was called back to work the next day and paid his first six-month salary immediately.

Frustrating beyond belief is there are no salary negotiations and, even though we must join the union (staffed by Hebrew speakers who usually speak little or no English), it provides no salary protection at all. If you try to resign in discontent, the school principal may fiercely contest your resignation and you may be told that there is a binding contract, even if you have not been paid one shekel in many months and no contract has ever been negotiated.  I am amazed because I have only experienced a similar level of chaos in third world countries limping along on non-existent economies.

Schools and the MOE blame each other for this state of affairs. If you are dedicated to teaching in Israel, be aware that there are serious pitfalls built into the system that you need to navigate, on your own, in Hebrew, and even doing that, you may simply not be paid for work performed.

To date, I have received correctly adjusted pay in the Arab sector, but the Druze sector “ran out of Council funding” so, although the MOE (reluctantly and rudely) paid its half of my matching salary, the Druze school will not pay me despite an excellent job performance, confirmed by the principal, students, and fellow teachers alike. The inspector supports this decision: an excellent teacher will simply not be paid. Game Over. Go Home. Shut Up.

I am not sure how long my fellow teachers will fight the system, but I have recently made the decision to keep my sanity and dignity by only teaching at the Arab gifted school where I was warmly welcomed and eventually paid. I have stopped volunteering as it is too easy for both the schools and the MOE to gang up later and claim that you were never hired, but volunteered all along. To supplement my income, I tutor individuals at the going rate of NIS 100 for 45 minutes.

A fellow teacher-anthropologist, also trying to survive and give back to Israel through teaching English, recently gave me a book to read - The Bookseller of Kabul by Asne Seierstad - because there is a chapter at the end about education in Afghanistan. The chapter describes a nightmarish Ministry of Education with problems mirroring those in Israel.

How, and more importantly why, is it possible for Israel to mimic a devastatingly poor, war ravaged, and exceptionally troubled country’s failing education system?

Sharleen Harty is a new immigrant from California via South Africa originally based in Akko for the first year and now living in Nahariya. Please email sharpersona@aol.com if you have teaching success stories, nightmares or tips to share with other long suffering Anglo teachers (apparently this problem is decades old).