In 1985, after close to 100 harvests and four generations, Jonathan Tishbi became the first grape grower from the Carmel collective to break off and start his own winery. Without much experience in  making fine wines, the Tishbis would hire several winemakers including such recognizable names as Yair Margalit, their founding winemaker and the founder of Israel’s first boutique winery, the Margalit Winery in 1989, Assaf Paz (also of Carmel, Binyamina, Vitken and lately Segal), Paul Dubb of Tzuba, Arieh Nesher of Tabor and Lewis Pasco (founding winemaker at Recanati, consultant at Hebron Heights and Beit El winery, and most recently his own Lewis Pasco Project) before Jonathan’s son Golan grew into the role in 2001.

Since then the Tishbi Winery has become the largest family-owned and operated winery in Israel, making about one million bottles each year (the family-owned Teperberg Winery is larger but the winemaker isn’t a family member). Like most wineries their size or larger (they are the seventh largest winery in Israel), they have a few series of wines to suit different budgets and expectations.

Located along route 652 in Binyamina, with a visitors' center open for breakfast, lunch, wine and chocolate tastings and tours, the Tishbi Winery arguably hosts one of the most hospitable stops in one of Israel’s most concentrated regions of wineries, just south of Zichron Yaacov where the Tishbis live and also run a popular cafe that is open all day and into the night (except during the Sabbath and holidays, since the wine, the visitor center and cafe all are kosher).

Tishbi Winery is a frequent participant at Israeli wine festivals where their booth is one of the most popular because, besides their wines, they often bring French Valrhona chocolates (they’re the importers and distributors) and their delectable wine jellies with flavors like Cabernet Fig, Cherry Shiraz, Mango Chardonnay, Passion Fruit Champagne, and my personal favorite - Cabernet with Caramelized Onions. They typically bring their best wines to festivals from the Special Reserve series (only made a few times a decade), their Single Vineyard series (where their best grapes are featured only from harvests when certain grapes really shine) and their mainstay Estate series (popular in better restaurants and shops).

Yet, their most familiar wines are the value-driven entry level Vineyard series which can often be found in markets or available by the glass on wine lists. Frequently, Golan is front and center at festivals and manning the booth because at Tishbi no job is too big or too small for any family member, and they take pride in the fact that everyone wears a lot of hats at the winery and there’s a good chance that if you’re there, you’ll see this family credo in play.

Jonathan is still quite active at the winery as its CEO although Golan is taking on more and more responsibilities. However, being CEO doesn’t stop Jonathan from hopping on a forklift when needed, and he and Golan often ride bicycles around the expansive winery grounds to save time, which is key, since they operate with a much smaller office staff than many wineries the same size and since many roles are filled by family members. Jonathan’s wife and the family matriarch, Nilli, oversee the visitors' center, brother Chaim can be found keeping busy in the warehouse, their Fine Foods line, including Extra Virgin Olive Oils and Wine Jellies, was launched by Golan’s sister Oshra, and even the daughters-in-law have found interesting ways to contribute, besides parenting the next generations of Tishbis who are often seen with their grandparents, which lends a very family-friendly atmosphere at the winery.

Recent changes at the winery showcase express Golan’s determination that the winery be not only a stop for those who love wine but also an evolving culinary center for its region and for the country. Besides having probably the best menu of any visitors'- center restaurant (thanks to Austrian Chef Gunther Biedermann), the winery is launching its own bakery, using Panyol pastry ovens from France. They’ve been making their own fresh breads for visitors for years, but now they’re also selling freshly-baked breads to take home. They’re even selling and importing different sized ovens from Panyol for restaurants and for residential back yards. 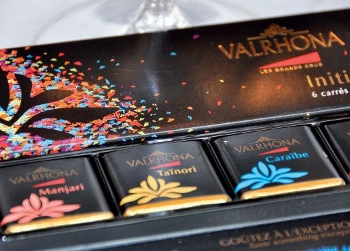 On a similar note, the winery just started importing Old Hickory Bar B-Q slow roasting ovens from Missouri, and on Fridays, in just a few months, it’s become a popular stop for meat-lovers. Since the visitors' center is kosher and dairy (featuring pastas, pizzas, fish and breakfast selections), Bar B-Q meat is served in the back lot, informally outside, and only on Fridays from 10am until 3pm. For a first try, a pita with 100 grams of BBQ beef is NIS 25 and comes with a “bottomless glass” of their house red (a Cab Syrah blend) which they also sell for NIS 19/liter when you bring your own bottles to refill (and any clean bottles will do...milk, vodka, syrup ... anything with a measurement on it so they know what to charge) and NIS 40 for olive oil which they refill on the same premise. The Bar B-Q is NIS 180 per kilo for beef and NIS 70 for a whole chicken cooked over peach wood, and it’s worth every shekel.

For those with a sweet tooth, as dessert or on their own, the aforementioned French Valrhona chocolates are available to taste for only NIS 30 as part of a six-part wine and chocolate pairing designed by one of Valrhona’s own experts. Traditionally, conventional wisdom rallies against the chocolates' overpowering flavors from being paired with dry wines and being coupled with sweeter dessert wines, yet Golan insists that finer, subtler, more nuanced chocolates can marry well with chocolates. I’ve tried the pairing myself and have since questioned the black or white conventional taboo of crossing the two, and for only NIS 30 it’s a fun experiment to put to the test and they serve generous portions of both so it makes for a fun date or diversion on a day trip north of Israel’s center.

A few reviews of recent Tishbi wine releases are in order since at the end of the day, wine is the backbone of their endeavors. Even though the bulk of their wines can be purchased for from NIS 30 to NIS 85 per bottle, they have surprisingly very good wines for those who want to splurge.

Their highest end red currently is their 2010 Jonathan Tishbi Special Reserve, NIS 230, 93 points, a single varietal Cabernet Sauvignon from their Judean Hills’ vineyards that was oak aged for about two years. The last two Special Reserve reds were from the 2004 and the 2007 vintages (they use the term Special Reserve more sparingly than many other wineries) and were popular more nuanced Bordeaux style blends. This vintage is a classic “New World” style intensely expressive fruit-driven Cabernet with classic notes of cassis, raspberry and spice with notes of oak-driven sweet tobacco and vanilla that might remind someone of a Napa Cabernet for twice the price. 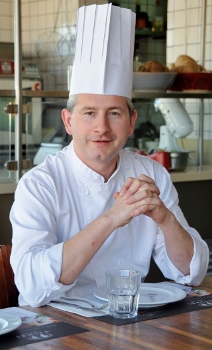 Chef Gunther Biedermann
In their Single Vineyard series which has recently delivered great examples of what heights Malbec and Petite Sirah can reach in Israel, the 2012 Tishbi Single Vineyard Ruby Cabernet, NIS 130, 90 points, is one of the few single varietal examples I’ve come across. Ruby Cabernet is a California-created cross between Cabernet Sauvignon and workhorse varietal Carignan to make a Cabernet Sauvignon like wines from drought resistant vines.

This wine has intense fruit on the nose and  less structure than a typical Cab but plenty of mouth watering acidity that is meant to be drunk young and is a better match for many meals than some more austere Cabernet Sauvignons. It’s not a wine suited for quaffing on its own but I try to judge wines for what they are and not what they’re not.

The 2013 Jonathan Tishbi Special Reserve Chardonnay, NIS 85, 90 points, is one of Tishbi’s best whites that I’ve ever tasted. Aged four months in oak barrels, this vintage for me seemed more balanced between fruit and oak and apples and pears than previous vintages with notes of creme brulee which make for a Chardonnay which a fan of Californian or Australian Chardonnays could appreciate.

So whether you stop at the winery in Binyamina, their cafe in Zichron Yaacov, their booth at a festival or order from a restaurant’s wine list, whenever, whatever and wherever you taste Tishbi, there are plenty of opportunities for their name to cross your lips and bring a smile to your face.