While only about 70 countries are in the right climatic zone to produce quality wines, almost every country without religious objections produces some kind of local spirit. Many of their distillers have gone on to deliver spirits which not only please their own populace and connoisseurs but have attracted an international audience.

Yet Israel, which is winning more and more awards and accolades for its wines, beers and cocktails, has yet to have any one spirit or category of spirits become an effective and well received ambassador abroad.

There have been attempts, for instance, with the Sabra brand of liqueurs, but it was more a gimmick than anything that caught on. Tourists seemed to buy a bottle as a gift, but I never recall ever being offered any in an Israeli house or a bar. Even wherever I saw a bottle sitting on a shelf it seemed it had been sitting there so long that if someone opened it a genie might pop out.

The anise-flavored Arak is extremely popular in Israel, but it's also popular in Lebanon, Syria, Jordan and Iraq, and every Mediterranean country has its own version of a licorice- laced libation. There are some premium Israeli versions of Arak that have emerged but it's questionable that they are distinct enough to create an international audience that would crave Arak when they seem well served with anise- touting spirits such as Ouzo, Sambuca and Absinthe.

There is, however, one Israeli innovation making incredible inroads  towards possibly staking that claim, and in 21st century parlance – ‘it's become viral’.  Tubi 60 was started in 2012 by two brothers, Hilal and Yanai Tubi, in their parent's apartment in Haifa.

The Tubi brothers didn't initially have any business plans when they decided to create an intoxicating beverage for their own enjoyment that met three key criteria. It had to taste especially good and different, it had to be easy to drink, and they wanted it to have stimulating, even invigorating properties that heightened one's enjoyment, yet did not have the debilitating side-effects of other liquors on the market. This was something the Tubis saw as lacking in not only the local Israeli market but also in the international market. So, when they started sharing it with friends, saying it caught on would be a gross understatement.

As its base, Tubi 60 is mostly distilled lemon juice enhanced with the juice of three other local citrus fruits infused with herbs and spices including ginger, ginseng, saffron, turmeric, mint, anise and cumin, bottled at a potent 40% alcohol similar to most rums, vodkas and whiskies. Since lemonade is often served in Israel with mint, and anise flavored arak is often served with grapefruit juice, these flavor profiles were already familiar to Israelis, and the addition of other complementary and even beneficial ingredients and flavors only made their concoction that much more desirable and sought after.

For the uninitiated, think of Tubi 60 as a cross in flavors between Limoncello and Chartreuse.

One thing amazing is that the growth seemingly happened quite organically. They have done little or no advertising, marketing or even active sales. I was fortunate that  I the camera-shy Hilal agreed to meet with me recently in Tel Aviv.  Restaurants, bars and shops, according to Hilal, contact the Tubis with orders instead of them seeking out sales. And with their Israeli clients, everyone gets the same price - from the smallest kiosk or bar to the largest chain, and that has bred loyalty from their wholesale clients who know they are always getting the best price because there is only one price - a concept almost foreign in a country where haggling is the rule and not the exception.

Consumers of Tubi 60 seem like an extended part of the Tubi family and the brothers interact with their fans directly through social media. The Tubi brothers speak with as much affection for their supporters as those who drink Tubi have for their product.  Don't get me wrong, not everyone loves Tubi 60 but no one seems indifferent. There are those who've tried it who haven't liked it, but when asking around  there were many whose faces lit up with smiles and a Pavlovian anticipation just at  the mere mention of its name.

Tubi 60 has grown in its acceptance mostly through word of mouth, and much of what's been written has been conjecture. So, the Tubis seemed to realize that, though being a cool hip underground option served them well in the local market, as they expanded into international markets, it was a good idea to go on the record lest rumors were accepted as fact. So, it's no surprise that I had never heard of it until a friend of the brothers contacted me, because it seemed it wasn't on the radar of many industry insiders, but it was on the lips of bar-goers and revelers, in a groundswell around the country.

From its first placement, in a bar in Jerusalem, the brothers have been willing to drive anywhere in the country to deliver a case, and within the first year they were being sold from the northern tip of the Galilee to the southern port of Eilat. Initially, it was only smaller shops and bars that were the primary distributors of Tubi 60, but as production grew and they were able to  meet the demand, Tubi 60 could  be found in most of the larger liquor chains in Israel – such as Wines and More and Yayin B'Ir (Wine in the City). 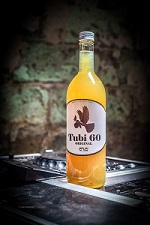 Just this year they are expanding internationally with shipments landing in the United States (in Austin, Texas, and in New York City), in Hungary, Germany and Norway. The United States, as the world's largest market for imported alcohol, shows maybe the greatest potential for new Tubi lovers, yet in Europe where herbal digestifs and aperitifs have a history and awareness, there's an affinity that should make Tubi a natural fit.

How best is Tubi 60 served? Well, most commonly it's served as a shot or a shooter. It's been finding its ways into cocktails, although Hilal prefers it straight up. "The benefits of serving Tubi are such that if you mix it with other alcohols you are lessening its positive effects and increasing the likelihood of having a hangover, which is one of the best reasons to drink Tubi as it was designed – to be less detrimental than most alcoholic beverages. If you are going to drink Tubi as part of a cocktail, adding juices or other non-alcoholic mixers is the best way to preserve its benefits. A Tubi and Tonic has become quite popular, as well as Tubi Libre which is Tubi with your favorite Cola. Of course, I can imagine that everyone at home, and bartenders as well, will find their own favorite way to serve and enjoy Tubi but we get a certain joy out of knowing that when served straight up, Tubi 60 provides a unique experience, taste and sensation that no other alcohol we've encountered delivers."