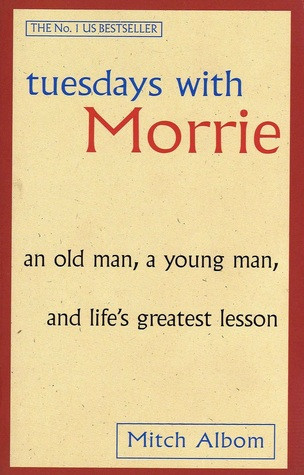 The book Tuesdays with Morrie had me fully engaged right from the very beginning. I was deeply touched by and moved to tears as I read through its pages. This gentle and human book filled me with love. In fact, love is the main theme of the book.

As Morrie often says “The most important lesson in life is how to give love and let it come in.” (page 52). The book changed me, and I am sure it will change my relationships and the way I go through life and death. It deals with the slow and grueling dying process of a very dear man, Professor Morrie Schwartz, through ALS.

Morrie’s dying was a prolonged and grueling process in which he gradually lost his physical capacities. Morrie was a giving and loving being who used the dying period to give as much as he could of himself. The Author succeeded in imbuing the book with Morrie’s spirit. As I was reading the book I felt like I was sitting there with Morrie, receiving all the love and compassion that was flowing from this dear soul.

Morrie was a professor of Sociology in Brandeis University, a prestigious school. He taught several classes and Mitch Album took all of them, as Morrie was his favorite professor. Morrie’s classes were unconventional. He taught about life, trust and Love. He was a friend to his students. Mitch had a special relationship with him and on Tuesdays they would usually spend more time together. Morrie was attentive and helpful. He would discuss with Mitch what was really important in life, such as following your passion and love. He would help him with his thesis and gently encourage him to aim for higher education. He coaxed him out of his seemingly tough shell and told him that it’s ok to cry. He gave him his time and attention freely and generously. He was compassionate and understood the alienation and difficulties that were faced by the young men he was teaching. Mitch called him Coach.

On Graduation day Mitch gave his beloved professor a monogramed briefcase as a gift. Morrie was so touched by the gesture and moved to tears. He asked if Mitch would keep in touch and Mitch promised he will.

Years have passed, sixteen to be exact. Mitch did not keep in touch. His life did not go as he expected and he was now a very different man from the youth that left Brandeis bright eyed and looking forward to making his life. Through a series of experiences, he has actually become quite hardened and jaded, He doesn’t love himself.

He doesn’t feel he is a good person. At graduation Morrie told him “Mitch, you are one of the good ones” but that is not at all how Mitch feels about himself at this point. He spends his life chasing the mighty dollar and success in his journalistic career. He does not give much attention to his wife and his ailing brother refuses to speak to him. There is no mention of any friendship in his current life, nor any word about his parents. He has not kept in touch with his University friends. The death of his favorite uncle from pancreatic cancer years ago left him frantic with the obsession to succeed and to not end up like his uncle.

One night, in March of 1995, sixteen years since he last saw Morrie, as he mindlessly switches channels on his television, he sees Morrie being interviewed on Nightline by Ted Koppel. Morrie has contracted amyotrophic lateral sclerosis (ALS), Lou Gehrig’s  disease, a brutal neurological illness where the person gradually loses all their physical faculties. It has no known cure. Seeing his old professor on television prompts Mitch to  reconnect with Morrie, who has never forgotten him.

He is filled with trepidations at first but gradually sheds them, coaxed by the love and compassion of his professor who sees right through him without any judgements. They establish regular visits on their special day, Tuesday. “We are Tuesday people” Morrie says lovingly.

Every Tuesday Mitch leaves his work behind and flies 700 miles to come and sit with Morrie. He begins recording the life lessons that Morrie gives him which are the replies to the questions he had prepared. But those Tuesdays are not just lessons. They are also a time were Mitch soaks up the love and attention of his professor and gets to give back and open up. He gradually changes from a hardened man to a warm and demonstrative person. He hugs his professor, kisses him, holds his hand and massages his ankles. He is not repelled by the smells or the deterioration of Morrie’s body and his increased dependency. He too loves Back unconditionally.

Morrie loves food. One of Mitch’s ways of showing love in the beginning when he is still in his shell, is bringing food from Morrie’s favorite deli every time he comes to see him. He continues with this tradition even when Morrie can no longer eat this food. It is very touching that even when there is no longer room in the fridge or the freezer, he desperately holds on to this form of showing his love.

The weeks go by with Morrie’s body deteriorating rapidly. He becomes more and more weakened and dependent on others. Because he has lived his life as a loving and giving person and continues to do so, he is surrounded by love and compassion during his dying process. He is not really helpless. He has all the help he needs to enable him to live his last days so he can give as much as he can of himself. His care takers do not flinch at their duties and they do them with love. He is going through this grueling process with dignity because he has created both a loving environment and an acceptance of the process to a point of relishing in some aspects of it.

Morrie imparts many valuable life lessons, spoken and unspoken. The spoken lessons are recorded on tape. The unspoken lessons are just as importantand are conveyed by the way Morrie has lived his life and is still living it to the fullest as he is dying. He discusses many subjects with Mitch, revolving around life and death, loving and forgiving, aging and family, culture and even reincarnation. Morrie who was born into the Jewish faith and later turned agnostic, playfully contemplates reincarnating as a gazelle.

There is no way that I could cover each of this book’s wonderful lessons here. Having read each page with utmost interest I feel so grateful to have had the opportunity to do so. It has given me joy, filled me with love, showed me solutions to situations in my life that have caused me great sadness. It has showed me what true positivity is like. It has showed me how to live and even how to die with dignity. It has reinforced my resolve to live a life where I give my attention, love and creativity to others and be of service. It made me want to live a loving, compassionate life even more than ever.

I will forever be grateful to Morrie Schwartz for his invaluable loving lessons and to Mitch Albom for bringing them to me and to millions of people. As Morrie said “Death ends a life, not a relationship.” (page 174). I feel Morrie lives in my heart now, just as he continues to be a presence in Mitch’s life.

Tara
2017-08-01
Excellent review. Riveting story. Thanks.
Kym Johnson Norfleet
2017-08-01
This review was amazing. Books should be life changing, particularly those on pain and passing over. Amazing and inspirational.
Estelle Marie Baines
2017-08-01
This sounds like the most wonderful book, Talya, and is particularly relevant to me on my journey. You did such a delicate and nuanced job of conveying the sweetness and wisdom of this man and this friendship. And how true that the body dies, but not the relationship.
Rebecca Cady
2017-08-01
Awesome, detailed description of book! Made me want to read it, coming at a time in my life where quite a few friends and family are passing away. Thanks for your insightful review.
Dexter Gekfand
2017-08-01
A very touching review, which clearly communicates the spirit of Mitch Albom's book and of Morrie himself. I feel that through this review I can appreciate the essence of the book, which I feel inspired to read. The message resonates quite well.
Dinu Stefan
2017-08-02
I read the review of the book. I love your style! You know how to put all these feelings , emotions on paper, you have a special style on writing full of kindness, love and compassion and easily draw the reader to your side, inducing an almost hypnotic state, managing to put it in the story, in the atmosphere very easily. You are an amazing person ,with a wonderful soul and an excellent writer !!
Colin
2017-08-02
This sounds like a wonderful story. Yeah... I think certain souls bloom and chime together. There are many forms of 'true love' and soul mates come in all shapes, sizes and guises. And such a well written article. Beautiful.
Patricia Greiner
2017-08-02
Flawless review. I have the film starring Jack Lemon that introduced me to Morrie. I feel like you, people like Morrie and Mitch impart wisdom in love to us who meet them. Great write up, Talya, 5 stars to you?????????
Annika Persson
2017-08-02
Oboy! I think I have to get this book! With this thoughtful and beautiful review you are contributing to the lessons of Morrie reaching even more readers in need of guidance. Thank you!! <3
Theresa Laster
2017-08-02
Wow. A beautifully written and comprehensive review of a wonderful book, that I, though a voracious reader, haven't happen to have read yet, but I will now. There are few who would take the time and energy to read, comprehend and review a book like Tayla did. Thank you! I look forward to reading more detailed reviews of deserving book from her soon.
Katherine
2017-08-02
I have heard of this book, but didn't realize how many wonderful lessons it includes. After reading this review I went right out and purchased a copy. I am looking forward with eagerness to sharing in the benefits the reviewer describes.
Mike Horton
2017-08-02
This informative review makes me want to read this book. I have a friend who was recently diagnosed with ALS. In fact he traveled to Atlanta early this week to receive an experimental treatment that will hopefully slow down the progression. Like the reviewer stated, there is no cure. After reading this review I plan to order the book. Hopefully, I too can become the type of friend Mitch was and do something for someone besides myself for a change. A good review makes the reader want to read the book. I intend to do just that!
PETER MCNAIR
2017-08-02
Excellently written, piqued my interest in reading the book for myself now.

Milestones 189
Robert Kwong at the Yeshiva