UNCLE SAM was a big man. His weight after one of his regular visits to the health farm would have come down to a mere 120 kilos which, considering his height of 185cm still left him with a considerable girth. Within six months he would be back to 150 which is the way his family and friends will remember him. His voice was unique - the tone can best be described as perpetually hoarse. He was one of those unfortunate young men who were in the trenches in France in 1917 when the Germans used poisoned gas. His youth, he was not yet 18, and his strength, enabled him to pull through, albeit with damaged lungs.

On his return to South Africa after a period of convalescence, he opted for a lump sum instead of a pension and opened a small general dealer store with this money alongside the diamond diggings near Kimberley. Sam’s real passion was not so much buying and selling as living close to the soil. He was ‘one of the people’, that’s what made him happy. He had natural skills and enjoyed manual labor, so building the store with a small dwelling alongside was not a problem. To supplement his income he boxed. He was strong and boxing bouts became a popular distraction for the diggers.

Life on the diggings was tough. Some diggers were luckier than others, finding big diamonds which could bring in hundreds of pounds. But people also had to eat. They needed tools and basic materials. Sam found whatever people needed, from a spade to a toothbrush and with low expenses he could afford to work with a minimal profit. He was ready to advise and help on all matters from plumbing to heartburn. He had a big heart and enjoyed the role he played.

With the passing of time the diamond business became bigger and bigger. Large companies stepped in with sophisticated methods and the diggers became a thing of the past. Sam moved to town, bought an old property in Berea, a middle class neighborhood not far from the center of Johannesburg and well served by a nearby tramline. With a small team Sam converted it into a modest boarding house where everyone knew everyone, and it gave Sam a modest livelihood. He enjoyed an occasional afternoon matinee and his wife Annie enjoyed running the “hotel”.

However, Sam was not cut out for life in a crowded city and he became bored. His wife would not hear of leaving the city, she thought he had gone mad. So Sam decided it was time for them to part and set about finding another Annie. To everyone’s amazement within a year he had not only found another Annie but more surprisingly she was the spitting image of the first Annie. She was the same height 160cm, same round face, same coloring, same stocky frame but was 15 years younger.

Marika adored Sam, who was nearing 50, and was ready to go anywhere with him. It did not take Sam long to find exactly what he wanted. Marika had emigrated from Hungary shortly before meeting Sam. A year after their marriage she presented Sam with a son, Alex. He was delighted and set about looking for a new challenge and a home for his family.

He found a small neglected farm on 150 acres with an old dilapidated farm house that had been on the market for some years without any takers. Sam liked a challenge and offered £7,000, a low offer because it was agricultural land without its own source of water.

The farm was situated 10 km from Vereenigen, a small town with 20,000 inhabitants close to the Vaal River. The river, the second biggest in South Africa, was famous as a center for recreation and water sport. Bestowed with great natural beauty it was perfect for family picnicking with rowboats, canoes and pedal boats for hire. There was a boating club with sailboats and speedboats in a yacht basin. It was not long before Sam had his own ski boat tied up in one of the berths, and in no time Marika had become a skilled water skier. Sam of course was the pilot and this was an added attraction for his nieces and nephews to enjoy his unrivalled hospitality for a week or two during the school vacation.

Sam was a good linguist and enjoyed listening to the stories and beliefs of African folklore. He had been told by an elderly African that if one is looking for water one should look for the biggest ant heap in the area and dig and dig. Sam found a very big ant heap and hired a driller to come and drill. The driller was worried when at 40 meters they had found no trace of water, but Sam told him to continue. At 100 meters the driller was ready to pack up. Sam agreed that if at 150 meters there was still no sign of water he would call it a day. At 135 meters the water appeared and at 140 it was flowing. Sam was overjoyed, as if he had struck oil. He was like a child with a new toy. He renovated the house, doubling its size. He developed a strawberry farm, and a piggery that eventually housed 3000 pigs, bought some live stock, built a swimming pool, all with his own hands and with the help of two able and loyal Africans as assistants. He loved entertaining and during school holidays the farm was home to his close family and friends who would enjoy his hospitality. Sam was happiest when he was building and his next project was to build a tennis court, not that Sam or his wife were tennis players.

Marika turned out to be not only a devoted wife and mother to Alex but also an excellent organizer and a capable businesswoman.

With Marika’s support, Sam had established his first butcher shop three years previously. He would find the most experienced butcher, checking his credentials carefully. Sam was not naive. The deal was to find a good location, design, build and equip the shop according to the butcher’s needs. The latter was to be responsible for the buying and selling, Sam would provide the necessary start-up capital and receive 10% of the daily turnover. Whatever the butcher made above that was his. Obviously the butcher had to be competitive both with regard to the quality of the meat and the price the clients had to pay.

It worked so well that within a couple of years Sam had three identical butcher shops under his name in good residential areas. Marika took care of his business activities, strawberries directly to half a dozen fruit retailers, and making the rounds of the three butcher shops to collect their share.

Alex was by now five years old, a child of nature. His best friends were all Blacks and like them he would be barefoot swinging on a rope tied high up on a branch of a tree. There were horses and a pony to ride, dogs and cats to play with, chickens and pigs. The chickens were for the house and the staff, but the pigs were serious farming for the market.

Sam was not against saving money, so when the tennis court was finished he happened to spot a classified advertisement that someone was giving away the high wire fences around their tennis court. The offer was conditional on the person taking full responsibility for the taking down and removal of the fences. Sam phoned the lady in question and assured her that he would be coming with his truck that same morning.

The lady: “I understand that you personally will come with helpers and a truck. How many days do you estimate?” Sam: “I hope to finish it today”.

Sam arrived in his work clothes driving the truck with his tools and with a Black assistant. The house, situated in a prestigious neighborhood, was large and built to impress with a high decorative wall surrounding the property and with an impressive arched entrance and wrought iron gate. He was greeted courteously by the lady of the mansion and got on with the job. Two hours later the entire fence was loaded on the truck. The lady congratulated Sam saying that she had never seen anyone work with such skill and at such a speed. “I have a large tree in my driveway that’s been bothering me for a long time, would you be ready to cut it down and remove it and what would be the cost?”

Sam: “Since I am here I will take only £20, but I have a problem – I must collect a parcel of meat before 1pm from the butcher in Oxford Road. If you could do that for me I will start to work.” So with the matter settled Sam and his helper got to work.

The lady went to the butcher and discovered that Sam Beare was the owner. When she returned with the meat her whole manner had changed: “Mr. Beare you must come inside to drink. My husband is a psychologist and is due home soon and would be very interested in meeting you.”

Sam answered: “I am in no condition to go inside but a glass of cold water would be welcome.”

“Mr. Beare, why would a man in your position agree to cut down my tree?”

”Firstly I enjoy physical work. Secondly there is a market for firewood and I will clear at least £40 when I sell the wood, and finally I was happy to be able to do what I could to help a lady.” 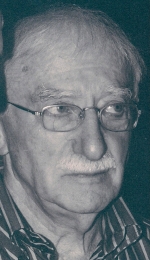 Geoff was born in S.Africa in Dec. 1931 the youngest of Annie and Myer Tollman’s 6 children. At the age of 10 he was selling trees in the JNF forests having enjoyed a Zionist upbringing. Both his mo...
More...