A small piece of heaven on earth in Israel is how one can describe Gail and Aryeh Danieli's botanical park and plant nursery situated at Kibbutz Bachan.

Sandwiched between large and small Israeli Arab Villages and very close to the Green Line, the Palestinian  autonomous city of Tul Karem just down the road and across the security fence, the Danieli's amazing collection of  orchids and other plants, exotic mushrooms, birds, fish, fauna and animals definitely deserves the title the  owners have awarded the place – Utopia.

"In creating this park Aryeh, and I have tried to create our idea of Utopia combining our way of life, our ideologies and our business into one entity where Israelis and visitors from abroad can spend some time in a place where nature rules," explains Gail who originates from Portland, Maine and made aliyah in 1983.

I caught up with Gail pottering around Utopia just hours before she and Israeli-born Aryeh were due to fly to Thailand to check out a few more  species of nature's exotica in orchid form that might possibly be allowed to be imported to Bachan and join the  hundreds of different species the Danielis have already successfully cultivated.

The orchids are not only eye-catching but also almost blindingly bright in color and beauty and in some cases seemed to live up to the name Utopia, out of this world and unreal.

The 15,000 orchids in the Danieli's orchid park come in all sorts of shapes and sizes.  Some sport stripes, some dots or dashes and some – a bit of everything.  There are those that seem to smile, others that could well be colorful mouths with full lips and even a hint of a tongue deep down there inside.

The orchids seem totally at home growing out of rocks, hanging from trees or sprouting up from the ground inside the massive dome of the orchid garden – a 'mini-Eden project in Israel' I'm sure British visitors would think.

The design and much of the laying out of Utopia was physically done by the Daniels and their sons over a period of two years.  The family resides in a nearby moshav where they were running their own successful nursery business before realizing their dream and building Utopia down the road and around the corner, initially taking over a defunct experimental nursery for exotic plants that was lying in disrepair in Bachan.

"We combined efforts with Kibbutz Bachan and the Emek Hefer Regional Council and received the blessing of the Department of Agriculture and visitors can now enjoy and learn from that cooperation and the fruits of our hard labor," says Gail with a broad smile. 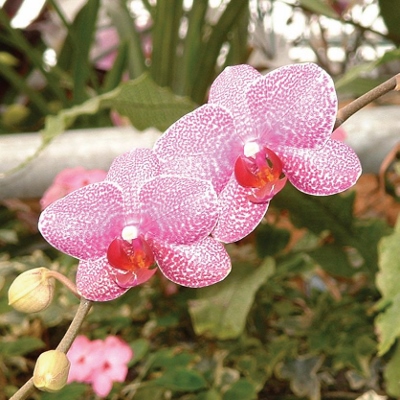 When Gail was 13, a new Israeli emissary arrived in Portland and took over the teaching of her Hebrew school class – and she credits him with instilling in her the thought of living in the land of the Jews.

We finally had a teacher who was under the age of 70, one who had the perfect Hebrew accent, one who didn't wear a suit and tie and who would throw chalk at any student who didn't pay attention to him while he was talking about the love of his life, Israel."

A teen tour during the summer when she was sweet 16 didn't disappoint Gail, and her third year of college was spent in Israel on a program where students studied and worked on Kibbutz Tzora.  After graduating college she "bought a one-way ticket to Israel," met Aryeh and the couple settled on the moshav.

"Both sets of parents wept at our wedding, which is of course normal but they were not tears of joy.  We were totally out in the boonies, 'right on the border of Tul Karem and pretty much out of money, " explained Gail.

The young couple put in a stint working as gardeners, then moved on to growing vegetables, then cuttings for export and also opened up a retail greenhouse in Netanya before finally building 40 dunams of covered greenhouses for house plants in the moshav and sending out five trucks a day delivering their plants to garden centers all over the country.

The road to Utopia has been a tough haul for the Danielis.

"We feel we are staying true to the Zionist dream of returning to the land, working the land, making the land green.  We have dedicated much thought and effort to making this park an educational experience and expect many schoolchildren to pass through Utopia's gates to learn about ecology, botany, water conservation, symbiotic relationships in nature, agriculture… the list is endless," she says with a sigh.

One enters Utopia through a dark tunnel.  When one's eyes get accustomed to the dimly lit stone sides of the tunnel, groups of different species of mushrooms become visible.

Then it is out of the darkness and truly into Utopia as thick rubber curtains are pulled aside and the sound of waterfalls, sudden glare of sunshine, greenery and all the different colors are almost too much to take in.

Walking along the pathways, exotic plants on all sides, birds chirping merrily above and the dashing of the water on the small lily-filled ponds causes one to be reduced to constantly repeating one word, WOW!

Outside the dome a large area has been landscaped for picnics, a small maze for lost kids to be found in and small hills each created with a different themed garden as well as an animal petting corner.

There is definitely something for everybody in this man-made paradise and the Danielis still have plans for further development.

"By creating this park, I feel I am giving something back to Israel for what she has given me," concluded Gail as she was about to leave for the airport.

Sadly I also had to exit Utopia – but will surely be back soon.

Talya Dunleavy
2017-04-08
Thank you for this vivid description of this magical place. It definitely made me want to visit it.