Michal Akerman supervises over 2000 dunams of vineyards in Israel

The Tabor Winery has dramatically increased its wine production with a 50% increase over the last few years from about 1 million bottles to 1.5 million bottles. It is not only producing more bottles of wine but also more styles and varietals and what many, including myself, consider better wines than it has in the past. One key factor is their viticulturist, Israeli-born Michal Akerman.

Recently, after a tasting of Tabor wines in Jaffa, I interviewed her to find some insights into the role she has played in helping Tabor become Israel’s sixth biggest winery.

Where are you from and when did you first get interested in wine?

I'm from Kibbutz Gesher. My mother is a fourth generation Israeli and my father is from Peru. All my life I’ve worked in agriculture, but I first entered the world of wine and vines when I was traveling in South America, after the army, got stuck in Chile without any money and began working in the vineyards that belonged to some of the greatest wineries in Chile at that time.

When I returned to Israel, I studied agriculture and received my Bachelor of Arts degree  at the Hebrew University and then a  Master of Arts at the Volcani Institute of Agricultural Research, focusing on rootstocks. During the time I was studying for my first degree, I worked as a harvest machine operator for three years and, at the same time, as the vine plant protection inspector at the Barkan inery. During my second degree and for five years after that, I worked at the Barkan Winery as a viticulturist, the profession of growing grapes especially for wine.

I've already worked for five years at Tabor winery as their chief viticulturist. In between, I worked for one season in South Africa and have served as a consultant for some wineries in Cyprus and Italy.

How are you involved in the wine making at Tabor?

I see viticulture as an integral part of winemaking. They must be together all the way. Good wines can only be produced from good grapes. Good grapes can only be grown if you understand wine. As a team, the winemakers and I conduct wine tasting together, analyze the grapes in the vineyards and the wines as they develop in the winery and make decisions about the methods, aims, flavors and aromas that we want the grapes to develop in the vineyards,

Do you ever get to make your own wine? Do you have any desire to?

No and no, but my desire is to grow my own vineyard someday which will provide the best raw material ever for other winemakers!  Wineries from all over the world would be interested in my grapes.

How long is the growing season? 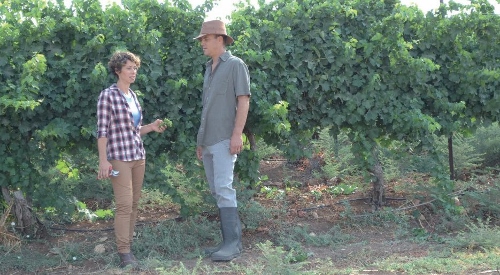 “Every wine grapes has its own needs,” says Michal

From the end of July for the whites in Tabor, and until November for the reds in the northern Galilee and Golan.

Can you describe the differences or challenges for some of the different grapes you’re growing? For instance, tell us the difference between the various white grapes -Sauvignon Blanc, Gewurztraminer and Roussanne in the vineyards?

It is a pretty long answer. Every wine grape has its own needs for growing - parameters like soil, area climate, micro-climate, the specific wine those grapes are intended for and more. I’m being given the resources I need to treat every vineyard I manage individually. There are lots of differences in the growing aspects between the combination of cultivars (grape variety), rootstock (on to which the vines are grafted), soil and climate.

How has your role grown since joining Tabor five years ago?

When you went to school how many women were in your classes compared to men?

About 30% of the students were women, but none of them continued on to specialize as viticulturists.

Did you ever encounter any resistance to you as a women starting off as a viticulturist.

Never in my life did I find myself having a gender problem. I believe in professionalism and that helped prevent any bias.

What’s the seasonal work cycle like for a viticulturist?

We work very hard from April, the growing season, to the end of November, through ripening and harvesting. In the winter I’m dedicated to attending exhibitions, providing office summaries and analyses of the last season, and by February we begin pruning the vines for the next season.

What do you feel have been your greatest accomplishments?

Finding and matching the best growing area for the right wine grapes and their corresponding rootstock. This is directly connected to our higher quality raw material - our wine grapes which contributed to a remarkable increase in the quality of the wines at the Tabor Winery

What brings you the most joy and satisfaction in your job?

To see our winemakers satisfied with the grapes that they’re getting during our harvest.

Any advice for women who might want to go into the business either as winemakers or as viticulturists?

Be professional. Work hard. That’s the way I did it.