Those were the words with which Baruch Tanaman, ESRA chairman, ended his introductory remarks at ESRA's biennial Volunteer Awards event, eliciting sounds of heartfelt appreciation from the audience. The lovely venue, Raanana's Beit Samueli, was filled nearly to capacity by award recipients' families, and ESRA volunteers and members from Nahariya to Eilat. The 14 award recipients hail from even further afield, representing nearly every corner of the English-speaking world including the UK, Ireland, across the USA, South Africa… and even a couple of native Israelis.

The event was emceed by executive member Lawrence Bertfield, presided over by Baruch Tanaman, and honored by words of appreciation from Raanana Mayor Eitan Ginsburg. Taking the stage to a standing ovation, Merle Guttmann, ESRA Founder and Life President, paid tribute in her talk to her recently departed husband, Gert, who was himself an exemplary ESRA volunteer.

Choosing the awardees from among ESRA's 800 volunteers is a difficult task. Recommendations are sent to the Volunteer Committee from all of ESRA's branches and committees.  It then falls to them to choose the dozen or so volunteers to be honored. This year's choice included the following.

Naomi Aharoni (Albany, NY, USA) is a mainstay of the Rishon Lezion branch, ensuring the success of its activities and projects whether it be the knitting group, after-school children's center or tutoring English.

Joseph Beenstock (Manchester, UK) Volunteering with ESRA in various branches since 2011, he was instrumental in setting up the Ramat Aviv branch, hosting activities in his home, and bringing in interesting speakers.

Fonda Dubb (South Africa) Having catered events for ESRA Raanana 30 years ago, she brought ESRA with her to Eilat, where she sold Ethiopian embroidered goods on the beachfront, and ensured an active ESRA Eilat branch.

Marise Gordon (Dublin, Ireland) A backbone of ESRA Herzliya, she is a committee member, regularly hosts branch and regional meetings, is Coordinator for the English Tutoring Program, and a long-standing Befriender.

Sadly, Shuka passed away in hospital just days after the Awards event. One of our Sabra volunteers, he was ESRA's National Treasurer for over 15 years, submitting reports, advising, and being a valued member of our Finance Committee. He is sorely missed. May his memory be blessed.

Ilana Harf (Haifa, Israel) A mainstay of ESRA Modiin, she volunteers at the bookshop supervising finance and the Hebrew section, and supervised renovations at the Neve ESRA project for children at risk.

Carole Kaye (UK) A member of the ESRA Netanya committee, and the lecture and events sub-committees, she also helps distribute magazines and runs the local office with its “Meet and Greet” mornings.

Susan Kurnedz (Manchester, UK) With the Netanya branch, she initiated two very successful projects: ESRA’s Support & Counseling Service, and the ESRA Recipe Calendar. She is standing for the Executive at our next AGM.

Michael Porter (South Africa) An active member of the ESRA Magazine Editorial Board, he contributes articles, book reviews, and synopses for the magazine website, as well as distributes the Magazine to commercial venues wherever he can.

Sally Sher (South Africa) Secretary of ESRA Kfar Saba for 15 years, she is involved in all aspects of branch activity, including projects and the English Tutoring Program, as well as helping to pack ESRA magazines.

Frank Taylor (UK) Having begun volunteering with ESRA 5 years ago, Frank became wholeheartedly dedicated to English tutoring of children in the Students Build a Community projects, and helping them love it.

In addition to these 12 deserving volunteers, ESRA presents a special President's Award and Chairman's Award to exceptional volunteers.

The ESRA President's Award was presented to Adele and Mike Rubin for their "outstanding volunteering and dedication in ESRA since its inception, developing and nurturing volunteers, fulfilling leadership positions, running projects in Sderot and ensuring that ESRA receives the funds it needs to continue and expand its work.” 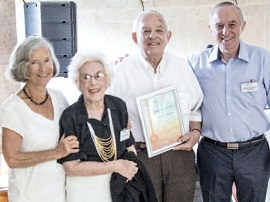 The ESRA Chairman's Award was presented to Ed and Betty Wolfe, a young couple who a few days later celebrated their 70th wedding anniversary, for their outstanding volunteering with ESRA over two decades, giving freely of theirr time and effort, whether on the Executive Committee or in ESRA’S second-hand shops, with untiring dedication to aiding and supporting the work of ESRA.”

Refreshment before the award ceremony was impressive and delicious, entertainment by a group of young girls from Netanya's ESRA Ethiopian Dance Group was lovely, and the audience enjoyed singing along to old favorite tunes with Rachely Wollstein. As many people remarked, it was a most enjoyable event with a warm family feeling – the ESRA family. 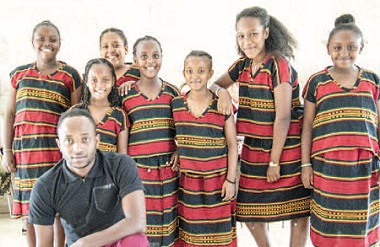 The Ethiopian Dance Group together with their choreographer