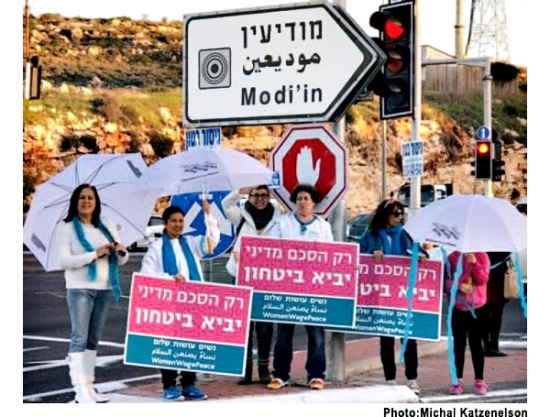 United they stand ... Women Wage Peace at the Shilat intersection, Modiin.
Bernice Lewak Zohn is standing under the stop sign

“Action without vision is only passing time;

Vision without action is merely daydreaming;
But Vision with Action can change the world.”
Nelson Mandela.

I am standing at the Shilat intersection in Modiin. I am part of a group of sometimes as many as 10 women, all wearing white and turquoise clothing - white for peace, turquoise because it is a color which is a blend of the blue from the Israeli flag and the green from the Palestinian flag. I am a Jewish, Anglo woman, born and grew up in South Africa. I stand shoulder to shoulder with Israeli women and Israeli Palestinian women.

We have brought a loudspeaker and recorder with us so that all passers-by will hear songs of peace, sung in Hebrew, Arabic and English.

We hand out sweets to passers-by and postcards which bear the name of our movement: Women Wage Peace - in English, Arabic & Hebrew.

We are also willing to talk to whosoever stops to question us about our movement.

Our presence draws a variety of responses from the stream of passers-by, some Palestinian workers, some Haredi persons.

My heart is warmed by a feeling of kinship with my fellow women, and by a sense of hope; and I feel a need to tell about this lovely organization to all English speakers and especially to my fellow South Africans - those of us who watched apartheid destroy the moral fiber of generations. Those of us who felt that our easy South African life style was built on the backs of others. Those of us here - Palestinian and Israeli, Jew, Druze and Arab - who are amazed and appalled that the world continues to send children to fight and die. Those of us who feel that it is imperative that there has to be an ongoing search for understanding and peace - no matter how long it takes and no matter whether we think that the other side is available or not.

How did all this come about?

In 2014, during Operation Protective Edge in Gaza, worried mothers of soldiers began connecting on Facebook, to give each other support and comfort. As the dialogue developed and continued, a feeling grew stronger and stronger that the repetitive and frequent outbursts of aggression - the cycle of violence that causes anguish on both sides - has to stop. “Enough - we have to do something”, was the feeling.

Women of all backgrounds (Druze, Muslim, Christian, Jewish, Leftists, Rightists, religious and secular) reached out to each other, inside Israel and across the border; and thus a movement was born.

In 2015, a year exactly to the day after Operation Protective Edge, a tent was raised outside the Prime Minister’s office in Jerusalem. For 50 days (the duration of Protective Edge) people came and went and joined in a peaceful demonstration by fasting, as a way of commemorating and mourning the loss of life on both sides of that most recent of the recurring battles which blight our part of the world.

The women sat down and started listing principles and ideals:

Devoted to principles of democracy and equality, the movement has no specific leaders and is non-hierarchical.

There is a steering committee of 4-5 women, who are chosen each year to coordinate the activities of the different active membership teams. In addition, there is a group called the “Hundred Team” which meets four times a year to make decisions and determine which projects will be undertaken. It is currently composed of 180 active members. Anybody can propose an idea for a potential project; all ideas are seriously considered, and anybody can join.

An early project, which has been running for years, is called Piece for Peace: A huge quilt, made up of squares handmade and contributed by individuals working in groups, from Israel, Palestine and many other countries, including Europe and the USA. Each square expresses a maker’s view and / or symbol of peace.

The March of Hope: In September, 2016, a Walk was begun from Rosh Hanikra in the North to the northern part of the Dead Sea, where we were joined by thousands of Palestinian women who share the dream for peace. Later we held an Assembly in Jerusalem in the presence of Leymah Gbowee, Nobel Peace Prize winner, who led the women’s movement which brought an end to the civil war in Liberia in 2003.

Peace Journey: In September 2017: Once again, a series of events and bus tours took place from all around Israel, at the Dead Sea and Jerusalem; this time 30,000 people attended the final assembly.

Mothers’ Tent: In the summer of 2018, we erected a tent in the Rose Garden in front of the Knesset. Here we hosted politicians from all sides of the political map, as well as opinion leaders, artists, various shows and movies, all aimed at reminding our leaders that we demand a political agreement and that this is possible to attain. In 2019 the Mothers’ Tent was again erected, this time in Rabin Square, Tel Aviv, where it stood for a month until the last days before the election.

Young People’s Congress: In November 2018, we held a Congress in Tel Aviv, aimed mainly at a young audience. The Congress hosted high profile professionals, politicians and ambassadors, panels and discussions under the title of “Removing Barriers to Peace”.

Hand of Peace on The Path of Peace: Zehava, an enthusiastic hiker, hiking along the Path of Israel, noticed that the walk includes many memorials which commemorate and celebrate military heroism. She decided that she wanted to create, in addition to this, a path which would creatively concretize the notion of peace, similar to “Ceramic messages of peace on a concrete wall” (ESRAmagazine no. 198, Feb/March 2019). Zehava’s “Hand of Peace on The Path of Peace” will specify places which represent an intention for peace, including artists’ contributions representing the Hand of Peace, to these specified locations.

All these events can be viewed on YouTube, and carry translations into a variety of languages, including English.

We must keep going.
To succumb to despair is to cooperate with inaction.
Let me end as I began, with Mandela’s words: “Vision with Action Can Change the World”.
Sign up and join us in any of the many activities of Women Wage Peace, across the country.
Please take a look at our website: www.womenwagepeace.com.

Tessa
2019-06-29
Very important especially now
Shelagh Shalev
2019-07-15
Excellent informative article, clear and succint. Wanted to give it 5 stars which it deserves but 3 popped up and I couldn't change it. 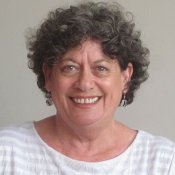 Bernice Lewak Zohn has an M.Soc.Sc (Social Work). She is a Family & Couples Therapist, Trainer and Supervisor. She came to live in Israel from Cape Town, South Africa in 1972. She studied with ...
More...