A brand new stretch of picturesque dual carriageway further upgrades Route 90 bypassing kibbutz Ayelet HaShachar and ends just before the turnoff to moshav Yesud HaMaala.  The verdant panorama that unfolds itself before the eyes of those descending the long straight road into the valley where the moshav is situated is different from that which faced three harbingers from the First Aliyah. In 1883 they had been sent forth from Poland on a mission to find land that would be a "heritage of field and vine" for those who were to make aliyah.  Their search brought them to Safed where they met with the prestigious Abu family who had purchased the rights to huge tracts of land, in the region of Safed.  The night before they set out to see the suggested land some residents took them aside to warn them of the dangers inherent in the swamp areas surrounding their intended destination. 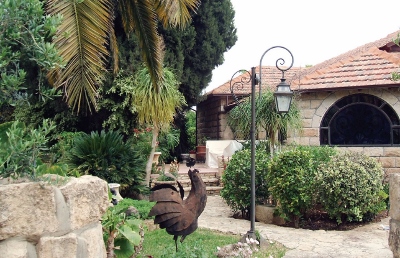 But they were enchanted by the scenic beauty of the valley with the mountains of the Upper Galilee to the west and the Hermon to the east and did not heed the warnings.  The waters of the Hula Lake enticed and excited them into thinking that agriculture would be easier with a continual on-the-doorstep supply of water.  Upon surveying the land they believed this would be the place to fulfill the dreams of a return to the home of their forefathers and to bring forth bread – "lehotzi lechem min ha'aretz'. They were introduced to the two brothers Mizrachi, relatives of the Abu family, who were already farming in the area at the Mei Merom Colony.  The rights to 2,500 dunams of the land in the valley were ultimately purchased from Rabbi Abu of Safed.

How mistaken their decision was to be proved. Initially, seven families, part of the First Aliya from Poland and Latvia, came to form the settlement and were later joined by others amongst whom was Lev Lubovsky who had come to Israel with his father from Boston and set up a holding on the banks of the Jordan River at the Banot Yaacov Bridge.  Together, with the assistance of the Mizrachi brothers, the settlers began to work the first hundred dunams of land.  On it they planted stretches of olive trees, date palms, orchards of pomegranates, citrons and even white mulberry – of which the leaves would be food for the silk worms they hoped to breed.  But their efforts did not achieve any marked success – even with the assistance of experienced land cultivators there were difficulties in finding suitable methods to make the crops really flourish to a large extent.

Their living conditions were minimal – initially simple tents – no building permission was granted by the Turkish Pasha, nor were the full rights to the land approved.  In desperation they adopted the same type of shelter as used by neighboring Bedouin tribes and learned how to build the huts out of the reeds and papyrus that lined the neighboring swamps and river banks.  It was a backbreaking task carried out with minimum tools and transportation.  Still they did not lose faith in the goal.  Part of the their belief came from a granite stone with an Aramaic inscription on it that was uncovered whilst they dug and prepared the soil.  Upon it was a biblical inscription; in later days the foundations of a Byzantine synagogue were uncovered on the land.  But even whilst their crops were struggling to bloom, they did not lose hope.

Financial help arrived from overseas and in 1887 the Baron Edmund de Rothschild visited the region, coming first to nearby Rosh Pina.  He was searching for land that would produce blossoms for a perfume industry.  After meeting with the elders of Yesud HaMaala he decided to take them under his protection and give them assistance.  With his influence – and money – full rights to the land were obtained and in 1890 the first cornerstone to a stone-built home was laid. 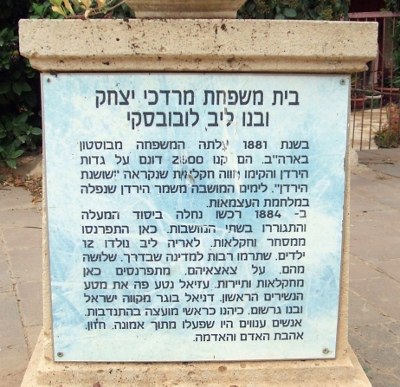 A plaque in memory of Lev Lubovsky from Boston & the Mizrachi family who worked the first 100 dunam’s of land.

However the blossoms withered and eventually it became obvious that agricultural conditions did not exist which would produce the standard of flower required for perfumes.  It must be remembered that those who came were not born "people of the soil" but only a vision and they lived with the words they were told upon arrival: "God brought us here and only He will take us away."  As they struggled to produce an existence from the land, malaria and black water fever took their toll, especially of the young.  Although in 1888 scientists had discovered a way of combating malaria, the use of this treatment did not reach them until 1913 when a doctor, and expert on the subject, arrived, distributed quantities of quinine and instructed them on the methods required to combat the mosquito.

As one walks in the heart of the old settlement and stops to read the pages encased in front of some of the remaining stone houses, the pictures of deprivation and loss fill one's mind with sorrow – two, five, seven and even twelve children per family fell prey to the anopheles mosquito.  Throughout the years the families who stayed were the victims of continual attacks and robberies from the neighboring Arab population.  They were also the only settlement in the region to survive the British mandate as Tel Hai.  Metulla and Hamra were abandoned.

Today Yesud HaMaala is a small haven with picturesque houses set in lush gardens that wrap them in a rainbow of nature's colors; they are thriving producers of soft fruits.  The draining of the swamp lands which commenced in 1956 and an additional three thousand dunans of land which they were allotted after the independence of the State, plus education in agriculture and modern methods have at last brought the hopes of those early settlers to fruition.

With thanks to Arik Lubovsky, writer, historian and guide, resident of Yesud HaMaala and great grandson of Lev, one of the original settlers.