Prayers for Those who Died in the Holocaust

Remembering . . . lighting candles at the joint ceremony in Modiin

They did it again. In another show of community solidarity, members of ESRA Modiin and Hadassah Israel Levonah Chapter joined together and successfully presented an excellent Yom Hashoah program.

The audience of over 200 people were welcomed by Rose Scharlat, co-President of Hadassah Israel Levonah English Speaking Chapter, and Shlomo Pazzy, Senior Deputy Mayor of Modiin, brought greetings and thanks to the organizers on behalf of the Municipality.  He noted that “Yom Ha Shoah, which falls on the 27th of Nissan, commemorates not only the evil and tragedy that took place in Europe, but also the heroism of so many. We salute and honor the survivors.” He told us how pleased he was to see such a large crowd, and that our community of English speakers is growing. Shlomo had promised us a bigger venue than last year and here we were in this beautiful new building.

Chaya Subar, an openly hidden child of the Shoah, was born in Nadworna, Poland (now the Ukraine). She was still a baby when she was given for safekeeping to a Christian couple, Carolina and Stanislav Klimik. Her new parents promised to return her when the war ended. She suffered greatly during the war years; her father was killed fighting with the partisans, but eventually she was reunited with her mother, and in 1949 they emigrated to the USA. She and her husband made aliyah in 2007.

When Chaya began to question the validity of her early childhood memories, she even tried a regression specialist hypnotherapist but to no avail. Only when she visited Nadworna last year, did she realize that all her horrific childhood memories of macabre beatings and killings were in fact true.

Could she forget? Did she forget? No! Chaya’s answer was to give back, by interacting with young people, educating them, and telling them that Hitler did not differentiate between Orthodox, Conservative, or Reform Jews. She also worked with hospice patients for 30 years. Today, she is the mother of three children, grandchildren, and great grandchildren.

Edie Kalb made aliyah from Toronto with her husband Jack, a year and a half ago. She was born after the war in Czechoslovakia to Holocaust survivors, and read a poem entitled ‘The Death Train’ that her mother had written in 1944. It told of the journey in the cattle cars, the death trains with inhuman conditions, as they were transported to Auschwitz. Calling her mother’s story ‘Through the Gates of Death’, prior to 1939, her mother’s family were well settled on farmland. Edie’s mother, Helen, was sent to a Czech school, and her father gave her lessons in religion. Many of their gentile neighbors were employed by her grandparents and knew about their religious practices.

After the war began, slogans such as ‘Death to the Jews’ became rife. Helen and her sister were sent to another village to learn dressmaking where they made garments for the wives of Nazi officers. Ordered to leave, they were herded into a cattle car with appalling conditions where all individual dignity was lost. At Auschwitz, Helen was separated from her mother and grandmother, but miraculously survived weighing a mere 35 kilos at the end of the war.

Edie became involved in Steven Spielberg’s Shoah Visual History Foundation in 1966, as the first Hungarian speaking interviewer. Each testimony had to be translated into English. Her presentation, she said, was a way to pay homage to her mother, and to convey her message to never forget, or history will repeat itself.

Two youngsters, who had participated in the recent March of the Living, gave heart-warming personal accounts. Rivka Shemesh read from her journal about the visit to Majdanek. The gas chambers, crematoria, and mountain of ashes were horrifying. She had difficulty breathing and broke down upon hearing the Shema, because so many victims had yelled the Shema before going to their deaths.

Idan Kofman wrote and read the following after his visit to Auschwitz:

“I, Idan Kofman, came out of Auschwitz. I entered the camp on Sunday, September 10th, 2017 at 9:36 am and came out on Sunday, September 10th, 2017 at 14:17. I did not enter the camp after a five-day ride in a rusty, overcrowded train, stuffed with 200 more people under disgraceful conditions, with only two buckets that serve for the purpose of drinking and defecation, suffering pain and frustration.

I entered Auschwitz following a 30-minute drive, after having breakfast and a good night's sleep.  I did not take part in the selection to the right or left, nor was I separated from my mother and father and my little sister. I was not beaten or starved, nor did I cry or shout. I just stood there, sad and aching, failing to understand and to digest the sights and the horrible stories and events that took place inside this extermination camp.

I was not forced to take off my clothes, shoes, and dignity and did not have to stand in line towards my death, near people whose humanity and hope had been lost. I did not walk into the gas chambers.  I put on my white delegation sweatshirt just before the ceremony, which took place in the proximity of the crematoriums, I read the text in front of my friends and I sang Hatikva. 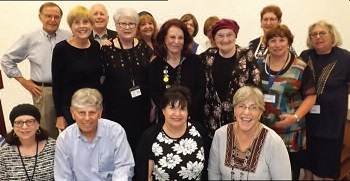 I did not come out of Auschwitz as a story, a photo or a serial number, via the chimney of the crematorium out to the open sky. I came out by foot, on my own, walking on the rails which had led my people to their end.

I know life goes on for me, I will join the Israel Defense Forces, I will build a family and live as a Jew in the State of Israel. I am grateful for having been granted the privilege to stand in Auschwitz and to preserve the memory of my nation which was murdered.  I am obligated to continue the heritage of memorialization of the Holocaust victims forever.”

We, the older generation, are concerned that the message to keep the memory of the Holocaust alive for the new generations may disappear. After hearing Idan’s simple but so effective message, I think we can trust in the education given in schools here in Israel, and be hopeful that the future generations will continue along the same path of remembrance.

Carol Lipman, Chair of Membership for ESRA Modiin, read out the many dedications that had been made in memory of family members and friends.

Rabbi Jeffrey Shron gave a beautiful rendition of El Maale Rachamim, and concluded the meaningful and dignified evening leading the audience in the singing of Hatikva.