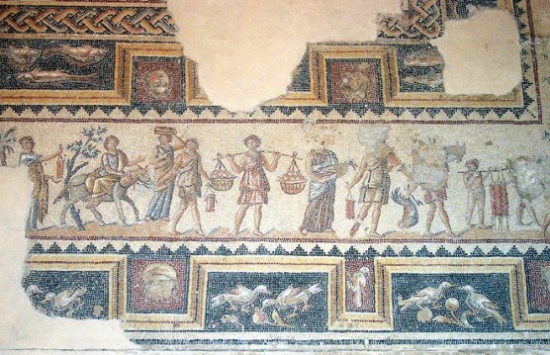 NOT TOO many folks have thousands of years of history literally sitting in their backyard but Rachel and Micha Noy of Moshav Zippori in the Lower Galilee certainly do.

Rachel, Micha and their six children were amongst the first to dig down and sift through the layers of soil to uncover some of the historic treasures discovered at this intriguing – and one of the most important – of archeological sites in Israel.

“My mother was horrified at the state of our home during one of her visits – she actually ended up cleaning our house because it was far more exciting for all of us to be cleaning the newly-discovered houses from Roman and Byzantine times just a few minutes walk away,” laughs Rachel who was born and brought up in Cardiff, South Wales and made aliyah in the late 1960’s.

Perched on a hill behind Rachel and Micha’s home is a formidable and extremely thick walled Crusader fortress which, at 290 meters above sea level affords a glorious view of the fertile valleys way down below. Reservoirs belonging to the National Water Carrier in Emek Beit Netofa glisten in the sunshine to the north, the Zippori stream and springs in the valley are on the other side and the outer neighborhoods of Nazareth climb sky high, strung across the mountain range looming in the near distance.

Rachel, the sifter of Zippori soil from the Welsh Valleys (who still retains a distinct Welsh accent, not only became enthused with the physical digging and amazing discoveries awaiting her on the hill behind her home, but also developed an insatiable appetite for knowledge of the different periods of history of her neighborhood.

The Crusader fortress was built over the remains of a much earlier structure. Here and there massive stones have been inserted in the corner areas – originally Roman sarcophagi. Intricate relief work in the stone remains intact, like that above the doorway to the two-storied building with a flat roof - the best observation platform in town.

A Bedouin woman friend of Rachel’s went to school in that very building, restored in the 18th century by the Bedouin ruler of the Galilee, Daher el-Omar. The Arab village once situated there was called Suffuriyyeh.

During the 1930s Arab revolt in Palestine and during the 1948 War of Independence the fortress was used by Arab marauders to constantly attack local Jewish communities.

Operation Dekel, carried out on the night of July 15, 1948 saw Suffuriyyeh conquered by Israeli soldiers, and the area was abandoned by the local Arabs. The present day moshav was established nearly a year later.

“The remains discovered here at Zippori are unbelievable and because there was a constant presence of peoples living here they were relatively well preserved – but we had to dig rather deep to find them,” quips Rachel. She and Micha grow tomato seeds, tend olive trees and nurture an impressive organic garden.

The eco-conscious family has also constructed an addition of their own, a large building situated on the  side of their house next to the Crusader fortress.

The unusual and innovative building was constructed from bales of hay covered in mud and glued together with egg whites. It houses a modern olive press as well as a small visitors’ center for folks interested in organic olive oil production and organic farming in general.

Rachel feels she is living a rich history on a daily basis. Zippori is a huge site adjacent to Rachel and Micha’s farmland, and today a 16-square kilometer National Park with seasonal archeological digs still well underway, it involves both Israeli and American archeologists and their teams.

So far the excavated areas have revealed flagstoned road systems, public and private buildings, amphitheater, market place, bathhouses, places of worship of both Jews and Christians and an impressive water system, but there are still many secrets waiting to be discovered under the hilly landscape.

There are a number of cemeteries in different parts of Zippori, once known as the capital of Galilee, and one of the tombs is said to be that of Rabbi Judah 11 – who was also known as Yudan ?? Nesiah, the grandson of the Patriarch Rabbi Judah Hanasi, redactor of the Mishna.

Findings at the site date  as far back as the first Temple and many of the late great names in history either spent time at or passed through Zippori – Zippor in Hebrew meaning bird as mentioned in the Babylonian Talmud with regard to the origin of the name. “Why is it called Zippori?” asks the Talmud and then has this reply, “Because it is perched on top of the mountain like a bird.”
The mosaics found in Zippori are breathtakingly beautiful. The most famous  of  all was found gracefully smiling up from the floor of the Dionysus house, a mansion discovered at the top of the hill close to the fortress. The lady became known as “the Mona Lisa of the Galilee” after visiting journalist at the time of the discovery exclaimed: “She is more beautiful than the Mona Lisa.” The Zippori Mona Lisa adorns the floor of the dining room, and is part of a large mosaic depicting life in the third century CE. The remains of the mosaics and walls of the mansion, apparently destroyed in an earthquake in 363 CE, lay under meters of rock and soil.

“Working on this part of the excavation was so exciting, especially when the first small piece of mosaic was discovered,” recalls Rachel. “Most moshav kids went off to summer camp but mine stayed home to discover their past and had a great deal of fun working alongside the students from different countries who participated in the digs.”

Moving along to view the mosaic from a different vantage point, Rachel points out a row of servants carrying fruit and vegetables and one holding onto a chicken. She worked on cleaning that part of the mosaic as inch by inch they were uncovered.

“It took me three days to clean a chicken,” she chuckles, adding quickly, “with a toothbrush mind you.”

A lovely mosaic floor boasting geometric and bird patterns was discovered at a building known as the Byzantine house. A synagogue, discovered as late as 1994 in the northern section of the sire ?? was built in the fifth century CE.  It contains a mosaic floor richly decorated with Jewish motifs such as a shofar, seven-branched candelabrum and biblical scenes.

Still struggling to absorb all the historical events Rachel had been enthusiastically describing, we took a stroll down the cardo (a main road laid by the Romans). So vivid is her description that one can almost hear the scraping of the wooden chariot wheels on the bumpy flagstones. She points to what she describes as “ancient graffiti,” children having scratched their brand of the game of hopscotch into the stone. Nearby more old-time graffiti, a scratched out seven-branched candelabrum still adorns a large cardo flagstone. Here and there deep gaps have been hewn diagonally across where the road slopes down.

“These days modern roads are purposely scraped or ‘scarred’ in dangerous places to stop skidding and basically what we see here is their version of the same thing,” explains Rachel.

East of the cardo we enter the Nile House – room after room of incredible mosaics depicting water, animals, humans and a mixture of both the latter in the form of a centaur half-man half beast who actually looks like a friendly fellow.

So extensive is Zippori that it all becomes overwhelming.  One begins to envy Rachel and Micha Noy and family being able to take a stroll down such a rich historical lane behind their house.

This is it a somewhat dusty open history book from which we can learn more. It also allows us to lend a hand in the continuing search for more artifacts from the peoples of the past who walked, cultivated and fought over this land.

THE RABBI’S DAUGHTER - A Review
Spotlight on .....Roz Brodie