A Learning Adventure in Appalachia 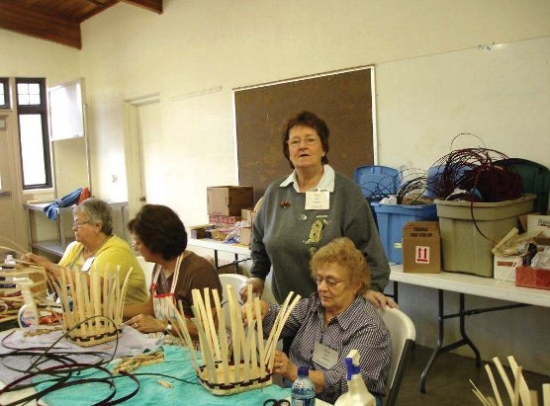 When I retired a year ago, people asked me: “What do you want to do now? Travel?” Of course the answer was “yes”. Since immigrating to Israel in the mid-80s, travel has usually meant going back to the US to visit family, and sightseeing was confined to the cities where they lived. For years I had dreamt of having a week at what might be called “sleep-away arts and crafts camp for adults” in North Carolina that I had read about on the Internet. Once we began investigating this possibility for the post-high holiday period, we realized it was too far from Chicago to easily arrange. Then I remembered Elderhostel, now known as Road Scholar, a nonprofit educational travel organization (www.roadscholar.org) that partners with various institutions and travel programs worldwide to offer learning vacations to seniors. There we found a five-day arts and crafts program in Ripley, West Virginia, one day’s car drive away. The price of about $500 per person was all inclusive, except for a small charge for supplies, and it was  it was about one half the cost of the other one.

Our program was under the aegis of the Cedar Lakes Crafts Center, part of a conference facility in Ripley owned by the state of West Virginia. From among the seven courses offered, I chose basket-weaving. I liked the idea of having something both decorative and useful to take home. My husband, Eli, graciously agreed to take up watercolor painting, even though he protested his lack of artistic ability. The other classes offered were quilting, stained glass, tinsmithing, woodworking and writing personal histories.

Meeting our fellow campers, whose ages ranged from the 50s to the 90s, turned out to be nearly as rewarding as learning the new crafts. For veteran American immigrants to Israel, it’s refreshing to encounter the kind of people we grew up with, to hear about their professional lives, their retirement activities and, of course, their attitude toward Israel. It was clear to us after the first night’s introductions that we were the only Jews among the 100 participants, but many we talked to were pro-Israel. Our request for vegetarian food was not only accommodated by the staff, but was honored with as much sincerity and goodwill as you could wish for.

When we arrived at our destination on Sunday afternoon, we were immediately captivated by the beautiful setting: a green bowl surrounded by forested hillsides, and at its center attractive ponds crisscrossed by footbridges. Various types of accommodations were spread around the perimeter of the campus, from rustic dormitories to a modern motel where our group stayed. The arts classrooms were conveniently located nearby and the dining hall a 10-minute stroll away, especially pleasant in the crisp morning air; roads and parking lots near the buildings made driving logical for those unable to walk.

Open seating in the dining hall gave us the opportunity to make new acquaintances or join those we’d previously met. The caliber of the people was what you might expect of those on such a program: former academics, professionals or craft lovers who enjoy traveling and learning new things. A few came from as far away as the New Jersey shore and St. Louis, Missouri, but the majority hailed from nearby states. One woman was an author and a pastor with a doctorate, who, with her husband, an old military man, made quilts for hospitalized veterans. They frequently travel around the US, often to Road Scholar programs, in a camper housing their cat and dog, and this time was no exception.

One family group included a couple of semi-retired librarians, the wife’s 91-year-old mother and her two equally aged siblings, plus one brother’s wife and middle-aged daughter. The mother, bent with osteoporosis, was my classmate and had remarkable endurance, never wilting during the three-hour after-lunch session. Her son-in-law was cordially solicitous of her, often asking, “Mother, how are you doing?”

The tinsmithing teacher was a member of an Amish-type sect, and he and his wife, in their traditional garb, pleasantly mixed in with the mostly jeans- and sweatshirt-wearing students. Two lovely women good-naturedly joined us a day late, having been mistakenly sent by their travel agent to Charleston, South Carolina, instead of Charleston, West Virginia. Many were repeat students who come back to Ripley season after season, year after year, to pursue the same or different craft studies. One of my classmates was an already experienced basket weaver whose basketry groups back home donate their products to their church’s fundraising sales. She encouraged and helped me when our teacher was unavailable.

Two evening programs were offered during the session: a lecture about coal-mining and unionizing, and the “Zucchini Pickers”, a bluegrass trio who delivered their banter in a radio show format. Instead of the Wednesday evening open-studio, when you could return to your classroom to work on your projects, we went AWOL to the local Walmart for some shopping.

And what did we learn in our classes? I learned how to prepare the reeds and weave four colorful baskets, two with wooden bases. Particularly tricky to master was trimming and attaching the rim, but once a project was complete I could hardly wait to tackle the next one. My helpful classmate suggested that once back home, I might do well to work from kits that come with all the materials needed, since buying materials for only a basket or two (especially in Israel) would be difficult. I have since ordered two via the Internet, that will be brought to me by friends visiting from the US. My enthusiasm also led me to seek and, happily, to find an experienced basket-weaving teacher in Israel, and we have organized a four-session course at the AACI in Tel Aviv.

Eli’s watercolor painting progress was stymied by his conviction that he couldn’t draw, yet he found a way to overcome this. His teacher agreed that he could trace pictures from magazines and color them in. The pictures have their own special charm and one is now framed on his desk.

Would we take another Road Scholar program? Absolutely! We’ve already picked out one for next May in New Hampshire, featuring classes in Emily Dickinson’s poetry and music appreciation, and a visit to a folk art museum. Did we make any lasting friendships? No. But we had some memorable encounters and felt we had effectively represented Israel in the American heartland.

Suzy Libenson grew up in Erie, Pennsylvania. She studied English and Journalism at the University of Michigan, Ann Arbor, where she met her husband, Eli. In 1984, they made aliyah with their three ...
More...