Applebaums: A life of giving

Speaking with Jack and Meira Applebaum is like living a piece of Israel’s history.  Recently celebrating the 50th anniversary of their aliyah – coming here shortly after the Six-Day War – their story is one of facing challenges combined with a life of giving.

Originating from the city of Pittsburg in the US, Jack was immersed in an electronics business started by his father.  Meira was heavily involved with the local Jewish community as president of their synagogue’s Sisterhood, organizing the Sunday school Hebrew classes and as a supporter of Israel Bonds.

Meira’s membership in Naamat was the catalyst for their first visit to Israel, in 1963, on a Naamat Mission.  They left their four children at home and toured the fledgling state from north to south. It was this initial trip that proved to be a life-changing experience. Among those they met was Rachel Ben-Zvi, the wife of Israel’s second President, who first placed the concept of aliyah into the minds of this young couple.

Life returned to normal once home in Pittsburg, until one night, a year later, Jack woke up and realized he had lost the sight of one eye.  This unfortunate happening was the catalyst for deciding to take a sabbatical in Israel.  Jack, smilingly said, that a sabbatical is normally reserved for academics, but in this case, he decided he qualified.  Jack and Meira, together with their four young children chose to travel to Israel by sea.  The journey took 16 days but proved to be a most meaningful and exciting way to arrive in Israel. 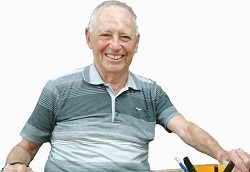 The Applebaum family then set about deciding where to live and chose to rent a house in Tzahala across the way from Yitzhak Rabin and his family.  Their neighbors included other well-known IDF personnel, among them Moshe Dayan and Arik Sharon.

It was during this year that Jack was invited to meet a group of entrepreneurs involved in the world of electronics including the heads of IBM in Israel and Tadir (later to become Tadiran).  This was the start of Jack’s business here, primarily selling electronic parts for distribution.

The year passed and the family returned to Pittsburg and resumed their American life.

Fast forward three years to June 1967 and once again Jack and Meira had the urge to come to Israel.  They were on the first civilian aircraft to land in Tel Aviv following the Six-Day War. This time the plan was to rent a house in Tzahala and stay for three months – the duration of their children’s school vacation.  Towards the end of the period, Meira announced: “We’re not going back; we’re staying here.” To say this was a shock to the family back in Pittsburg, especially Jack’s father, is a gross understatement.

The Applebaums loved Tzahala and chose this city to build their new house.  The actual construction seemed to go on forever, possibly, Meira said, because the Russian roofer required bottles of vodka to keep him going.

Jack’s company “Rapac” (Radio Parts Company), named after his father’s original business, continued to prosper.  For Jack, it was important to keep his father’s input alive.  He recalled how his father had lost his job during the depression, ending up as a peddler, but then turned this modest beginning into a successful company with 20 outlets in three states.

Meira, whose profession in the US was teaching gifted children, worried about her children and other children from English-speaking backgrounds who were skipping the school’s English lessons because they were too simple.  She spoke with the school’s head, who suggested that Meira run a class specifically for these children. It proved to be such a success that when the school’s head of English left, Meira was offered and accepted the position.

In 1970, she noticed an advert from the prestigious Tel Aviv Gretz Elementary School seeking a teacher for gifted children. Meira applied and was chosen to teach these children, aged 7 – 12 years. She developed a special program that ran for 10 years.

Thirty years later, while having coffee with Jack in a Kfar Saba café, a fellow came up to her and said “I am one of the pupils you taught in Tel Aviv 30 years ago.”  Following this chance meeting he, together with other “Meira graduates”, gave her a wonderful “thank you” party.

Aside from her professional teaching career, Meira continued with her volunteer work and became the President of Naamat in Tzahala – a branch that won awards for being the best volunteer organization in the city.

In the 1980s, when the aliyah began to flow from the Former Soviet Union, Meira discovered ESRA and met and was impressed with Merle Guttmann, ESRA’s dynamic Founder, Hon. Life President and editor of this great ESRAmagazine.  Meira wanted to help in the integration of Russian immigrants based in Neve Sharet, a suburb of Tel Aviv.  ESRA rented an apartment from Wizo and Meira turned it into a boutique Shop. Initially she was confronted with resistance from one of the tenants in the block. However, when Meira invited this lady to help sell the goods, she, plus another five Russian locals became the mainstay of this successful project. Aside from benefitting ESRA, it also benefited these salesladies, whose self-worth and sense of satisfaction increased – the essence of what ESRA’s volunteerism is about.

At this time, Jack’s business was growing and he required his wife’s help. Meira divided her day between running the shop in the mornings and assisting Jack in the afternoons by producing catalogues for the company, organizing participation in electronic exhibitions and designing and setting up the Rapac stand.

By 1995, Rapac had evolved into a public company and the president of the company suggested that Jack retire.

The children had left home and were married with children of their own, leaving Meira and Jack alone in their house.

A new city, Kochav Yair, was in the process of being founded with lots available for the building of 600 homes.  The Applebaum children decided it was a good idea to purchase ground to build homes for their respective families and suggested their parents did likewise, which is how Meira and Jack built their second home in Kochav Yair living close to their four children and 12 grandchildren.

An industrial zone was being created nearby in Tzur Yigal, where the Applebaums' sons built a commercial center to rent out to various companies; a successful project with various electronic companies renting the Applebaum space.  The boys invited their dad to return to work, an invitation that Jack was delighted to accept. Until today, Jack works three days a week in the family office.

Meira became increasingly involved with ESRA.  She produced two superb ESRA cookbooks and was involved with the very first ESRA Calendar that came into being four years ago.  What has given this couple the most joy and satisfaction is the ESRA project they initiated, and have been involved with ever since - helping gifted children from deprived backgrounds to fulfil their potential.

It started 20 years ago at the Weizmann Institute when the Applebaums sponsored 12 gifted children’s participation in the Weizmann Institute’s Science for Youth project.  These bright pupils, from challenging backgrounds, were bused to Rehovot from Yavne enjoying a unique and exciting learning experience. In exchange for this, they had to share what they had learnt with their classmates who had not participated – part of the “giving back” deal that Meira and Jack considered to be important.  The project ended in 2007, when Weizmann decided to close down its youth department.

While the Weizmann project ended, it was the beginning of the Applebaums’ commitment to ensuring that other youngsters would be given similar opportunities.  There followed a two year project at the Wingate Institute.

In 2009 Nina Zuck, Chair of ESRA’s community projects, approached the Marine Biology College in Mikhmoret proposing a Gifted Children’s course at the institute. Since then, Jack and Meira have been partners with ESRA in enabling children from challenging backgrounds but with potential, to learn, absorb and enjoy all aspects of marine biology. These youngsters are recommended by the heads of their respective schools with a number coming from an Ethiopian background. Meira and Jack are thrilled to see the amazing difference this project is making to these fortunate participants.  It is a combination of acquiring knowledge, enjoyment and, most important of all, an evolving self-confidence that turns these youngsters into contributing members of Israeli society. Meira asks, “Can there be a greater or more meaningful gift with which to be associated?.”

Today, Jack and Meira live in Protea Village. Meira is as busy as ever producing the Village Magazine and actively participating in the English Drama Group to entertain the residents, as well as others around the country.

For me, it was a great privilege to have sat with this very special couple and to have learnt about their challenges and their amazing achievements.  At the end of a fascinating two hours, I asked them what impact the past 50 years of living here has made on their lives.  As one, they answered, “We have a rich life. We made the right move. We have been blessed to see our children and grandchildren develop with an overriding love and appreciation for this one Jewish state.  Whatever we have given, we have gained so much more.” 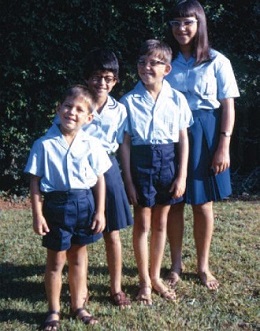 The Applebaum children when they were young

The day Jerusalem was ours again I was sobbing in a car with $125,000 in a paper bag next to me. I’d collected the money by selling Israel Bonds to neighbors.

There are some moments in a person’s life which stay fixed in one’s memory forever. the day Israel’s troops reached the Wailing Wall is one of them. I was driving into the city of Pittsburg, Pa. U.S. I was headed for the Israel Bond office. Next to me was a brown paper bag containing $125,000 dollars in cash. When the Six-Day War broke out, I had knocked on every Jewish door in my neighborhood selling Israel Bonds. I would not take no for an answer. Israel was at war and they needed money NoW. I asked for cash and I got it! I don’t remember who else gave me so much money from our family but I had a feeling that this cash was money for emergencies. Now was an emergency. I drove into a parking lot in the city. the radio was on and I heard the exact moment when we reached the Wall and all of Jerusalem was ours again. I heard the blast of the shofar and I began to sob. Suddenly I realized where I was and how this must look …. a young woman sobbing holding a bag of cash next to her! I left the car, bag in hand, and ran to the Israel Bond office. there was bedlam there. They too had been listening to the radio. At least I had the Jewish family with whom to celebrate. We sobbed together; we danced the hora and screamed with joy. Jerusalem – the Wall was in our hands. In four weeks’ time, I would be standing before that Wall in Jerusalem. We made aliyah immediately after the Six-Day War. We were the first American family to do so. There was never a doubt in my mind that we belonged here.