An Enchanting Evening of Music

A Holocaust survivor whose memories of hunger remained with her throughout her life, passed on these feelings to her grandson Gil Shohat, the eminent conductor, composer and pianist. This year marked the 11th consecutive year that Shohat performed in aid of ESRA’s much needed Hand-in-Hand Pantry Fund.

Shohat, who generously sponsors his own performance, shared with his audience that, as a child, his late Polish grandmother would always insist he finished the food on his plate, because of her own childhood memories of painful hunger.

An audience of some 200 listened, captivated, to the maestro as he played Debussy, Rachmaninoff and Mozart.  He then volunteered to play any request. The response - which came fast and furious - included music as diverse as Gershwin’s Rhapsody in Blue, Beethoven’s Emperor Concerto and Grieg’s Piano Concerto.  The Maestro obliged magnificently, devoid of a single sheet of music, enchanting his audience with his masterful interpretation of each piece, and quipping that he could only manage one movement of the Grieg Concerto, otherwise all would be sitting in their seats until way past midnight. 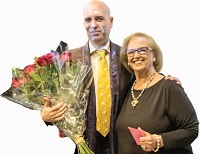 Hand-in-Hand Pantry Fund committee member Shiphra Davis, reminded the audience that these concerts came about when Rika Meyerowitz, an ESRA colleague, asked Nelly Perry (a successful fundraiser while living in the UK), whether she would be prepared to organize an event for families in need of food.  Nelly agreed and from that day onwards became the prime mover and shaker of the, now annual Gil Shohat recital.  As a direct result, every six -weeks throughout the year, 50 parcels are dispensed to 50 needy families and this Pesach 100 parcels were dispatched to 100 families. None of this would be possible without this highly popular event.

Nelly expressed appreciation to Gil for his amazing generosity as well as to the Sharon Hotel. She thanked the committee and in particular Shiphra, Rika Meyerowitz, Angela Jenshil and Mike Altman.

ESRA expresses its admiration of and its indebtedness to Nelly.

A Bit of Humor
Students say thank-you
Praise for ESRAmagazine