Sonya Stern, an attractive young woman from Zurich, came to Sderot after Operation Pillar of Defense, as she wanted to help people cope with the trauma suffered then and for many years previously.

She has had seven years of experience as a therapist. Her method combines reflexology, acupuncture, Reiki, Feng Shui, massage and other methods. She suits each treatment to the needs of the individual adult or child.

I interviewed Sonya before she left Israel after having spent six weeks in Sderot. She felt she could have done more; people were warm and welcoming, and even when she didn’t treat them they were comforted by her desire to help.

Here are some examples of how positive Sonya’s 'guidance to healing' was:

Gali, a member of the local urban kibbutz arranged for Sonya to work with families in Sderot and in Beersheba.

A group of families from the urban kibbutz took advantage of the Chanukah holiday to participate in activities with Sonya.

The event was called From Darkness to Light. Children from kindergarten and elementary school and their parents took part in a series of movements - shaking, dancing, tickling each other and relaxing to the pleasant background music. After this positive experience, Gali asked Sonya to treat her work colleagues in Beersheba.

Gali, who has lived in Sderot for years, explained that it is not pleasant to admit, but the residents of Sderot have gotten used to the situation and are not  as upset by the Red Light sirens as the people in Beersheba who, for the first time, bore (along with the residents of Ashkelon ) the brunt of the Grad rockets. So when Sonya went to treat Gali's colleagues in Beersheba they felt they had been given a prize. Sonya used one of the offices of the Shatil organization (funded by the New Israel Fund) as a treatment room, and six of the office staff, one after the other, had a chance to relax in quiet under Sonya's care. 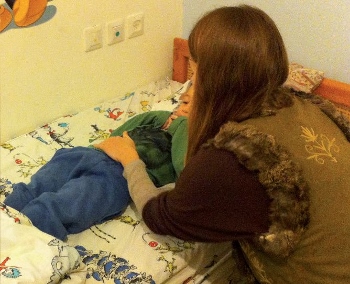 In Sderot, children who wouldn’t go anywhere alone or had trouble falling asleep, were treated by Sonya in their own homes. Within 20 minutes of treatment they were asleep.

I will conclude with the words of the 10-year-old daughter of Oxana:  "Sonya has such good and pleasant hands and she is so sweet.”

She helped me relax too every time she came to our apartment, and I want to thank her so much for coming at such a time. Sonya, it was a privilege to meet you.

Adele Rubin came to Israel in 1951 from Cape Town South Africa after completing a first degree at Cape Town University. Upon marriage to Mike, she left Jerusalem for Tel Aviv. She has 2 children and ...
More...