Memories That Won’t Go Away - A Book Review 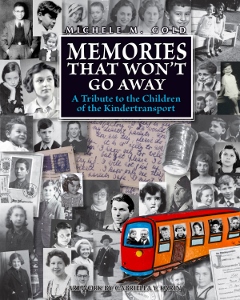 Memories That Won’t Go Away: A Tribute to the Children of the Kindertransport
By Michele M. Gold. Artwork by Gabriella Karin
Kotarim International Publishing, 2014
Paperback, 291 pages. $35 - NIS 135.
Available from major online bookstores including Amazon and Barnes and Noble.
To order books in Israel, contact: mgkindertransport@covad.net

As we all know, life changed drastically for the Jews of Germany on January 30, 1933, when Adolf Hitler became Chancellor. Jubilant Nazis marched through the streets of Berlin, and SA storm troopers held celebratory torchlight rallies throughout the country, assaulting political opponents and beating up Jews. Four weeks later, the Nazis blamed the Jews for an arson attack on the Reichstag.

Harassment of Jews continued slowly but surely throughout 1934, spiking with the passage and enforcement of the infamous Nuremburg Laws of 1935, driving Jews from most professions, removing many of their legal and civil rights, and severely restricting their interactions with “Aryan” Germans. Prohibited interactions with non-Jews consisted of everything from intermarriage to use of public parks.

Anti-Jewish laws and measures continued on to the final months of 1938 when, on November 7, Ernst vom Rath, third secretary at the German embassy in Paris, was shot by Herschel Grynszpan, a young Polish Jew whose parents had recently been deported from Germany. The Nazis organized riots throughout Germany two days later in which SA and SS men—disguised as “outraged citizens”—set fire to more than 1,000 synagogues, destroyed some 7,500 Jewish-owned businesses, and fatally assaulted almost 100 Jewish people. Security police commander Reinhardt Heydrich authorized the mass arrest of Jewish men, 30,000 of whom were soon herded into concentration camps.

The ever-worsening situation of the Jews in Germany, culminating in the November 9 pogroms that the Germans began calling “Kristallnacht”, began to arouse concern in Europe and the United States. President Franklin Roosevelt expressed his shock and recalled the U.S. ambassador from Berlin. Prime Minister Neville Chamberlain received a delegation of prominent British Jews on November 15, including Viscount Samuel, Lord Bearsted, Chief Rabbi Dr. J. H. Hertz, and Zionist leader Dr. Chaim Weizmann. Among the matters discussed at this meeting was a request to temporarily admit and care for imperiled, unaccompanied Jewish children and teenagers. Two weeks later, on December 1, 1938, the first train departed from Berlin with 200 children. Passing through Germany and the Netherlands, it arrived at the Hook of Holland, where the children departed by ferry to England. This program of rescue, soon known as the “Kindertransport”, quickly expanded to include children from German-occupied Austria, Czechoslovakia, and eventually Poland. Working right up until the outbreak of World War II on September 1, the Kindertransport ultimately save some 10,000 children between the ages of two and seventeen.

Researching the stories and subsequent lives of hundreds of these children, Michele M. Gold has provided us with Memories That Won’t Go Away: A Tribute to the Children of the Kindertransport, an impressive and sorely-needed document on this fascinating chapter in the history of the Holocaust. Gold’s book evolved from a 2011 exhibition at the Los Angeles Museum of the Holocaust, in which Holocaust survivor Gabriella Y. Karin created a ceramic train sculpture in tribute to the children of the Kindertransport. British-born Gold, a volunteer educator at the museum, collected information and photographs about the child refugees and inserted their pictures into each of the carved-out ceramic windows of the 64 trains.

“After the success of the exhibition,” says Gold in the book’s introduction, “I reflected more deeply on my mother’s journey to safety on a Kindertransport train out of Leipzig, Germany, and the terrible fate of my natural grandparents. I was inspired to document more fully the stories of the actual people symbolized in Gabriella’s train sculptures, to create this keepsake for our future generations.” The resulting keepsake is this 300-page book that expands on the concept of the exhibition, using the trains as book chapters to tell the stories of some 600 children. We see their pictures and their biographies—some very brief, others as much as three pages long, with stories, photos and illustrations.

Each of these stories documents a life that was saved. Some of the stories are gripping, relating how quickly and at times violently the children’s lives changed under Hitler, with memories of gentile neighbors suddenly shunning them, friends and schoolmates forsaking them, and of having to leave school entirely in the middle of a term. We read of family members being arrested and taken away, of family businesses being smashed, and of synagogues being set on fire. Most compellingly, we read stories of families being torn apart as frightened, tearful children embraced their parents one last time before boarding a Kindertransport train, many never to see those parents alive again.

The train-by-train narrative ends with “The Train that Didn’t Leave”. This was a train loaded with 250 children at Wilson Station in Prague, waiting to depart for England. The train sat waiting at that station on September 1, 1939, while the Germans invaded Poland and began the Second World War. The train ultimately pulled out of Wilson Station, its destination—and the fate of its 250 young passengers—unknown to this day. There were no more trains to safety after that.

William Faulkner once said of Ernest Hemingway: “He has never been known to use a word that might send a reader to the dictionary.” Said Hemingway in response: “Poor Faulkner. Does he really think big emotions come from big words?” Memories That Won’t Go Away isn’t likely to send anyone to the dictionary either, author Gold and editor Marian Lebor evidently having decided that big emotions do not need big words. The book is written in clear, simple English, comprehensible both to young readers and to those for whom English is a second language.

An earlier book published in 2000, entitled Into the Arms of Strangers: Stories of the Kindertransport by Mark Jonathan Harris and Deborah Oppenheimer (London: Bloomsbury) provides a deeper and more scholarly account of the Kindertransport, with both a broader perspective and a bit of historical background on the Jews of Germany in the 19th and 20th centuries. It too is extensively illustrated and provides numerous stories of and by some of the children and their rescuers. Gold, writing at a somewhat lower level and avoiding the occasionally academic style chosen by Harris and Oppenheimer, makes Memories That Won’t Go Away accessible to a broader audience. That, and the cartoonish artwork by Gabriella Karin, makes the book more appealing to a specifically younger audience as well.

Memories That Won’t Go Away will doubtless be an invaluable resource for anyone teaching the Holocaust to junior and senior high school students. In that regard, it should serve as a primary textbook in school curricula, classrooms, and libraries. And, as a companion volume to the earlier book by Harris and Oppenheimer, it is destined to become a definitive document of the Kinderstransport.

Carl Hoffman grew up in Boston and was educated in New York and Philadelphia. He holds a Ph.D. degree in Anthropology from the University of Pennsylvania, and has lived among headhunting groups in ...
More...