Students Pride in Being Israeli

An Ethiopian Village near Kiryat Gat… who knew?!

This was the destination of four busloads of some 150 schoolchildren and their 39 student/mentors from four areas in Netanya, where ESRA's flagship project – Students Build a Community* – is in its 11th stunningly successful year.

A sign at the entrance announces the official name of the village – Atachlit Beta Israel. No one actually lives here. It is used as a workshop venue, aimed at providing a hands-on experience of various aspects of Jewish Ethiopian traditions, culture, stories about their journey to Israel, and life in “the old country”. Walking down a dusty path sprinkled with a few Gojos – round mud huts with straw roofs, it almost felt as though we'd been transported to another world. The day's oppressive heat added to the authenticity of the experience – no air conditioning here! 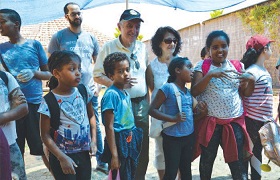 Everyone gets involved, including ESRA Chairman Baruch Tanaman and wife Mimi

First on the agenda was a gathering of everyone together in a large covered pavilion. The children sat on straw mats and listened to a woman in traditional Ethiopian dress, who shared her experiences of leaving Ethiopia at age eight, walking for weeks to Sudan where she and her family spent two years, until they finally got to Israel. She also extended typical Ethiopian hospitality by distributing to everyone pieces of the three huge loaves of bread – Dabo, which tasted almost like cake, and a glass of traditional Buna coffee.

From here the children attended a series of workshops in smaller groups, in the round Gojo huts, rotating every half hour till everyone had experienced it all. One workshop was on Ethiopian dancing. Traditional fabrics were distributed, music turned on, and the children, wrapped in their ethnic shawls, delighted in dancing and trying out the typical Ethiopian shoulder movements.

Meanwhile, another group was learning how their ancestors built their homes. A mixture of dirt, sand, straw, and water was gleefully taken by the handful into the nearby unfinished hut where the children were instructed as to how to spread the mud effectively on the hut's wooden frame.

Back in the pavilion, another Ethiopian woman gave out clay to children seated at a long table. She demonstrated how to soften and mold it into a dish or cup. She explained that in Ethiopia, the government offered families free land to grow their own food and support their growing families, but there was one condition. They had to convert to Christianity. Although free land was a tempting offer, the Jewish families said "no thank you" and decided to find other ways to support themselves. That was how the Jewish Ethiopians became known to their non-Jewish neighbors as the best source for ceramic ware, fabrics and clothing. 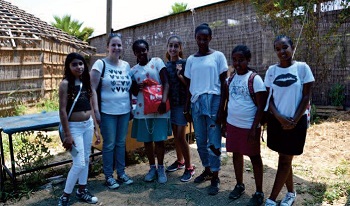 In the last hut I listened in as a young Israeli woman from Ethiopia told stories of family life and how the home was organized. When their grandfather rose in the morning and entered the main room, she said, everyone, including all the children, stopped what they were doing and rose to their feet in respect, standing in silence while they listened to him say the morning prayers. “We may not have brought professors and doctors,” she told them, “but we brought values - a trust in surviving while doing the right thing, adherence to one's beliefs, respect for your elders.”

The experience was completed with an authentic Ethiopian lunch – the traditional injera flat bread, salads, lentils… oh yes, and ice-lollies!

In addition to the students and schoolchildren, the event was attended by the ESRA chairman, project managers and office staff.

Anyone who would like to attend such an event is welcome to do so. In fact, I recommend it. It's an opportunity to feel pride in what we are doing.

We all left with a taste of Ethiopia, and the children left with a better understanding and appreciation of where their parents came from.

* For the uninitiated, Students Build a Community is a project that allows financially stressed college students to complete their studies by providing them with free housing in difficult neighborhoods in Netanya. In exchange, the students commit to taking four of the neighborhood's schoolchildren under their wing and tutoring them for six hours a week. The majority, but not all, of the students and schoolchildren are from Ethiopian backgrounds. In partnership with the Netanya Municipality, the project has literally transformed whole communities.