To draw or not to draw? Playing trumps wisely… 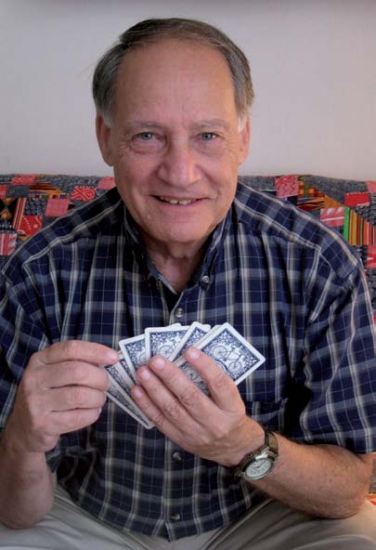 There is an old adage about children running around without shoes because their parents forgot to draw trumps.  In general, when playing a trump contract, you want to clear the opponents’ hands of low trump cards lest they use them to ruff your high-card winners in the side suits. However, there are many hands that arise at the bridge table where it is necessary to hold off, or even refrain from drawing trumps.

Consider the following hand where you, as South, are declarer in 4 spades after an uncontested auction.  West leads the 2§ which you win with the A♣ in your hand. How do you continue?

Looking at your hand and assuming a normal 3-2 spade break, you can see 5 potential losers: a spade, three hearts and a diamond. You can park your losing diamond on the K§ but in order to make the contract, you have no alternative but to get rid of your third heart loser by trumping it in dummy. In order to be in a postion to do so, you have to give up the lead twice in hearts. You cannot afford to play even one round of trumps yourself because the defenders will continue trumps when they get in with the hearts, leaving you without the vital trump in dummy.  So, at trick two, play a heart immediately, win the return and then play a second round of hearts. The Q§ provides you the entry to your hand to trump a heart. Only now should you draw 2 rounds of spades, ending in dummy and discard your diamond loser on the K§. It doesn’t matter if the opponents can ruff the club with their winning spade. Your contract is home.

In the next hand, you are declarer in 6 diamonds. You receive the lead of Q♥. Can you bring home the small slam?

In order to do so, you must trump two spade losers in dummy - the third spade loser can be discarded fed on dummy’s K©.  After winning the heart lead, play a spade to your Aª, then ruff a small spade in dummy with the 9¨ (don’t take the chance of  an overruff by playing a small diamond).  Now play a small diamond to your hand. If it is allowed to win, do not continue trumps lest the clever opponent wins and plays a third trump, killing dummy’s ruffing potential. After ruffing another small spade with dummy’s 10¨, you can clear any outstanding trumps, making the final four tricks with the A§, K§, K© and K♠.

In the third hand, you receive the Q§ lead against your 4 spade contract.  You win with the A♣ in your hand.

In order to bring home this contract, you must plan to ruff two clubs in dummy. You must, however, draw two rounds of trumps so that the opponents do not make their high trumps separately. How do you go about drawing two, and only two, rounds of trumps? At trick two, play a small spade from both hands. Win the return, draw a round of trumps with the A♠, play the K© and then go about ruffing the clubs. It doesn’t matter if the opponents over-ruff with the last outstanding trump; your contract is safe and you make an overtrick if the heart finesse is on.

Finally, in the last example, as declarer in 4 spades, you receive the lead of the 6♠. You play low from dummy and win East’s 10♠ with your K♠. What next?

You think to yourself: This one is easy. I have three heart losers and two club losers. I can avoid one heart loser by ruffing my third heart in dummy. I can possibly avoid a club loser by finessing West for the Q§ and, if that fails, I still have a chance clubs will break 3-3.

Pity. A makeable contract has flown out of the window. This is one of those strange hands that if you had been declarer with the North hand rather than the South hand, you would have made the contract fairly easily. Looking from the perspective of the North hand, North has two heart losers, two diamond losers and one club loser, but can avoid the two diamond losers by ruffing them in the South hand.

What you have to do, therefore, is to play the hand using the technique of “dummy reversal”.

Don’t touch trumps and don’t let the opponents in to do so. At trick 2, play a diamond to dummy’s K¨, cash dummy’s A¨ and ruff a third round of diamonds in your hand. Back to the table with the K§, lead a fourth round of diamonds, ruffing again in your hand. You have now taken seven tricks and you still have three high spades in dummy! Contract made.