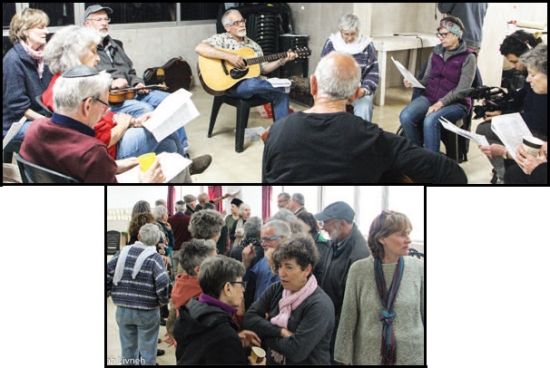 Top: Enjoying each other's company ... no better way than singing together
Bottom: At a meeting of the group, discussing important issues

“I’ve always wanted to retire side by side with friends; to be part of a community of like-minded people,” says Ilana Kraus from Kfar Saba, who is in her late 60s. Ilana and her husband Baruch have joined the first group in Israel that is attempting to set up a co-housing community for seniors. The aim is to create a cooperative living space for older people so that they can avoid the isolation and loneliness which the elderly often face.

It may surprise you to learn that loneliness is up there with obesity, smoking and pollution as a significant factor negatively affecting health. Or maybe it won’t surprise you, since so many people, particularly the elderly, experience loneliness. According to Dr. Shiri Daniels, professional director of ERAN, the Israeli emotional first aid organization, “Loneliness is the disease of our time.”

That is mainly due to the way people live today: a rise in one-person households, declining participation in community groups and team sports, and advances in technology that allow us to shop and do so many other things at home, thus by-passing human contact. With the loss of a mate and with children living far away, many older people report, sadly, that a pet or TV is their main source of company.

Israel, you would think, which is so small that it’s hard to live very far from children and friends, would be exempt, but that isn’t the case. ERAN statistics indicate that of their nearly 200,000 calls for help in 2017, the largest percentage (21.6%) were because of loneliness.

So, make friends, urge many researchers. Companionship provides the emotional support and human contact that we all need to keep us happier, healthier and less lonely. Easier said than done. When old friends are dying or moving away, it’s hard to replace them.

One innovative solution is a movement called “Co-Housing”, a system of cooperative living groups in which members are independent, but still part of a community. Such groups were started in the 1960s in Scandinavia and are currently operative in many countries, including the United States. Now, the concept has come to Israel as well.

“Community is the opposite of loneliness”, says David Mencher, one of the local organizers. He is part of a core group which decided five years ago that now was the time to go ahead with plans for an Israeli co-housing project, similar to ones that have been established in Europe, Canada and the US, but adapted to Israeli conditions.

The idea is that each participant, or couple, will purchase or rent a small private apartment (which will include a kitchen) in a building that will also have common amenities where people can meet, such as a place for social activities, dining room, kitchen, library, and so on. People can be as private or as social as they want; the point is they will share a caring community. They will all have independent incomes and private lives, but neighbors will collaboratively plan and manage community activities and shared spaces. Community activities will include some shared meals, meetings, and events. Unlike a traditional retirement home or assisted living facility, co-housing is non-profit, and therefore not as expensive.

The group’s mission statement, which was hashed out in discussions by members, defines the community as inspired by Israel innovations in community-building, including kibbutz, moshav and new models of urban living, to create a new kind of intentional community. It supports principles of equality, inclusion, tolerance and mutual support. Many, but not all of the participants, came on aliyah from English-speaking countries and have been in Israel for many years, although native Israelis, “Anglos” and others are also welcome.

Ilana and Baruch Kraus, from Kfar Saba, are among the group members. “The idea of being with other people and sharing activities drew me to it,” says Ilana. Along with the other members, the Krauses have paid 10,000 shekels as a sign of their commitment, with the funds going to expenses such as legal fees.

So far, so good, but achieving something so new and experimental has been challenging, which is why, five years on, in spite of an active core of some 35 members who meet regularly and have formed working committees, the community still exists only on paper. “We are pioneers,” says Ilana. “It’s not easy.”

One of the first issues to be decided is where to locate the apartment building that will house them. “Site is key,” Ilana stresses. “It’s all about location, location, location, but you have to adapt to real estate realities.” They are all agreed that the site must be in an urban area and near cultural and commercial amenities, public transport and medical services. But which urban area? The group has now hired a firm who will seek out suitable premises. Recently, the association became the first cooperative housing society in decades to be recognized by the Justice Ministry’s registry of associations.

There are other questions as well: will the members have meals together, and if so, how often? Will pets be allowed? What about Shabbat observance? How large will the apartments be? How active does involvement have to be? All these issues are discussed at monthly meetings at which the character of the community is being developed on a consensus basis.

The group welcomes new members and invites those interested to attend meetings and see for themselves if co-housing is for them.

Lorraine Laby
2019-04-14
Hi. I just read the article you included in your magazine about co-housing. I am part of that group and it was fun to see it being publicized by you all.
hannah gerber
2019-09-17
co housing is for me! wanting to move to israel and this is the sort of life situation i dream of!