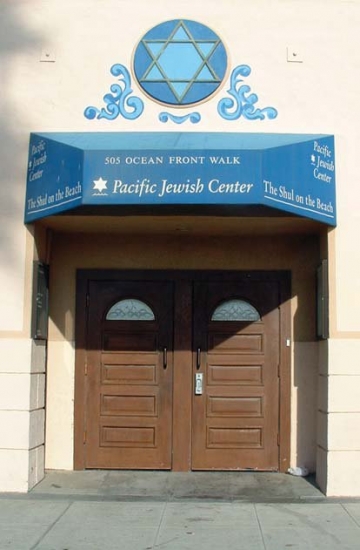 The Shul on the Beach – Pacific Jewish Center.

One doesn’t normally expect to see a synagogue wedged in between tattoo parlors and shops selling t-shirts advertising the virtues of a more than trendy and off the wall beach scene – but as I recently discovered in California, anything goes.

Strolling down Venice Beach is mind-boggling. Trying to take in the collection of weird and wonderful – and even weirder and not so wonderful – preachers and Hyde Park Corner type soap-boxers, jugglers, fire-eaters, rappers, belly and break dancing folks, pavement artists and more, is truly an amazing experience.

There’s even a nice Jewish boy juggling three hefty in operation chainsaws – wonder how his mother explains what her son does for a living. Probably says he is in marketing for Black and Decker!

Venice Beach does seem to be a collecting point for outrageous people and a true mecca for street performers who are never short of large crowds to watch them strut their stuff and hopefully throw a few dollars their way.

While slowly walking the walk and appraising the colorful scenes all around a large blue Magen David suddenly seemed to rise above the heads of the jostling crowds on the boardwalk in front of me. The Magen David sits in a circle of deeper blue, some fancy pattern work on either side of the lower portion. The building is painted light pink and with the sun shining on the building the Magen David is absolutely glowing.

As the crowd thins out and the surfboard-toting wide-shouldered young man in front of me pulls to the side, a royal blue canopy above dark heavy wooden doors came into view under the ‘Jewish star’ as some of my non-Jewish friends call the Magen David. The closer I get the more in focus the white lettering on the canopy becomes and I am more than a little knocked back when I read ‘Pacific Jewish Center, The Shul on the Beach.’

The doors were locked and although I am not normally a frequenter of synagogues I really did want to have a peek inside this unique and quaint looking house of worship slap bang in the middle of an area where the most adhered-to religion seemed to be the 3 S’s – sun, sea and the other.

Approaching a forty-something over the top tanned local sitting on a foldup chair in the vicinity I ask about the synagogue. Squinting into the sun he spots the Magen David around my neck, makes a crack about my British accent which really goes down well with me – and said I should come back on Shabbat.

Apparently the synagogue has been around for 60 years and in the past was one of a number of shuls that serviced the needs of a thriving community of Jewish folk who had come to settle in Venice Beach which was founded just over 100 years ago by Abbot Kinney, a tobacco millionaire.

Built on an area of marshes close to the shore, Kinney dug several miles of canals to drain off the excess water – a story this Israeli traveler quickly warmed up to.

Originally named Venice of America, Kinney had built Disneyland by the sea long before Walt Disney built his fantasy park. A Kinney built massive pleasure pier jutted out across the Pacific and a host of other attractions brought in tourists from near and far to ride on the pleasure town's miniature railway or float along the canals in a gondola – like the real McCoy in Italy.

Jewish businessmen were attracted to the town, but by the 1970s the community had dwindled drastically.

Rabbi Daniel Lapin and Michael Medved put in to motion a revitalization campaign that successfully attracted large numbers of unaffiliated young Jewish singles and families who lived in the area. The younger folk came together with a small group of elderly Venice Beach Jews struggling to keep their beachfront parlor of prayer open, thus saving the historic shul from going the way of so many others – to the auctioneer’s block.

In recent times the synagogue has undergone a serious renovation program and the car park facility at the back of the property turned into a patio garden where these days Shabbat Kiddush and community smachot are held in the Californian sunshine.

Another property owned by the congregation can be found within a few blocks of the ‘Shul on the Beach.’ The second building serves as a Beit Midrash as well as the site of the offices of the Pacific Jewish Center, a unique community on the Venice shores.

Further down the boardwalk is the JFS, the Israel Levin Senior Center of Jewish Family Service. The whole building is covered with an eye-catching mural called “Chagall Comes Back to Venice Beach,” a huge red dreidel (spinning top) stretched over a corner would have been just the right size for baby Goliath to play with.

The 1978 film The Big Fix featured the Israel Levin Senior Center in scenes where a private detective – played by Richard Dreyfuss – visited his aunt, a radical communist. In “Falling Down,” a 1993 film starring Michael Douglas and Barbara Hershey the ‘Chagall’ mural of the senior meeting place was also featured.

A small section of the Senior Center mural is obliterated by a stack of bicycles and surfboards for hire – I wonder if the elderly neighbors get a discount? – and a few blocks down a tattoo parlor offers not only so-called body decorations but also a large selection of metal studs and nails one would more likely expect to find at an iron monger.

In another shop I spot a box full of small silver ‘medallions’ to hang around ones neck. The box is labeled in English ‘Kabbalah Amulets – to Heal, Help and Protect.’ The inscriptions unreadable being as they are in Aramaic.

A not so young but extremely skimpily dressed woman standing next to me cradles a pint-sized dog in one arm and begins sorting through the Kabbalah Amulets.

She chooses one with something similar to a Magen David etched in the middle, a collection of squiggles all around the corners, pays the assistant and promptly attaches her new purchase to the dog’s collar.

James
2019-07-16
Strolling down Venice Beach is mind-boggling. Trying to take in the collection of weird and wonderful – and even weirder and not so wonderful – preachers and Hyde Park Corner type soap-boxers, jugglers, fire-eaters, rappers, belly and break dancing folks, pavement artists and more, is truly an amazing experience.

The Bereavement & Loss Program
Thank You Eddie
Save One Life, Save A World
Odeon Oscar
The Jewish Connection
ellis island