Rabbi Groundland was my brother-in-law and it has taken me a while to sit down and write his obituary because of the 101 things I could say about him. Since his burial on the Mount of Olives, I haven’t been able to gather my thoughts as to which of his many fine

characteristics I should mention.

Those Mancunians who live in Israel will all have known him, as he spent a great part of his life in Prestwich as Rabbi of the Prestwich Higher Synagogue and latterly Southport Synagogue. I can’t tell you of the number of ex-Brits who come up to me to say Rabbi Groundland married me, was at my brit, was at my children’s/grandchildren’s bat-bar/mitzvah, or looked after our simchas in Jerusalem when we came over especially for them, and gave us a wonderful feeling of occasion, and for the land of Israel.

When my own grandson, Matan, had his barmitzvah at the Wall, Rabbi Groundland made it such a special day by dancing all the men around the Torah and giving us his speciality of sharing in our joy.

Rabbi Groundland worked with Yad LeAchim, an organization bent on stopping the conversion of Jews to other religions. His tireless journeys to the USA went on for years and soon he was as well-known all over the States as he was in the UK. The people of Silver Springs especially loved him and sent numerous get well gifts including a large hand-knitted afghan, made with love, to keep him warm during his last months. As you may have read recently, Yad LeAchim is trying to find all the converts who were taken into churches, monasteries etc. and hidden during the 2nd world war, and as a result of which many Jews are now of the Christian faith, unbeknown to them that they were born Jews.

Rabbi Groundland left a devoted wife, Chana, was adored by his children and great/grandchildren and four brothers, one of whom is my husband Monty. He was a man of great faith and energy and of great joy in living his life. He gave himself heart and soul to every simcha, and with every troubled soul, he was there to listen and to help.

The world is certainly a poorer place without him.

Gillian Kenigsberg
2013-07-27
Hi Sara, I have never forgotten Rabbi Groundland nor has my brother. We went to the Higher Prestwich Synagogue and also to Heder. Everybody loved him. I knew he had made Aliya which he did I think after me. He was a modern Rabbi. I am a member of Esra and live in Carmiel and made Aliya in 1983 I think your article was in last months Esramagazine. I remember Rabbi Groundland as a young lively man with lots of black hair and his Scottish accent. He was at my wedding.
Eddie Cohen
2013-07-27
I was very sad to hear he had passed away - he taught me at Cheder, taught me my barmitvah
geoff libby
2014-01-20
my childhood at higher prestwich is filled with many fond memories
Alan Goldwater
2018-07-07
Rabbi Groundland just came to mind today and I happened upon this page. I have very fond memories of the man from my Prestwich childhood. From his fire and brimstone sermons, for instance on the iniquities of topless waitresses at the Jewish Workingmens' Club in the early 1970s to lecturing me on immorality after I'd sung my Barmitzvah piece, to his humour, and catchphrase in Heder: "I'll knock your nose off". Aside from the deep commitment to Judaism, something I didn't go along with even as a kid, what shone through was his essential kindness and humanity. Sure, maybe you'd pretend not to be in when you knew he was at the door asking for money for one of his causes, but you just loved him anyway. I am sorry he has gone from this world and wish his family well.
Leah
2019-07-31
I was looking online to see if I could find out if Rabbi Groundland, a'h was still with us. Sadly, I see that he is not. I remember meeting him in South Florida. He told me of the work he did. What a tzaddik. The world truly is a poorer place without him.

The Morman University Sunday Concert, with ESRA
Congratulations to ESRA Rehovot on its 10th
THANK YOU!
Bridesmaid recalls a very special day 59 years ago 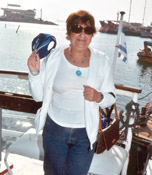 Sara came to live in Israel with her husband from Glasgow, Scotland in 1983. Her main interests are reading, walking and writing. She reviews the films shown at the ESRA Cinema Club, as well as wri...
More...