World of the Shtetl is Brought Vividly to Life 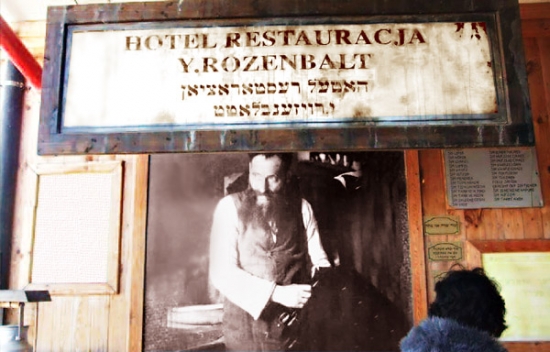 A small but very impressive Polish shtetl can be found in Kfar Hasidim, a religious agricultural community sitting in the shadows of the Carmel Mountains where the Jezreel Valley and that of Zebulun meet on the eastern outskirts of Haifa.

Kfar Hasidim was originally settled in 1924 by two groups of Hasidim from Poland together with their leaders, the rabbis of Kozienice and Yablonov. The moshav eventually became a member of the HaPoel HaMizrachi movement.  These days, homes of Israeli Druze are visible on the mountain peaks opposite the community with heavy traffic zooming along main highways on both sides of them, and nearby Arab villages spread, higgedly piggedly fashion, across a range of hills on another.

Not exactly the backdrop one would expect for a shtetl. But, at Yankele’s Shtetl in Kfar Hasidim, it is what it is in this creative showpiece of what Jewish life once was in the ‘Old Country’.

The recreation of a small Jewish town or village in Eastern Europe is the work of Israeli born Gad Yakobi, a gregarious, Yiddish language and culture-loving farmer, historian, klezmer and other Jewish music aficionado.  For an extended period Gad worked as an Israeli emissary in agricultural development in the former Soviet Union, during which time he also travelled extensively throughout Eastern Europe.  During this period he collected artifacts, small to extremely large, not enormous in size but overwhelming in historical and cultural value, and shipped them back home to his South African born wife (whom he met in the 1960s when she was working on a religious kibbutz) and their children at Kfar Hasidim.

Gad’s enthusiasm for introducing a taste of the rich past of Jewish life in the shtetl of bygone days to visitors in modern times, is a very special and unforgetable experience.  Equatable with stepping into a Dr. Who style time-machine, a visit to Yankele’s Shtetl at Kfar Hasidim immediately exposes one to a blast from the past of sounds, smells, and life-style of the mostly market town Jewish communities of the 19th and early 20th centuries, so brutally eradicated by pogroms and the Holocaust.

Many people hang their hat, or flat cloth cap, on the ‘Fiddler on the Roof’ version of life in the shtetl. In appearance Gad Yakobi—white whiskers, infectious smile, bright twinkle in his eyes, energetic arm movements and laughter emanting from somewhere deep down inside—could well be an extra in a modern day theater production of Jewish joy, suffering and long, agonising schlepps from a shtetl to a better life far, far away.

However, for Gad preserving the richness of Jewish life in the mostly impoverished shtetls of Eastern Europe is not just entertainment but steeped in a burning wish to have fellow Ashkenazi Jews maintain connections to their roots, to appreciate and grow to love their ancestors’ stories, prose, humor and music, as well as the culinary dishes handed down from generation to generation as the Jewish people dispersed throughout the world.

Greeting visitors, a shtetl style black hat sitting rakishly on his white hair, Gad—smiling broadly—hands out hot beigels from a large wicker basket to all who enter the world of  shtetl yesteryear in the Yakobi replica of what would have been the daily environment, sights, and sounds of many Israeli and Diasporan Jews grand and great-grandparents back in the day.

In an enormous converted sheep barn Gad turns the clock back with stories, music, and song.  The building comfortably seats 90, the visitors seated around long, wide wooden tables, the walls around crammed with emotion-tugging sepia photos of Jewish folk going about their daily lives in the shtetl.  There are also shelves packed to the last inch with cooking utensils and other everyday kitchen and household items of those times.

Surrounding the main recreated shtetl building are scores of waist-high models of narrow streets, wooden buildings, a flour mill, small shops, and a synagogue, as well as more everyday artifacts from those days, the likes of milk churns, wooden and metal buckets, and much more that would have been found in daily use in every shtetl community or hanging off the sides of their wooden wagons as they eventually fled to the unknown.

Signs in Yiddish advertising the shtetl butcher, baker, and candlestick maker amongst others are affixed to the walls of a large porch attached to the main building, Yiddish language posters advertising everything and anything already having one comfortably ease into the past, a plain white bench with curved back under a huge photograph of a busy shtetl market is labelled “The Shidduch Bench,” a smaller label underneath declaring it is ‘kosher.’

Seated comfortably in the shtetl cultural center, storyteller extraordinaire Gad Yakobi begins with the story of his own immigrant family, who hailed from Germany, and that of the founders of Kfar Hasidim.  He has the audience of elderly Israelis from a nearby kibbutz tapping their feet, clapping their hands as they sing along with him familiar songs from their childhood.

Before they know it, Gad opens their memory boxes—kickstarting long dormant lullaby tunes, Yiddish sayings and one liners, sharing and comparing stories of their own parents and grandparents who are long gone, but their rich historical and cultural inheritance kept alive—just needing a Gad Yakobi nudge to blow off the cobwebs.

Frank Mecklenburg
2019-09-16
Thanks for the nice article and we enjoyed it so much that yesterday we drove from Arad where we live to Kfar Hasidim and had a wonderful hour with Gad and experienced the Shtetl. Thanks for your writing this up.

Milestones 200
Kabbalah For All